I actually am a Klaroline fan but I'd still like to see what others opinions are(as well as see if there's any hope left for my pairing^^). This is what Joesph(Actor that plays Klaus) said in an interview concerning this:“There was this whole thing with him and Caroline Forbes, and I get asked a lot if there will be crossovers, if those characters have a future, and I don’t know. I know that he doesn’t have a sort of replacement love interest on the show.” This was on wetpaint under the Originals. So what do you think?

Lovehungergames2 wrote: I'm a klayley fan and I can't get my head over it that klaus and hayley are perfect for each other for example there both hybrids and they can't die so they have forever to be together, they are both parents of there daughter hope, the first thing in front of everything for them is family. This is really chessy but its true oh and in the facebook page for the originals in the symbology it shows something and it says "since klaus and hayleys relationship grows closer" and this is under klaus's symbology.

P.S  If you think Im crazy for the originals i'm not its just i needed to look up the scedule on the facebook page and I just happend to see it.

Klaus at this moment is too damaged to be with neither woman. However, JMHO, he is better with Cami because they have the most chemistry. It may be true that he and Hayley are both hybrids and Caroline is a vamp but Caroline is now with Stefan on TVD and the relationship between Caroline and Klaus ended. Sometimes opposites attract and he is attracted to Cami.

All I hear from klayley fans is they should be together because they are having a baby sorry but that is a weak argument . They have no chemistry compered to klaroline and Phebe in one of her intervievs said that klaus and hayley have no romantic interst in eachother they are just parents to hope and hayley is not a threat to klaroline.  I love hayley but klayley make me puke I ship klaroline and halijah because elijah has genuine filings for hayley not just because she is caring a baby like klaus he was ready to rip the baby out of her and let her die so dont start on how they care about eachother. If you havent notest after 2 seasons and that curse he put on her and her pack sorry not sorry  but its NOT GONNA HAPPEN . It will take at least half a season for her to forgive him so klaroline as of right now has more hope to happen than klayley. Keep calm klaroline is gonna hapen and you haters always say how klaroline is over well notice that they dont shut it down completly they said "for now" so stop trying to kill our ship.

Klaus amd cami chemistry dont make me laugh when i see them i yawn. She had  no storyline in season 2 at all she is pathetic  not caroline . Klayley has more fans than youre precious klamile so suck it. Klaroline all the way. 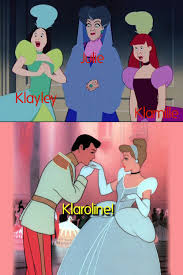 Klaus and Hayley make sense. As adorable as Caroline was it was a fantasy. Klaus is a killer, he comes within seconds of letting Caroline die because he wants revenge even though he cared a lot about her . In the long run there is no way Caroline could cope with Klaus and what he is capable of. Hayley is different. Her unique experiences (as a wolf orphaned and then rejected, as a hybrid with that particular combination of heightened emotion and rage) gives her an insight into Klaus and why he is who he is. She also actually listens to him when he confides and doesn't just dismiss his horiffic past with glib advice (like Camille and Caroline) . Klaus respects Hayley, as a fighter, as an alpha and as the mother of his child- He has fought her and he has cursed her but she has never allowed herself to be afraid of him and she continues to stand up to him. Hayley is deeply flawed (as is Klaus) but they are fiercly loyal to family and increasingly loyal to each other. Both Camille and Caroline betrayed his trust on numerous occasions and Hayley only ever did so once- and only for Hope's sake. Klaus was right and Hayley wrong back then but even he understands her motives and so he can forgive.

Hayley is one of the few people in a thousand years who Klaus has apologised too sincerely, without an agenda - he thanked her for her loyalty and gave way to her point of view. He chose to trust her judgement over his own... which is more than progress! They share great chemistry, a longing for family, a desire to be loved, they laugh together, share secrets and they actually see each other as they are, not as some idealised fantasy-for Elijah Hayley is some perfect thing to worship, for Camille and Caroline Klaus is a wounded soul capable of 'redemption'.. The truth is far more complex.  Throw in the 'little wolf' petname, the numerous 'Klaus's wife' jibes, the continuing references to 'king' Klaus and 'Queen' Hayley and its obvious that they could work as a real partnership.  Most importantly (lol) Hayly managed to make the ultimate big bad wolf wear a cap that said 'Mother Trucker' - this fact alone demonstrates her level of influence over him!

I have a couple of opinions on Klayley. First of all, I don't see their chemistry. Sure they have shared a few moments but I could not see them as a couple and I only see them as parents to Hope. I saw the chemistry in Klaroline and let me explain why.

Klaus and Caroline shared a few moments and those moments alone showed there was chemisty. Although Caroline showed him no affection besides the time they slept together think there is more to the story of why she hasn't been showing him that affection.

We have seen Caroline with multiple people (Matt, Tyler, Damon, etc.) and she had little cute moments with them but not as good as the moments with Klaus. Caroline probably didn't understand or know how to react when she realized Klaus was in Love with her and that could've been because of everything Klaus has done. He's hurt her friends and done rible things and she didn't understand how such a monster could love her.

With all honesty, I think Klaus and Caroline have a great connection. The look in her eyes as she looks at him is just amazing. She looks like she can't stop looking at him, as if he captured her and she can't look away. Deep down I believe Caroline has feelings for Klaus even if she hasn't shown them. Klaus is very intense and different from the guys Caroline has been with and she most likely didn't know how react so she kept it in. Caroline came to New Orleans looking for Klaus and she said it herself that she saw the good in him. She didn't know he good in him and she was scared of him even though he acted loving around her. She trusts him to keep her safe and they have built a bit of a connection.

I hate to see how so many people (especially the producers) gave up on Klaroline. I believe Klaus still loves Caroline and the fact he said he intends to be her last love says a lot. You don't just say that to someone and forget abount it and move on that quickly. I still think this couple is useful and can workout. If the producers thought it was really goodbye, they wouldn't have added the phone call scene in season 7 of tvd. Klaus has said goodbye to Caroline a few times and we have seen him appear again not to mention the proudcers wouldn't have added the "I intend to be your last love" sentence in there.

People will keep denying that this couple has chemistry but if you pay very close attention to previous tvd seasons where thre are Klaus and Caroline moments, you will see the connection.

I think that the whole Klaus and Caroline thing was a little forced. I mean, if you watch the part when he first shows his affections for her, you can see that it toally came out of nowhere. I know there are a lot of Klaroline shippers, and I'm not meaning to ruin that fantasy. But it just seems so unrealistic of them ever getting toggether. As much as I loved Stelena, it's obvious Stefan and Caroline are going to be endgame. Though it took Stefen a little while to grow feelings for her, anyone can tell that Caroline always had an affection for Stefan.

Now, Hayley and Klaus, I can kind of see. Think about how much Klaus and Hayley have grown as people, parents, and a set. They've become closer, and you can see a connection. I remember their fight scene. You know, the one Hope witnessed. Klaus didn't fight back. If it were someone else, he would've killed her. I think they have some up and downs, but they definitely have frown closer.

It is very unlikely that Klaus will end up with Caroline. The chances of him ending up with Hayley are not very likely either. Though, that's who I see him with next, if anyone.

I know a lot of people were shipping Elijah and Hayley. They would be cute. But, I feel like their relationchip was also forced. Not to mention the guilt Hayley feels when she looks at him.

Klaus and Hayley have something that no one else on the show has. A built up relationship. It is obvious that they find each other attractive, considering they seduced each other the first chance they got. They also have very high respect for each other. And have both had a history for protecting one another.

Yes, in the early seasons, you can see their dislike for each other. But don't the best relationships start out like that?

It appears that Klaus and Caroline, or Elijah and Hayley, had a simple relationship. Apart from the fact that Klaus tried murdering Caroline's friends and even Caroline at one point. They're affections for each other was quite obvious. But Klaus and Hayley are much more complex. I find that their relationship keeps me on my toes.

I think that if Klaus and Hayley were to get together, it would add something to the show. It's not impossible, seeing as the writers seem to like the idea of putting brither against brother for a girl.

Hayley said she liked Elijah because he was nice to her. Yet, she was drawn to sleep with Klaus when they first met.

Elijah might be nice, but he just doesn't seem to have the respect for her that Klaus does.

Please, consider these facts before deciding who you think should be with who.

A true romance should be built up. It should build up respect, trust, and connection between two people.

Anyone can see they have a connection. They both respect each other, even if they don't always agree. And they both have admitted to trusting each other.

It seems like the start of a really complicated relationship. Which of course, makes the show all the more interesting.