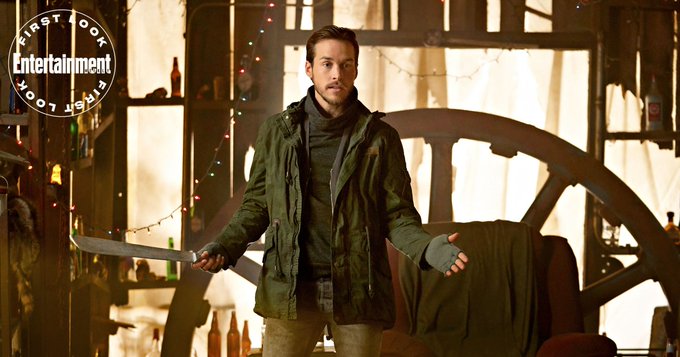 Kai Parker (Chris Wood} utters that line in Legacies' upcoming two-parter (starting Feb. 6), which features the return of his delicious Vampire Diaries villain. (And this time he has a beard!)

Kai first appeared in season 6 of The Vampire Diaries, as a member of the Gemini coven so evil they used magic to lock him in a prison dimension with no one to talk to (or harm). But you can’t keep a good villain trapped for long. Not only did Kai return for Vampire Diaries' final season, but now, nearly two years later, Lizzie (Jenny Boyd) and Josie Saltzman (Kaylee Bryant) are about to meet their uncle, and EW has the exclusive first look at his return.

“The prison world is inescapable up until now, so it’s not so much how he comes back into our fold as how we enter his,” Legacies showrunner Julie Plec says of Kai entering the picture. “It has a lot to do with Josie and the dabbling she’s been doing with black magic. It’s a consequence of those actions that leads them to the proverbial and literal door of the prison world.”

And seeing as how this week’s episode ended with the twins and Ric trapped in said prison world, it’s only a matter of time before the family members are reunited. However, a typical family reunion this is not. After all, this is the man who tried to kill the twins in utero and did kill their biological mom. According to Plec, the experience of meeting Kai will “rattle” the twins, particularly Josie, who sees him as “a mirror of what could be if she’s not careful.”

And no matter what he says or how he looks, know this: Kai hasn’t changed. As Plec puts it, “He’s forever an irredeemable a—hole… but he’s one of our favorites.”

This is awesome thanks Bennett! Glad to know he hasn't changed abit. 😎