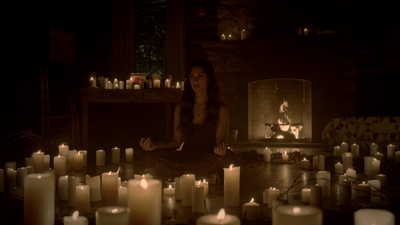 One of the defining characteristics of a witch is their ability to cast spells; a "spell" being the word used to signify the means employed to carry out a magical action. A spell could consist of a ritual action, a set of words, a verse, or any combination of these, many of which are archived in...

What is the spell where Hope exploded the car?

If the curse doesn't effect them and they each decided that they want children. They could still have them if they did a fertility spell. Like Hope and Freya could help Rebekah have a baby even it's a one time thing. Freya wouldn't be mean to her sister like Dahlia was mean to Esther. They could even help Davina do a spell to help her and Kol have a child if they want one.

When will the new spells be out?

I have no hate towards her but the thing is in my opinion, all this dark magic thing about Josie is a bit too much. I don't think she is the same anymore and I have been saying this since the beginning of the show and I still say it that we are not getting to see Hope's full powers. Also the spells they use are very simple spells and they are like the ones in the originals or the vampire diaries. Please share your opinion :)

What are the new spells in the last episode??

How did Alaric become human again in Season 6? Is it because of the barrier spell the Travelers put? If that was the case, why didn’t anyone else become human?

Why do the administrators not include spells in the spells and rituals such as non verbal ones like when hope switched her shoes with someone in the last episode or things like spells that only require hand movements or snaps?

In legacies we never actually see vampires wear or even talk about their daylight rings. Has it been forgotten or does the school have some sort of daylight protection spell. What are your thoughts

Could the Magic Purification Spell cure the Crescent curse?

For example a fully transformed werewolf would have set foot in Mystic Falls during the anti-non-traditional/traveler-magic zone. Would that have stripped away the Crescent curse and turned triggered werewolf back into untriggered one again?

Hi administration can you please send the new spells

In the previous episode of Legacies?

If a moderator could tell me the spell Josie did to turn on all the lights in the episode?

Josie SaltzmanSpells and RitualsThis Christmas Was Surprisingly Violent
This post is locked.

1. In episode ‘The Last Day’ Maddox used a compulsion spell on Carol Lockwood. Would that spell work on vampires and triggered werewolves?

2. When Hope will activate her vampire side, will she be immune to the Originals' mind compulsion power? She'll be a hybrid/ possibly tribrid of triggered werewolf, non-original vampire and with presumably still active witch side.

4. Would Marcel's bite be deadly to a witch-vampire hybrid?

Can anyone remember how bonnie becomes a huntress, as I'm trying to explain to my boyfriend and to be honest I can't even remember. Thank you for reading this post guys

What was the spell Hope used when she used some sort of magic ball and threw Landon across the field?

So I just rewatched the episode, and the first time, I didn't quite paid attention to the spell. After listening many time, I finally understood what she said.

-The Harae is an old japanese ritual of purification. Harae being the name of the ritual, I don't know if we can really translate it.

-" Tamai " mean to receive something. So since it's attached to " Harae ", it's the ritual that is received.

-" Yomigaerashi "seems to be inflexion of " Yomigaeru " that can mean " ressurected ", " Restored ", " refreshed "... and lot of other thing like this.

-" Tamae " added to an other word to turn it into and imperative way.

So the I think the spell could be roughly translite into " Receive the Harae and may your spirit be restored ! " or something like that.

I'm not a really a japanese speaker, it's just a traduction that I came with all my years of watching animes... but it seems accurate with the function of the spell.

I just thought it could be a fun fact to share.

I was thinking about this and I started do wonder, do you guys think Qetsiyah intended for the Other Side to serve as the world's default afterlife for all supernatural generations born after her or did she create it simply for Silas and the biggest consequence was that all supernatural beings would be trapped there after death? (Maybe nature tried to balance out such a huge spell and the only thing it could do is adapt and so every dead supernatural ended there) I mean, we've seen how complicated spells can be and this probably was among the most complicated ones ever mentioned in the show, so there's no way she didn't think about that part at least...

Just trying to break it down would mean she had to weave in dozens of spells into one big ritual to create the dimension. We've known from the start that witches are the only ones with free reign and obviously, it's something Qetsiyah made sure of to be able to speak to Silas. But I'm still curious, was she aware of what she was doing to the world when she made the dimension or did she not realize it was going to be the default purgatory for the next two thousand years for everyone, not just Silas?

So when Hayley was placed under the crescent curse her pack shared her fate due to the unification ceremony. Why when she is bound that they do not share her fate as this involves her wolf side?