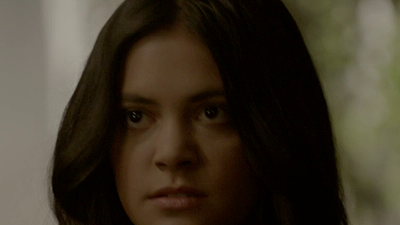 Inadu, better known as The Hollow (Louisiana Creole: Kre Nan Hun), was a powerful Native American witch that grew even more powerful in death, plaguing New Orleans as a spirit. She was summoned forth by Vincent Griffith many years ago and was served loyally by Eva Sinclair, who was corrupted by... 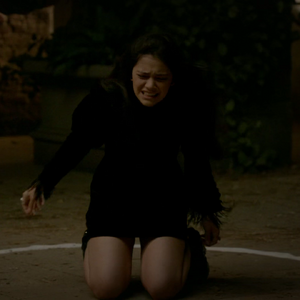 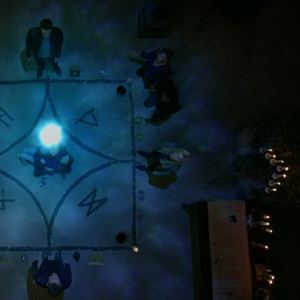 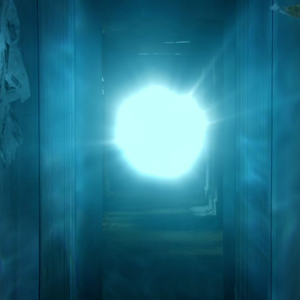 I don't know if anyone remembers that, but Dahlia was an extremely strong character to have such a weak death.

she was abused for years or decades by the vikings and yet she remained standing and strong. she helped her sister even after Esther chose to stay with the man who abused them. she had her life lost because of these abuses, as she was always branded as one of the most powerful witches in history and refrained from doing anything against Mikael because of the love that Esther had for him.

years later, tired of having this, she seeks revenge without being very noticeable. Freya says that the only way to kill Dahlia is with the ashes of a Viking, so Niklaus finds a way to kill Mikael, so Dahlia has her first revenge.

then, she destroys the indestructible white oak in an attempt to wipe out the people she "gave life to": the originals.

in short, Dahlia was one of the few most notable characters in this universe, but they were no good at developing or keeping her alive to fix many things.

Esther and she could live in a remote city and Dahlia could take Inadu's power for her, after that, they wouldn't have to kill the boys.

Just as Siphons are a subsection of witches who are likely to become vampires and still retain their power to practice, is it possible that there are werewolves who can complete the transition? I have been thinking well and if there is any kind of wolf was not featured on the show? , maybe foxes like in books that are like a subsection of werewolves maybe, jackals, hyenas, coyotes or "wild dogs", maybe a type of werewolf that was also cursed by Inandu and his followers long after the first werewolves of the Inadu tribe, who they were against their sacrifices and their followers cursed them for being a form of werewolf inferior to the traditional or werewolves who sought, with the help of witchcraft, to be superior to vampires. Could these werewolves perhaps become hybrids like Klaus easily, dying with vampire blood and completing the transition, It's possible? I would like to see the program explore this side of werewolves, perhaps revealing kinship to other wolf breeds, wolf cousins ​​or perhaps even bears in the evolutionary chain. Wolves and bears are related to distant primitive ancestors.

Niklaus MikaelsonHybridWerewolfThe Hollow
This post is locked.
The Hollow
Dahlia

I had a theory for the Originals. They said they needed someone of Mikaelson blood to take in the hollow in order to keep Hope safe. My thing is why didn't they resurrect Mikael because i mean the dude came back once before or even Esther who came back twice. I mean put all the dark magic in one of them and then kill them with the white oak stake that Klaus kept and then they would have been around for Hope and Klaus, Hayley and Elijah might still be alive. What do you guys think?

I have two questions

1. When Inadu died for the first time why didn’t she go to the Other Side?

2. Why was Her spirit a blue light because I don’t think they ever explained why her spirit manifested as a blue light and didn’t go to the Afterlife?

Is The Hollow a witch or a witch werewolf hybrid, because she has the crescent mark

I don't really remember where I can found the information, but we were told that even after all thoses years, Hope still had PTSD of being possessed by the Hollow when she was only 7 years old.

Yet this was shown neither In TO season 5, neither in Legacies. I don't think it's something really important in the storyline, but it would be nice to see some of that. I mean, Sofya who is a 500+ years old vampires discribed it as the most terrible thing she experienced. So for a 7 years old kid... It's weird that she didn't show any trauma.

I don't know but you guys didn't find the Labonair pack story a little silly ended up with the death of Hayley's parents shouldn't it be something big? after all were they werewolf kings should there be something about her living relatives or even Hollow's mother's point she still preserved her magic or just became a werewolf teaching what she learned to the remaining witches of the tribe that were not cursed? I'm definitely kinda crazy about these hybrid and witch stories so I think her pack has preserved that ability to control magic even after the curse starts and I think the gene is for a few witches it would make sense or some story about battle conquests and a lot of blood for who after all were the werewolf -kings right? Didn't they say it was a werewolf pack royality?

If you were one of the characters in The Originals, what would you do to defeat The Hollow? They say she can not be killed but we all know that magic always has a loophole . What are your thoughts? Thanks.

This includes TVD and both its spinoffs. I think the most evil is The Hollow, She was so power hungry and murdered kids and had no explanation for why. Dahlia, Kai, Eva also had murdered children, but at least there was reasoning behind it (doesn’t justify what they did, just shows there’s a reason behind why they did what they did, as opposed to Inadu who was evil for no reason). Eva was evil because the Hollow corrupted her and Dahlia had her heart broken by Esther. Kai was looked down upon by his coven for being a Siphoner. Some people worth mentioning are Klaus, Mikael, Katherine, Cade, Silas, Kol, and Wes. Klaus was abused by his father and was capable of empathy and love, as shown with people like Cami, Caroline, his siblings and obviously Hope. Mikael only became cruel after Freya supposedly died. Katherine had her entire family killed, her daughter taken away from her at birth, and was on the run for 5 centuries. Like Klaus, she obviously was also capable of empathy and love (Nadia and Stefan). Cade only became evil after his own people betrayed him. Silas and Kol both killed people with no remorse, but they both had people they cared for (Amara and Davina). Wes was human and obviously kiled nowhere as much people as the others listed, and he also showed genuine care for Aaron.

In The Originals, Dahlia and Inadu used Protection Totems that protects them from all harm, kinda like using representational magic but what confuses me, is how does a Protection Totem magnify a witches power? It's sole purpose is to protect a witch from all harm unless the totem is destroyed. Not magnify their power.

Why didn't the Hollow go to the Other Side after her death in the 5th century?

She was a witch, she should've been sent to the Other Side and to be with the Spirits.

Freya stated in “A Spirit Here That Won’t Be Broken” that Dahlia used protection totems similar to Inadu’s that magnified her power and made her unkillable, so why didn’t she just use these totems instead of casting the slumber spell which caused her to sleep for a century? The totem and the slumber spell are very similar in the aspect that they both a) grant the witch immunity to death and b) magnify the witches’ power. Did it have something to do with Dahlia wanting to link herself to Freya?

If these witches combined all their power, knowledge, brains, skills etc together could they defeat/kill/destroy every villain (Silas, The Beasts, Cade, Kai, the Heretics, Rayna, The Travellers, the Ancestors, The Strix, Katherine, The Originals, the Sirens etc) in the entire series? Would they win?

Who is more powerful on a scale of power? I am not speaking of your deeds, but of your powers in general.

Which witches do you think had the most impact on the world/show? This doesn’t necessarily have to do with power, since, for example, Dahlia was far superior to Esther, but Esther’s creation of vampires definitely effected the world/show a lot more. I think the witches that made the most impact were Qetsiyah (created the Other Side, immortality spell, the Cure), Inadu (was tearing New Orleans apart, created werewolves, put an end to “Always and Forever”), and Bonnie (saved the entire world when she destroyed Hell).

Who would win in a fight between the Hollow from The Originals and Silas from The Vampire Diaries?