20s Decade Dance was an event featured in the Season Three episode, Do Not Go Gentle. Caroline meant for the dance to be 1970's-themed, as the previous two Decade Dances had been the 1950s and the 1960s. However, Rebekah took over the committee and changed the theme to the 1920s, both because she thought it was classier, and because she knew it would annoy Caroline. During the dance, Caroline and Tyler danced together until Klaus cut in to dance with her, as he planned on leaving town afterward. The Mystic Falls Gang eventually ran into difficulties at the dance when Esther created a magical boundary around the school so that no vampires could leave and interfere with her plan, which was to use Elena's blood to turn Alaric into an Enhanced Original Vampire and a true vampire hunter that rivaled the likes of Mikael himself. 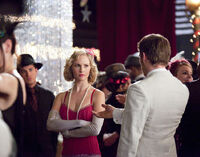 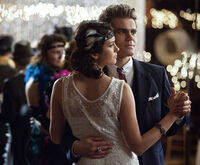 Retrieved from "https://vampirediaries.fandom.com/wiki/20s_Decade_Dance?oldid=2778346"
Community content is available under CC-BY-SA unless otherwise noted.