The 50s Decade Dance is an event in Mystic Falls High School near the end of 2009. The high school also does a sixties and twenties school dance. This event occurred in Season One.

Before the event Noah, a vampire, was in Elena's house. He had been invited in and Stefan and Damon decided that they needed to kill him that night. Damon, Elena and Stefan went to the dance to find and kill Noah.

Caroline and Matt's relationship went down, after she called Ben McKittrick, a washed up jock. Alaric and Jenna were chaperoning the dance, and they also danced there. Bonnie asked Ben on a date and he accepted. They liked each other, but when she kissed him, she felt that he was a vampire.

Anna asked Jeremy to give her the journal and he saw her eyes. It is shown that Noah, Anna and Ben are working together to get the journal to try to open the tomb.

Noah called Elena to exit the room or he would kill her brother, Jeremy. She did it, he attacked her but she stabbed him with pencils and Stefan and Damon showed up. He told them to find Emily's grimoire that they had to find Journal first. Damon and Stefan were torturing Noah, and when they asked who was helping him, he refused to answer so they staked him. Alaric was passing by and Damon attempted to compel him to see if he knew anything, but Alaric had vervain clutched in his hand so it didn't work. 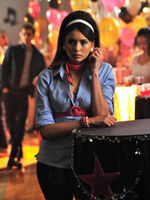 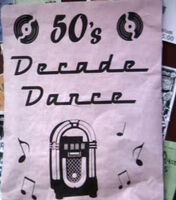 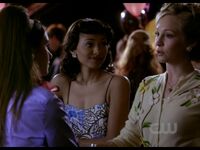 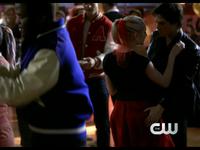 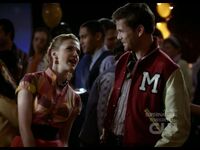 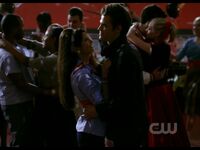 Retrieved from "https://vampirediaries.fandom.com/wiki/50s_Decade_Dance?oldid=2766630"
Community content is available under CC-BY-SA unless otherwise noted.