Follow Jason as he tracks down the man who killed his sister.

We open the episode by a flash forward to the Pilot and see Vicki Donovan being awoken after being attacked by Damon Salvatore the screen quickly flashes to a shot of Joanne Harris who appears to be dead or mortally wounded, possibly attacked by a vampire. We see Jason Harris introduce the audience to his sisters storyline via a laptop. He explains that his sister used to have a neighbor: Stefan Salvatore. According to Jason his sister was murdered by Stefan and he claims to be able to prove it. Therefore he followed Stefan from New York City to Mystic Falls. After a few establishing shots we see Jason set up a camera at Mystic Grill. He approaches a waitress and asks for the location of the Salvatore Boarding House. The waitress asks him whether he really wants to stay there causing Jason to dig deeper and asks why. The waitress explains that it's possibly the creepiest place in the whole town and adds that all the inhabitants have been kicked out by Zach Salvatore anyway 3 months earlier, apparently he is visited by a few family members. Jason leaves the grill and records himself on his camera again talking about how Stefan moves around a lot. He says that Stefan moved around about seventy times in the past forty years, he then shows an image of Stefan on his phone. Not showing a man aged appropriately but a young teenager. Jason goes on to explain that Stefan is a vampire before revealing a stash of stakes and garlic in the back of his car indicating that he plans on killing Stefan.

Jason: "Hi, I'm Jason Harris. This is Joanne, my sister. She had a neighbour. Stefan Salvatore. He's the one who killed her, and I can prove it. That's why I followed him all the way from Manhattan... to here."

Hostess: "Welcome to Mystic Grill."
Jason: "Hi, I'm actually looking for the 'Salvatore Boarding House'?"
Hostess: "Are you sure you wanna stay there?"
Jason: "Why not?"
Hostess: "Because it's the creepiest place in Mystic Falls. At least that's what everybody that lives there and drinks here says. Plus, I can ask, but I think it shut down about three months ago."
Jason: "What happened three months ago?"
Hostess: "The guy that owns it, Zach Salvatore, just kicked everybody out. He had family coming home." 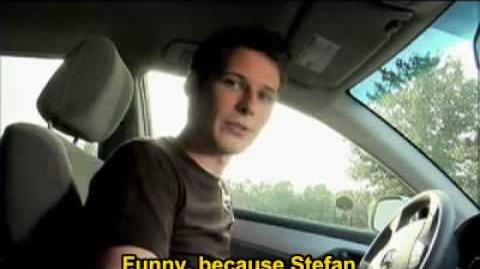 Retrieved from "https://vampirediaries.fandom.com/wiki/A_Darker_Truth_(Part_1)?oldid=2741183"
Community content is available under CC-BY-SA unless otherwise noted.