Jason makes a gruesome discovery in the forest.

Jason films Stefan as he jumps from the top of the Salvatore Boarding House and lands on the ground without any injury. He follows him into a forest while not being able to hold his shock and excitement. While walking through the forest he wonders about the girl or why the cross, garlic or holy water did not work on Stefan. He also is confused about Stefan being able to walk in the sun and grows insecure about the stake probably not working. As he sits in the woods he talks about his insecurity and the discouragement of not being able to hunt 'Dracula'. He grows more sure of Stefan being his sister's murderer though. As he comes to that conclusion, he's shocked to see a torn up rabbit, he approaches it and runs through the forest finding another rabbit next to two torn up wanderers. In a quick flash forward we see Vicki Donovan again standing in the fog as the fog around Jason draws closer. We also see another flash forward to Darren Malloy and Brooke Fenton being attacked by Damon Salvatore. Instead of being discouraged, Jason is sure that he has to kill Stefan. As he talks to his camera something is watching him behind a tree. 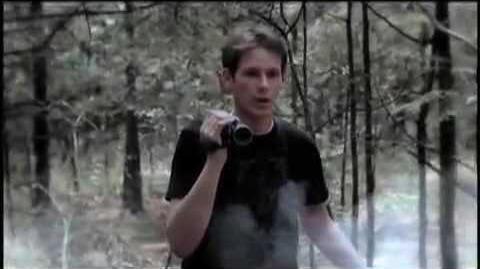 Retrieved from "https://vampirediaries.fandom.com/wiki/A_Darker_Truth_(Part_3)?oldid=2462220"
Community content is available under CC-BY-SA unless otherwise noted.