Jason finally solves the mystery of his sister's death at the hands of a vampire.

Jason enters Stefan's room in the Salvatore Boarding House again and notes that it's still empty so he draws the conclusion that Stefan must still be out there hunting. As he hears a noise he quickly turns around but notes that nothing is there. He keeps on walking through the room noting how much more powerful Stefan is than he originally thought. He talks to his camera and says that while he might not be strong enough to kill him he is efficient. He puts a canister of gas on Stefan's table but is shocked by another noise behind him. It turns out to be 'just a crow.' He turns back and sees a news article about his sister's murder among Stefan's paperwork. Angered about Stefan having saved this cruel memory from his past he gets up not noticing that something is watching him. He then sees a person in the shadows, silently laughing. It isn't Stefan so he asks him who he is and what he is doing there. The man asks Jason if he knows it's rude to enter uninvited. As the man comes closer Jason orders him to stop, but the man ignores him. Jason realizes that it was this man that murdered his sister. The man speeds towards Jason and grabs his throat. It is revealed to be Damon. He chokes Jason and drops him to the floor and picks up Jason's camera. Damon tells the dying man to say hello to the people of Mystic Falls and to say goodbye. 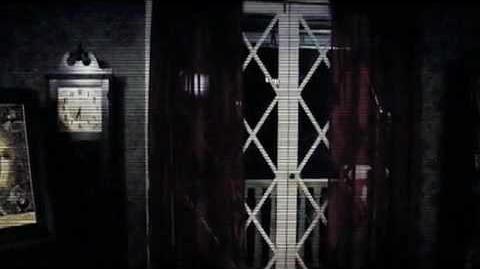 Retrieved from "https://vampirediaries.fandom.com/wiki/A_Darker_Truth_(Part_4)?oldid=2460020"
Community content is available under CC-BY-SA unless otherwise noted.