MOTHERS, BACHELORS AND BLOOD — Matt and Caroline are surprised by the sudden reappearance of Matt's mother Kelly. Stefan and Elena are worried about Damon's new attitude. Damon is asked by Sheriff Forbes to take part in a fund-raising bachelor auction. Alaric discovers shocking secrets from his own past. With help from Jenna and Stefan, Elena is determined to find out everything she can about her birth mother, but the truth may be more than she can handle.

The episode starts with Harper, the vampire who got out of the tomb attacking a hiker and then stealing his clothes. He gets out of the woods and gets to the town looking lost in the modern world. He sees a woman sitting on a bench who nods to him and he nods back.

Jenna found information about Elena's birth mother and she informs her. There is a friend of her mother who lives nearby, Trudie Peterson. Jenna also tells Elena that Alaric's wife's name was also Isobel and she is dead but she does not know if it is the same person. Elena tells Stefan about Trudie and Alaric's wife and he asks her if she will go to visit Trudie to let him go with her. Meanwhile, Jenna meets Alaric at school and tells him about Elena's birth mother. He says that his wife didn't have any kids but when Jenna shows him a picture of Elena's mother he leaves in shock.

Damon tries to deal with the truth about Katherine on his own way; partying with girls. Stefan interrupts them because he wants to ask him about Isobel but Damon says he does not know her and goes back to partying. Meanwhile, Caroline is with Matt at his place and while they are making out, his mother Kelly gets in. Caroline leaves and Matt catches up with his mother.

Elena goes at Trudie's house to ask about Isobel and Trudie, who realizes that she is Isobel's daughter, lets her in. Trudie texts someone: "She is here" and while they are talking, she makes some tea to drink. Elena figures out that she put vervain in it and realizes that Trudie knows about vampires but when she asks her, Trudie asks her to leave. As Elena makes her way to her car, she sees a man standing in the road looking at her. She takes off before the man approaches and later she tells Stefan all about it. Stefan tells her that Alaric thinks his wife was probably killed by a vampire but does not mention that it was Damon and asks her to wait a little before talk to him.

In the meantime, Alaric meets Stefan to talk to him about his wife and if he found out anything since he promised to help him. He wants to know what Damon did to Isobel but Stefan tells him that Damon says he does not remember her and he asks for a picture of hers to show it to him. Stefan shows the picture to Damon but he still says that he does not know her. In a flashback, we see that Isobel was investigating vampires and she was obsessed with finding the truth.

Damon goes to the Grill's bar for a drink and Alaric is there. They talk for a while before Alaric leaves and Liz appears. She wants to ask Damon to be one of the bachelors at the Founder's fundraiser and he accepts. In return, he asks her help on finding information about Alaric because he does not trust him. Meanwhile, the mystery man Elena saw outside Trudie's house now knocks Trudie's door asking about Elena. Even though Trudie tells him what he wants, the man kills her.

At the Founder's fundraiser, Liz gives Damon the info he wanted about Alaric and he realizes that Alaric's wife is the woman Stefan was asking him about. The Bachelor Raffle begins and Mrs. Lockwood introduces the bachelors. When she goes to Damon, he starts talking about Alaric's wife and that once they drunk together and that she was delicious. Alaric tries to stay calm and Elena is horrified while she realizes that Damon was the vampire who killed her mother.

Elena runs outside and Stefan follows her telling her that they do not know for sure if Damon killed Isobel because her body never found. While they talk, the mystery man who killed Trudie, shows up and tells Elena to stop looking for her because she does not want to know her. Elena tries to ask him about Isobel but Stefan figures out that the man in under compulsion and she just tells him that she will stop. As soon as she tells him that, he steps in the middle of the road and a truck hits him. Elena takes his cell phone from the ground and she and Stefan go back inside. There she runs into Damon who can't understand why Elena is so mad at him, until she tells him who Isobel was.

Alaric, leaves the fundraiser and goes to the Salvatore house to find Damon holding a stake and ask him about Isobel. Damon tells him that he did not kill her but turned her since Isobel came to him begging him to do it. Alaric attacks him trying to stake him but Damon gets the stake and kills Alaric. Stefan arrives and sees Alaric dead lying on the floor. Damon tells him that Alaric attacked him and now that he knows Isobel was related with Elena believes that somehow Katherine sent her to him for a reason and he leaves.

Stefan stays with Alaric's body when suddenly Alaric comes back to life. They are both shocked and Stefan believes that someone must have given him vampire blood and they turned him. Alaric remembers a conversation he had with Isobel when she gave him his ring and told him that it was a gift to protect him and he tells Stefan that it was the ring that somehow protected him.

Elena is back at home and dials the last number the mystery man called from his cell. A woman's voice answers asking if there was a problem and if he found her. Elena realizes that is Isobel but the moment Isobel hears that is Elena, she hangs up the phone.

The episode ends with Harper arriving at a house at the woods. He knocks and the woman he saw sitting on the bench opens the door and then calls for Pearl. Pearl comes and greets Harper with her daughter, Anna. Along with them comes a woman who Pearl asks her to invite Harper in.

Elena: "When was the last time you saw her?"
Trudie Peterson: "About seventeen years ago, when she left to go have you. We kept in touch for a while, but you know people drift apart."

Matt: "So, where have you been?"
Kelly Donovan: "Here and there. Never one place too long. You know Pete."
Matt: "No actually, I don't because, you've never brought him around."

Stefan: "I asked Damon without saying too much. He doesn't remember."
Alaric: "Ask him again."
Stefan: "Damon is not stable right now."
Alaric: "You know he murdered my wife, or at the very least made a meal out of her. When has he been stable?"

Sheriff Forbes: "Oh, come on help me out. Carol Lockwood won't let me live it down if I come empty-handed."
Damon: "You know, a room full of women clamoring to win a date with me? Sounds tasty."

Elena: "He's fine."
Stefan: "He's Damon."
Elena: "Maybe this heartache will be good for him-- it will remind him that he has one, even if it doesn't beat."

Carol Lockwood: "Do you have any hobbies? Do you like to travel?"
Damon: "Oh yeah. L.A., New York-- a couple of years ago I was in North Carolina, near the Duke campus actually. I think-- I think Alaric went to school there, didn't you Ric? Yeah, except I know your wife did. I had a drink with her once. She was--she was a great girl. Did I ever tell you that? 'Cause she was delicious. Mmm, mmm, mmm."

Damon: "This is a shame. We're kindred spirits bitten by the women we love. Unrequited love sucks. Sounds like I got a lung, which means I get to sit here and watch you die."

Stefan with Alaric about Damon 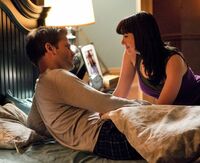 Alaric in bed talking to Isobel

Retrieved from "https://vampirediaries.fandom.com/wiki/A_Few_Good_Men?oldid=2788138"
Community content is available under CC-BY-SA unless otherwise noted.