THE STRIX — In order to uncover what his old acquaintance Tristan is really up to in New Orleans, Elijah considers attending a gala thrown by a mysterious group of ancient vampires known as the Strix, while Hayley invites herself to attend with him. There, Marcel is approached with an enticing offer made by a mysterious woman named Aya, but he quickly realizes that things are not always what they seem. Elsewhere, when a vital component of Lucien's plan goes missing, he and Klaus form a tentative alliance in order to find it. Freya also appears.

Across town, Marcel is jogging and on his way back to his place. He sees a suit with a mask on display, and gets a call, initially assuming it to be Aya. But it's Tristan, and he invites Marcel to a party, as he's seen him as worthy enough to join The Strix.

Elijah is at the fight gym blowing off steam. Hayley walks in and asks about The Strix and Shi Tristan is, holding up an invitation to a party. Shortly after, they're at the compound with Freya and Klaus, and Klaus tells her about the prophecy of their doom.

Klaus asks Lucien for his help and resources, but Lucien finds Alexis missing. Klaus calls Freya for help, and she locates Alexis at the same location as Tristan's party.

Aya shows Marcel around, while Hayley and Elijah arrive. He reveals he created The Strix because he wanted to gather people who were curious about the world and eager to improve it, but Elijah abandoned them because he'd realize what he created were a legion of egomaniacal sociopaths.

Aya says The Strix want Marcel because he's clever and talented, and want to help him improve. They also want to bridge the gap between the sirelines, as Marcel will be the first in their organization to be from Klaus' sireline. She introduces him to Mohinder, a vampire who taught her combat, and only feeds on the vampires he's defeated.

While dancing, Elijah spots Marcel and realizes it's an initiation, not a party. Tristan comes in, and he starts the test, stating that Marcel's daylight was taken and he has to find out who took it and fight for it. If he wins, he becomes one of them, but dies if he fails.

Marcel corners Aya, telling her that at least his vampires have rules—no one kills another vampire. But Aya reminds him that death is inevitable even for vampires, and acknowledging that makes their long life more intoxicating. He kisses her, looking for his ring, assuming it's on her. But Aya doesn't have it, and wishes him well on finding it.

Lucien and Klaus crash the party, acting drunk, and insulting Tristan's party and the wine. Freya sneaks away to find Alexis, but seeing visions of the Mikaelsons' downfall, she doesn't want to go back to Lucien. She shows Freya visions too, of Freya being buried alive. Freya knocks her out.

Aya and Tristan take Marcel to a room, where he must now tell his answer since dawn is nearly approaching. He chooses Aya. She doesn't have his ring, but she took it and gave it to Mohinder, whom he fights. Mohinder drinks his blood, which Marcel laced with wolf venom from Hayley. But he doesn't kill Mohinder directly, saying the Strix must do it himself. Tristan rips out Mohinder's heart, and tells Marcel he his restraint and refusal to kill without cause is a rare integrity. This was the test. He welcomes him into The Strix.

Klaus gives him his blood to heal him, but not before rebuking Marcel for assuming Klaus would open his veins for him in the aftermath, after choosing The Strix whom are conspiring against him.

To understand what will cause their doom, Hayley and Elijah feed on Alexis, but they spit it out while Alexis vomits blood. She had been poisoned. A flashback shows Aurora, masked, had put it in her wine.

Later that day, Aurora walks across town happily, out of her mask but still in her fancy dress.

Tristan (to Marcel): "It's an invitation. Join us."

Hayley: "What exactly....am I walking into tonight?"
Elijah: "Only the most dangerous, influential, congregation of vampires the world has ever known."

Tristan (to Marcel): "If you feel you'd be a worthy addition to our rank, join us."
Hayley: "What exactly....am I walking into tonight?"
Elijah: "We're going to the most dangerous, influential, congregation of vampires the world has ever known."

Aya (to Marcel): "We're at the top of the food chain and we take what we want."

Hayley: "Elijah, what's wrong?"
Elijah: "This isn't a party. It's a initiation."

Klaus: "What are you doing here?"
Freya: "I live here?"
Klaus: "Yes obviously, I just hadn't realized that you were back from wherever it is you go to when you leave. Perhaps I was thrown off by the lack of strange gentlemen callers pursuing the contents of my refrigerator this morning."
Freya: "Your concern for my whereabouts.... is touching."
Klaus: "I simply want to know who is here at any given moment, I hardly think that's too much to ask."
Hayley: "Well, as long as we're taking attendance....."
Klaus: "Oh good, it's my not so loving elder brother and my former one night stand. What a nice normal family gathering."
Hayley: "Charming. Elijah was just catching me up on how you have no clue on which one of your long lost buddies you can trust and which one is trying to kill you."
Klaus: "Well clearly what the situation needs is more opinions. (To Elijah): I assume you told her about the bloody prophecy."
Elijah: "I was just getting to that."
Hayley: "Now would be good."
Klaus: "Well it appears that my old mate Lucien has a genuine seer and in a effort to prove his good intentions, he got her to show us some rather dire visions of future doom. It's grim stuff really, not for the faint of heart."
Hayley: "Whose doom are we talking about? Because if it's yours, I think we're all okay with it."
Klaus: "Well sadly, we're all on the chopping block. But chin up, this witch claims her visions are constantly evolving so you may just get your wish."

Marcel: "By all means, help yourself to the good...stuff."

Tristan (to Marcel): "It's an invitation. I believe that Aya... told you a bit about the Strix."

Hayley (to Elijah): "I was picking up Hope when some random vampire dropped it off."

"Happy Idiot" – TV On The Radio

"Holding On To Hell" – Gin Wigmore

The Originals A Walk on the Wild Side Trailer The CW

The Originals A Walk on the Wild Side Clip The CW

The Originals Inside A Walk on the Wild Side The CW 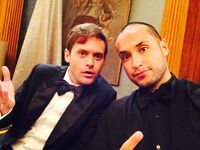 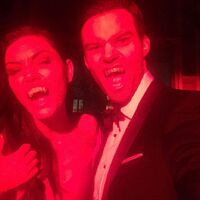 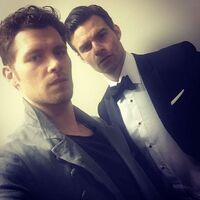 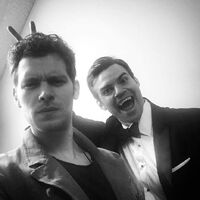 Retrieved from "https://vampirediaries.fandom.com/wiki/A_Walk_on_the_Wild_Side?oldid=2785444"
Community content is available under CC-BY-SA unless otherwise noted.