Abby Bennett Wilson is a character who first appeared in the twelfth episode of the third season of The Vampire Diaries. She is the daughter of Sheila Bennett and the mother of Bonnie Bennett. She was born in Mystic Falls Hospital, attended Mystic Falls High School from 1984 to 1988 and was best friends with Miranda Sommers (Elena's adoptive mother and Jeremy's biological mother) and possibly Kelly Donovan (Matt's mother) along with Liz Forbes (Caroline's mother). Abby was a witch, but when she abandoned Bonnie to successfully imprison Mikael, her magic was weakened to the point where she could no longer use it. She was then turned into a vampire, by Damon Salvatore, to prevent Esther from killing the Originals to save Elena Gilbert. After adjusting to her new life, Bonnie makes a statement that Abby actually enjoys her vampirism and she is still a part of Bonnie's life.

Abby is a member of the Bennett Family.

Abby was born to Sheila Bennett and an unnamed father on August 16, 1972, at the local hospital in Mystic Falls, Virginia. After the arrival of a diabolical vampire named Mikael, Abby Bennett was forced to abandon her family and friends in her attempt to imprison the Original inside of an ancient tomb. Although Abby's plan was a success, due to the over-exerted dark magic needed to sedate Mikael, Abby has since lived without the aid of witchcraft. She had a short relationship with a man who had a son named Jamie. When he left, she took Jamie in and has raised him as her own.

Bonnie is visited by one of Klaus' hybrids while trying to figure out how to open the coffins in which Klaus carries the members of his family. After a dream of Abby helping her, Bonnie and Elena decide they need help on how to open one of the coffins. They suggest that they should go visit Bonnie's mother and look up every Abby Bennett in the area. They eventually find her and decide to go see her. They meet the boy she took in, Jamie. Abby does not recognize Bonnie at first. She is very welcoming to Elena and Bonnie and makes them food, which she considers an ice breaker and a piece of goodwill. Bonnie, still angry with her, tells her they only came for help. Abby informs them of her loss of magic and her friendship with Elena's mother, Miranda. Later, Bonnie and Abby discuss the past. She tells of her reasons for leaving. Mikael came and she lured him away. She entombed him, but it drained all of her magic. Wanting a new life, she started over as Abby Wilson. Bonnie sadly tells her of Grams' death.

Abby subdues Bonnie with magic-muting herbs when Bonnie turns her back. She takes Bonnie to Klaus' hybrid because Jamie is compelled and will shoot himself if Bonnie fails to tell them the location of the coffins. She secretly tells Bonnie to warn her friends. Abby later tells Bonnie that her magic had been starting to fade the farther she got away from her and perhaps it was "Nature's way of punishing me for leaving you."

Together with Bonnie, she has to open the sealed coffin. They found a spell to unbind something but were trying it for over an hour. Abby kind of gives up, but Bonnie gets her to continue. Finally, Bonnie and her do the spell again and Bonnie has to go away. Abby realized that the coffin was opened and is later found knocked out with Bonnie by Damon and Esther, who was in the coffin, is gone.

Later, both Abby and Bonnie were visited by Esther for aid to exterminate the Originals by channeling the power of the entire Bennett bloodline. As Esther's plans became endangered, so did the lives of Abby and Bonnie as Elijah demanded Stefan and Damon kill the two witches (believing it to be the solution to prevent Esther from channeling them) or Elena would be killed by Rebekah. When Esther was confronted by her three sons, Bonnie and Abby fled to the abandoned house, seeking protection from the witch spirits.

To Bonnie's surprise, Stefan appeared and explained to her that he needed to find a way to prevent Esther from channeling the Bennett bloodline. Shortly after, Abby was unexpectedly fed Damon's blood. Damon then killed her, turning her into a vampire. The Bennett line was severed as one cannot be both a witch and a vampire, thus thwarting Esther's ritual. Abby's body is later seen, with Bonnie at Caroline's while 'transitioning' into a vampire.

In Break On Through, Abby accidentally bit Jamie and then left Jamie and Bonnie afterward.

In Before Sunset, Bonnie calls on Abby to help her with the desiccation spell to use on Alaric; the same spell she had previously used to entomb Mikael. After getting inside the Salvatore Boarding House, Damon offers Abby some blood to drink, but Abby was still mad at him for turning her into a vampire. She then explains to Bonnie how the desiccation spell works.

In A View to a Kill, Abby surprisingly appears at Bonnie's doorstep as she was attempting to leave against her father's orders. It was revealed Rudy called her to join the family meeting which was an intervention for Bonnie. While there, she had a brief confrontation with Jeremy Gilbert, though Bonnie was able to calm him down before anyone was harmed. Bonnie informed Abby (and Rudy) that she was very capable of handling her power and revealed to Abby that she was the key to reverting her vampirism. While initially relieved at the possibility of being cured, she quickly dismissed the idea to save her daughter from self-destruction. Using magical herbs, she neutralized Bonnie and later prepared additional herbs to subdue her until they (with the help of other witches) could erase Bonnie's knowledge and power of Expression. Before she could finish her preparations, Bonnie awoke and destroyed the vials and threatened Abby. Bonnie announced her broken allegiance with the spirits and left to help Elena.

In Because the Night, Rudy calls Abby to tell her that Bonnie needs the help of a lot of witches to cleanse her from expression.

In A Bird in a Gilded Cage, Bonnie tells Damon that she found the the Cure for vampirism in the 1994 Prison World and that she had planned to give it to her mother but found that Abby was surprisingly happy as a vampire so she decided to give it to Damon instead.

In What Are You?, she arrives at Bonnie's house and tells her that Caroline called her, as Caroline was hoping if she didn't want to talk to her, but she could talk to her mother instead. Bonnie forgives Abby for abandoning her and hugs her. Abby begins to consecrate Enzo's body for burial, and Bonnie states she feels he's trying to reach out to her, but she puts as just grief, and Bonnie states she's felt grief and that's not it. Abby states it's impossible since the destruction of the Other Side and they start a seance. When the wind picks up and she sees Bonnie and Enzo's pain the day he died, and Bonnie thinks he might be in Hell. Abby states that whatever darkness she reached into it's reaching back for her, and says they need to bury his body and close the door. When Bonnie is overwhelmed by an unknown force and it's starting to kill her, she burns Enzo's body and blows out the candles. When Bonnie wakes up, she is angry, but Abby states that she has failed her too much to let her destroy herself and Enzo wouldn't want that for her.

Born in the picturesque town of Mystic Falls, Abby is a very charismatic and down-to-earth young woman who loves nature and cares deeply about her family and friends.

She stills maintains her old personality as a witch, but is upset she can no longer communicate with nature and is angry with Damon for turning her. She cares a lot for her daughter's well-being and even came into contact with Rudy to help Bonnie be cleansed of expression.

Abby is a beautiful woman with almond eyes and long, brown hair. She has an athletic build and somewhat tall stature, and wears a wide range of different clothing.

Abby once possessed all standard powers and abilities of a human/witch. It should be noted that she once encountered the most ruthless and arguably the most powerful Original vampire, Mikael, and lived to tell the tale, by subduing and desiccating him using dark magic. After performing such magic, it weakened her, culminating in the lost her basic abilities to be able to cast spells. She initially believed she lost her magic because Nature was punishing her; however, it was her subconscious guilt of abandoning Bonnie. Only with the help of Bonnie was she able to regain her powers and, together, was able to free Esther from her coffin.

After becoming a vampire, she lost her magic and her connection to Nature entirely.

Abby possesses all the standard powers and abilities of a non-Original vampire.

Abby has the typical weaknesses of a witch.

Abby has the typical weaknesses of a non-Original vampire. 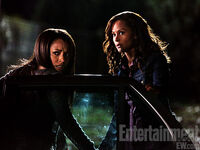 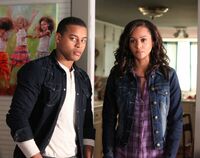 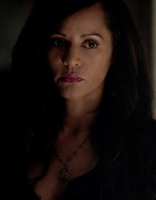 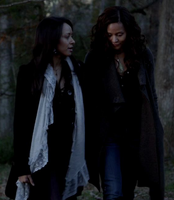 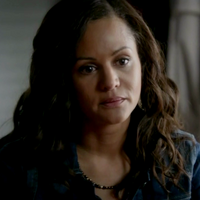 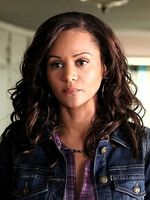 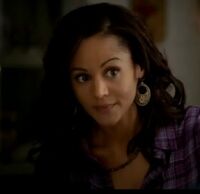 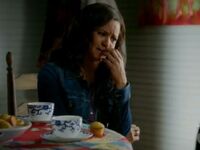