Abigail was a witch who first appeared in the fifth episode of the first season of The Originals. She was chosen by the French Quarter Coven Elder Bastianna Natale as one of Harvest girls to participate in the Harvest ritual. However, the ritual was delayed and she spent over a year with the Ancestors on the Ancestral Plane. She was eventually resurrected after the completion of the Harvest with Genevieve as the new coven leader. In From a Cradle to a Grave, she was murdered by Niklaus Mikaelson during a failed attempt to sacrifice and consecrate Hope on Esther Mikaelson's orders.

Nothing is known about Abigail’s history prior to being selected as the French Quarter Coven’s Harvest witch. She was friends with Monique Deveraux, Cassie, and Davina Claire. During the Harvest Ritual, she and her friends, except Davina, were sacrificed and the three of them spent their time with the Ancestors on the Ancestral Plane.

In Après Moi, Le Déluge, her corpse laid with the bodies of the other dead witches as the Mikaelsons and Sophie attempted to complete the the Harvest by sacrificing Davina. However, with Davina's death, neither she nor the other witches were resurrected and remained on the Ancestral Plane.

In Moon Over Bourbon Street, after a month had passed since her return, she, Monique and Davina practiced their magic by reviving roses at the Lycée. Unfortunately, Davina's lack of confidence kept her from being able to magically revive her rose, but Abigail encouraged her to try harder. Later, she attends the faction party with Davina, Monique and Genevieve.

In The Big Uneasy, she attempts to interact with the Ancestors with Davina and Monique in one of the tombs at Lafayette Cemetery. Monique successfully communes with the Ancestors and explains to them that it's time to complete the Reaping and resurrect Cassie - it's time for Genevieve to die.

As a Harvest girl, she and the others are paraded around and the center of attention for the Fête des Bénédictions. Genevieve gathers with the Harvest girls, declaring to the crowd that the witches of New Orleans bless them all. Each of the girls promptly represent an element and showcase their magic. Abigail commands a brief but powerful gale of wind. As the celebration continues, the Harvest girls partake in the time-honored tradition of gift-giving and the crowd delivers their offerings to the witches. With the celebration ending with compelled human drummers being sent from Marcel, she and the others were escorted out as it resulted in bloodshed.

In A Closer Walk With Thee, Abigail walks down the street with Monique, Davina, and Genevieve. Genevieve lectures them about their magic and explains to them that New Orleans is full of ghosts and their dead are always there, hovering. When supernatural creatures die, they're doomed to spend eternity alone, watching the world go on without them. However, for them, they linger in a different way, consecrated in the earth, replenishing its power for the Ancestral witches. Davina inquires about humans, but is saddened that they perhaps find peace. She sends them back to the Lycée where Davina decides to perform a seánce in an attempt to contact Tim. Abigail is reluctant at first, believing that the Ancestors wouldn’t like them messing around in the spirit world, but Davina manages to convince her otherwise. Their attempt, however, instead caused Mikael to be able to contact Davina with Abigail completely unaware of his presence.

In From a Cradle to a Grave, Abigail assists Genevieve and Monique and the other witches in delivering Klaus and Hayley's baby daughter at St. Anne's Church. Klaus attempted to rescue Hayley and his daughter, but she and Monique quickly subdued him with their magic as Hope was born. After Monique murdered Hayley, they broke Klaus' neck and left him temporarily dead on the floor.

Making their way to Lafayette Cemetery, Genevieve prepares for the sacrifice. She's confident that Genevieve will go through with it as the Ancestors promised her that she'll be able to keep her life. Monique expresses her frustration about their promise to them. Four Harvest girls were sacrificed and four girls should be returned. The Harvest was hijacked and now their friend has remained dead. She hopes that Genevieve doesn't perform the sacrifice so she and Abigail can do what the Ancestors want and they'll get Cassie back.

With the time to perform the sacrifice upon them, they head to their altar and begin the spell to contact the Ancestors. Their sacrifice, however, was interrupted by Klaus, Elijah, and Hayley, newly in transition. She and Monquie joined hands and channeled the powers of the Ancestors, keeping the Mikaelsons at bay. Monique believed them to be fools to come against them in their place of power in their strongest hour. The Mikaelson didn't just face them three, they faced them all. She and Monique are surrounded by the Ancestors and channeled their power. Klaus retaliated and threw a metal fence post towards the Harvest girls. Unaffected by their spell, the post impaled Abigail up against the wall, breaking their connection to the Ancestors.

Much of Abigail's personality remains unexplored, though following her resurrection, she seemed to have been unchanged, as opposed to Monique. Despite Davina's sacrifice significantly delayed the Harvest and her resurrection, she still treated Davina kindly and helped her with her confidence, such as when she attempted to revive a dead rose. However, she was still very loyal to the Ancestors and was willing to help sacrifice Hope in the name of the coven.

Abigail was a young teenage witch with medium-length blonde hair and blue eyes. She stood at 5'4", and her frame was slim and petite. She had an eclectic, bohemian style, and often wore casual dresses with sweaters.

Abigail possessed the standard powers and abilities of a witch and was chosen to become a Harvest witch by the Elders of the French Quarter Coven for her great potential.

Abigail had the typical weaknesses of a witch. 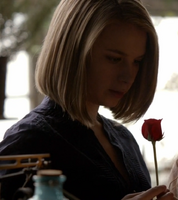 Retrieved from "https://vampirediaries.fandom.com/wiki/Abigail?oldid=2785809"
Community content is available under CC-BY-SA unless otherwise noted.