Agnes was a character who first appeared in the twentieth episode of the fourth season of The Vampire Diaries and the first episode of the first season of The Originals. She was a witch and an Elder of the French Quarter Coven. To the tourists of New Orleans, she was a simple fortune teller, however to the witches, she was powerful and experienced.

In Always and Forever, Sophie warns Elijah that he has until midnight to convince Klaus to help her take down Marcel. She threatens to kill Hayley and her unborn child if he can't convince Klaus in time. As it nears midnight, Agnes worriedly asks Sophie what she plans to do if Elijah is unable to fulfill their demands. When Elijah finally does arrive, with Sophie's sister's body as a gesture of good faith in exchange for more time, Agnes rudely informs him that his time is up, though the other witches eventually encourage her to stand down.

In Tangled Up In Blue, Agnes tells Sophie that she has made a huge mistake by making this deal with the Originals, after Katie is killed by Klaus. Sophie fights back by reminding her that she isn't doing anything to help the witches, and leaves in a hurry. After Sophie leaves, Agnes urges Sabine to reveal the premonition she had while watching over Hayley to the rest of the coven.

In Girl in New Orleans, Agnes, who is spooked by the vision Sabine had about how dangerous Hayley and Klaus' future child will be, tricks Hayley into going to an OB/GYN in the Bayou who supposedly treats werewolves. It can be assumed that Agnes and some of the other witches in their coven were conspiring to kill the fetus without Sophie's consent.

In Sinners and Saints, it is revealed that Agnes was responsible for placing the Hex on Sean as punishment for his uncle for refusing the Harvest ritual.

In Fruit of the Poisoned Tree, she had Sophie abducted then hexed her using a dark object called the Needle of Sorrows to utilize her link to Hayley to raise her body temperature in order to force her to miscarry. Agnes went into hiding afterward and was found by Klaus with the help of New Orleans' human faction. Elijah then killed her for daring to harm his family.

Agnes was a highly zealous woman who wished to destroy Klaus' unborn child. She would often refer to the child as a "devil child", disregarding the fact that Sabine's visions were always open to interpretation, willing to kill an innocent child, based on what she may become in the future, She was extremely immoral, as shown when she hexed Sean to slaughter a whole congregation and then himself. She showed no remorse or guilt over this action, displaying a psychopathic demeanor.

Her loyalties stood with mostly the New Orleans witches, but it can be argued that her loyalties were only to herself being she betrayed a fellow coven witch to further her own goals.

She had a slim build and somewhat tall stature, and was usually seen wearing bohemian like dresses and round earrings. She had curly, brown hair that she usually had in a head wrap over her forehead and brown eyes.

Agnes possessed all the standard powers and abilities of a witch. Since she was an Elder of the French Quarter Coven, she was presumably a powerful witch.

Agnes had the typical weaknesses of a witch.

Agnes in TO 1x01 Always and Forever 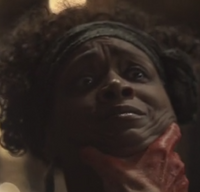 Retrieved from "https://vampirediaries.fandom.com/wiki/Agnes?oldid=2779636"
Community content is available under CC-BY-SA unless otherwise noted.