Aimee Bradley was a recurring character who first appeared in the third episode of the second season of The Vampire Diaries. She was a good friend of Sarah's and was romantically interested in Matt Donovan. She was killed by Katherine at the Masquerade Ball.

Nothing is known about her early life.

Aimee expressed her interest in Matt at Tyler's Party, but left when Caroline got jealous and compelled her to go flirt with somebody else. Later in the night, Aimee and Tyler went to the old Lockwood estate and made out but Aimee admitted she liked Matt and left. At the Mystic Grill, she started speaking to Matt again, but was forced to leave again when Caroline told her to back off.

Later at the Grill, Aimee was hanging out with her friend Sarah who displayed interests in Jeremy Gilbert. Aimee warned Sarah against it. She, Sarah and Jeremy accepted Tyler's invitation to hang out at his house. They partied, drank and had fun, but when Tyler showed them the moonstone, the girls decided to mess around and take it from him, but when Tyler struggled with Sarah to get the moonstone back, he accidentally threw her down the stairs. Aimee and Jeremy panicked, but Sarah turned out okay.

At the Masquerade Ball, Aimee once again partied with Sarah, Tyler, and this time Matt. Aimee found Stefan and Katherine who she thought was Elena. Aimee complimented "Elena's" dress, and Katherine offered to fix Aimee's necklace. However, Katherine used Aimee to make her point to Stefan and paralyzed Aimee from behind, and then killed her by breaking her spine, leaving Aimee's body in Stefan's arms.

Damon later hid the body. In the next episode, missing poster signs of her are seen plastered around school. Her body has never been found.

Not much was known about Aimee's personality. However, there were times when she was a flirt. Aimee also tended to like partying and had a playful nature. Aimee also had a crush on Matt and tended to show evidence of her flirty behavior with him.

She is an attractive young woman with curly, dark brown hair and brown eyes. She has an athletic build and a short stature, and wearing a various selection of clothing. 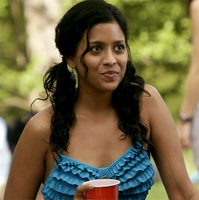 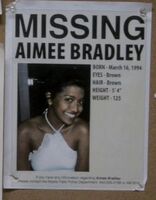 Retrieved from "https://vampirediaries.fandom.com/wiki/Aimee_Bradley?oldid=2779637"
Community content is available under CC-BY-SA unless otherwise noted.