Dated, Sexual, Loved each other; Close Bond, Former Allies; They were protective of each other, Alaric kept the secret of vampires away from Jenna to try and keep her safe, Alaric still loves her and still mourns her death.

This is the romantic relationship between the vampire Jenna Sommers and the human Alaric Saltzman.

They started dating during the first season of The Vampire Diaries and they remained together for most of Season 2 but broke up because of Alaric's dishonesty. After Jenna found out the truth, they reconcile briefly before Jenna is turned into a vampire by Klaus, then killed in his sacrifice ritual. Alaric currently mourns her loss years later.

Jenna met Alaric through her nephew Jeremy Gilbert. Alaric was Jeremy's history teacher. She was interested, even though she swore to herself against men because of her ex, Logan Fell. Nevertheless, she found Alaric to be sweet, even though he had a habit of talking about his thought-to-be deceased wife, Isobel Saltzman.

He came across Jenna's ex, Logan Fell, a newly turned vampire who was still in love with Jenna. After Logan harassed Jenna at a high school career fair, he realized he was a vampire. Later that evening, Alaric staked and killed him, revealing himself to be a vampire hunter.

At the 50s Decade Dance, she met Alaric again and he walked her home, almost talking about Isobel all the way. She understood that he needed to let out how he felt and told him to feel free about talking about her. While researching Elena Gilbert's biological mother, she found a picture of Isobel Flemming in high school. She showed Alaric, who realized his wife was Elena's birth mother. He was shocked that Isobel never told him, and this revelation caused Alaric to become distant with her for a short amount of time as he processed this new information.

At the Founders' Day Fundraiser and Bachelor Raffle, Jenna apologized for dropping the bombshell on him. He accepted her apology but told her he wasn't ready to talk about Isobel to Elena. They later went together to the Miss Mystic Falls Pageant, and watched as Elena and Caroline competed for the crown.

Jenna was pleased that Alaric was spending time with Elena so she could know more about her biological mother Isobel Saltzman. Alaric tried to apologize for not being around, but Jenna told him not to. Alaric came back from Duke University earlier that Jenna expected and swept her up in his arms with a passionate kiss, telling her that's what he should have done earlier.

Damon had Alaric talk to Jenna and have her throw a barbecue so Mason, a werewolf would turn up and he could try to get some new information out of him. Jenna and Alaric enjoyed themselves at the barbecue. Later it is revealed that Katherine had stopped Jenna from taking vervain perfume and compelled her to stab herself in front of Alaric and Elena. He cared for her while she recovered.

In The Sacrifice, their relationship seems to be very advanced as noted when Elena accidentally caught Alaric in his boxers and Jenna with Alaric's shirt on in the middle of the night as they were heading back to bed from the kitchen. Alaric offers Elena chunky monkey ice cream, and then leaves quickly afterward, feeling awkward about being in his underwear in front of her. After Alaric leaves, Jenna apologizes to Elena for waking her up and for having him sleep over all the time, but Elena says it is ok and she is happy for them.

Their relationship becomes strained after the return of John Gilbert, who plants questions in Jenna's mind about Alaric's "dead" wife and whether she was getting the full truth from Alaric. Elijah appears to use her to get to Elena and spends a lot of time around Jenna, causing Alaric to become jealous.

They break up when Jenna realizes that Alaric is keeping secrets from her. In The House Guest, Alaric tells Jenna that Isobel is dead and that there are many things about her death that he can't tell her because he doesn't know them himself. He then told her that whether she believed him or not, he loved her and that he didn't want to hurt her.

That night Isobel appeared at Jenna's doorstep introducing herself as Elena's mother. Angry and confused that both Alaric and Elena had lied to her, Jenna took off to stay at campus for a while. A few days later she returned to talk with Alaric (who by then was possessed by Klaus) and witnessed his fight with Stefan and learned that he was a vampire.

Jenna stayed at the Salvatore Boarding House, which had recently been signed over to Elena to act as a safe house, to feel protected after she learned everything about vampires from Elena. After Klaus finally leaves Alaric's body, he sends Alaric to the Boarding House to tell Elena the ritual will happen that night. Jenna held a cross bow at him as she believed him to be Klaus, until Alaric told her about a night they spent together, convincing Jenna it was Alaric, as only he would know that story. She told him she understood why he lied to her, and she forgave him before kissing him. After Damon rescues Caroline from being used as the vampire sacrifice, Klaus tells Katherine to pretend to be Elena and lure Jenna out of the house. When Jenna steps outside, Klaus feeds Jenna his blood and kills her, turning her into a vampire to be used in place of Caroline. He then stakes Jenna in front of Elena, killing Jenna for good and devastating Elena.

Alaric desperately tried to rescue Jenna from being used as the sacrifice but there was nothing he could've done. He was heartbroken when Damon told him Jenna was dead and is seen laying a rose on her grave at her funeral. He goes on a drinking binge after that to help him deal with his grief and sadness over her death, and has a very difficult time dealing with it until he finally moves back into the Gilbert's house and takes Jenna's place as Elena and Jeremy's legal guardian.

Jenna: "I can't believe it. Elena is my sister's husband's brother's daughter and her mother is my boyfriend's deceased wife. You can't make this stuff up."
Alaric: "It's definitely a little overwhelming."
Jenna: "I can't believe they kept it a secret. How is it possible to keep a secret like that
-- Daddy Issues

Alaric: "Where did John disappear to?"
Jenna: "Maybe the same place the rest of the dinner party ran off to."
Alaric: "Look, Jenna, I'm, uh... I'm so sorry tonight was..."
Jenna: "What happened to Isobel?"
Alaric: "You know, John should have never brought that up."
Jenna: "That's not an answer."
Alaric: "He's just trying to stir up trouble."
Jenna: "That's not an answer, either."
Alaric: "I can't talk about this, Jenna."
Jenna: "I keep thinking that maybe it's me. Maybe I'm reading into things. I should trust you. That's what a relationship is about, right? But then I think that maybe John is right and maybe you're not being honest with me. So... are you being honest?"
(He doesn't answer. She cries)
Jenna: "Right, ok. ...that was an answer."
(She leaves)
-- The Dinner Party

Alaric: "Jenna."
Jenna: "Not tonight, Ric. Tonight I have traded you for señor tequila."
Alaric: "Yeah. Well, señor tequila's not going to be treating you very well."
Jenna: "Well, the two of you have a lot in common."
Alaric: "Look, Jenna, I hate that you're this upset with me."
Jenna: "Yeah, well, it's your fault. Because whatever it is you're keeping from me, whatever you think I can't handle… You're wrong. 'Cause last year I was a grad student who smoked a lot of pot and couldn't keep a goldfish alive. And now I'm a parent, so I think I can handle anything, Ric."
-- The House Guest

Alaric: "You know, I tried to protect you from all of this, but I should have known that you could handle it."
Jenna: "Can I?"
Alaric: "Well, you just did. Jenna, I know we have a lot to talk about."
Jenna: "I'm glad you're okay. I should have said that already."
"(last conversation before her death)"
-- The Last Day 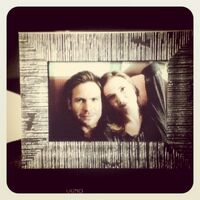 Retrieved from "https://vampirediaries.fandom.com/wiki/Alaric_and_Jenna?oldid=2766665"
Community content is available under CC-BY-SA unless otherwise noted.