Family, Alaric was Jeremy's legal guardian; Close Friends, Former Enemies (while Alaric was under his Dark Side), Allies; Alaric is a father figure to Jeremy, Alaric promised to always watch over Jeremy, Both were dead and on the Other Side together, They currently work together at the Salvatore Boarding School (Alaric is one of Jeremy's bosses being he is one of the co-heads of the school).

The family-like relationship between the Human Alaric Saltzman and Supernatural Hunter Jeremy Gilbert.

When Jeremy made his exit from Mystic Falls several seasons ago, Alaric was the only one aware that Jeremy wanted to follow his true calling: killing vampires. Alaric provided Jeremy some intel on where some vampires could possibly be and Jeremy followed that lead to start following his calling as a vampire hunter. They shared a somewhat-distant relationship being Alaric stayed in Mystic Falls, moved to Dallas, Texas, and then moved back to Mystic Falls due to supernatural events taking place in his life. However, they are currently reunited and working together as co-workers being both work at the Salvatore Boarding School.

Alaric replaces Mr. William Tanner as the new history teacher and finds Mr. Tanner's "Jackass File", which is really just a file that is about Jeremy Gilbert. After reading the file, he offers to give Jeremy a second chance by doing an extra credit history report. He also sees Jeremy as he spends some time with Jenna Sommers. 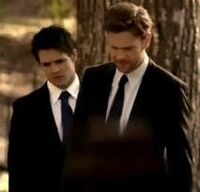 Alaric tells Jeremy more about vampires, werewolves, and shows him wolfsbane. He also gives Jeremy weapons to kill Katherine Pierce in Masquerade. In As I Lay Dying, after Sheriff Forbes tries to kill Damon, Alaric asks Jeremy to find Damon. After Jeremy is shot and killed, Alaric helps Bonnie take him to the Witch Burial Ground to revive him.

Alaric mentions that Jeremy walked in on Jenna and him hooking up, as he was trying to prove that Klaus wasn't possessing his body anymore. 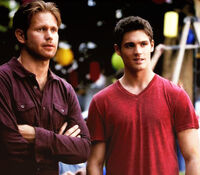 Then, in Season 3, Alaric becomes Elena and Jeremy's guardian after Jenna died. He saves Jeremy's life after Klaus compelled him to stand in front of a speeding car.

In the episode Heart of Darkness, Alaric permanently becomes their enemy as his alter-ego starts to takes over.

In Do Not Go Gentle, Alaric makes the decision not to complete his transition into becoming a vampire. He seems to believe that he deserves this after all that he has done. Despite Jeremy's unwillingness to leave him to die, Alaric says that he has to do this. He tells Jeremy he won't be alone because Damon will stay with him. Alaric then hugs Jeremy before letting him walk away.

In The Departed, after dying, Alaric appears as his old self in the Gilbert House. When asked by Jeremy what he is doing here, Alaric says that he wanted to say goodbye and it just kind of happened. He then promises Jeremy that he will always be looking over him, and that he will never be alone. This is when Jeremy realizes that Elena and Alaric have both died and that Alaric is now a ghost.

In the Graduation, Alaric and Jeremy appear to be happy as they eat their burgers with Elena.

In 500 Years of Solitude, while the veil is down, Alaric returns as a ghost and shares some moments with Jeremy and Damon.

In Home, Alaric comes back from the Other Side and reunites with Jeremy, along with the rest of his friends and allies.

In Black Hole Sun, Alaric takes Jeremy to the hospital after he shows up on his doorstep drunk. After taking advice from Jo, he trains with him in the woods to help him deal with Bonnie's death.

In Stay, Alaric drops Jeremy off to the bus station and gives him a bag of wooden stakes and weapons. It is revealed that Jeremy isn't attending art school, but is actually leaving town to hunt vampires. Alaric gives Jeremy information to look into while investigating recent attacks in Santa Fe. He tells him to be careful and that he'll be the first person to call when Bonnie returns. Alaric silently looks on as Jeremy boards the bus.

In I Was Feeling Epic, although Alaric and Jeremy do not interact in this episode, they are seen to be in touch again and are working in the Salvatore Boarding School together. Alaric is one of the heads of the school and Jeremy is currently a teacher there.