Alexandria "Alex" St. John is a character on The Vampire Diaries. She first appeared in the fourteenth episode of the seventh season. She was the leader of an organization called The Armory, which collects supernatural artifacts. She is also a distant cousin of Enzo. Alex's current status is unknown being Bonnie Bennett spelled and locked Alex inside the Armory with the darkness that lived inside it, the creature inside the vault.

Alexandria is a member of the St. John Family.

Not much is known about her history prior to the series, but she had revealed she had been looking for family most of her life while working to become the leader of the Armory.

In Moonlight on the Bayou, she captures Mary Louise and Nora Hildegard at a store as she had been tracking them through their phone. Afterwards, she is seen in a quick flashback freeing Enzo from his restraints. While in the present, he confronts her and declares he isn't going to do anything for free anymore. She then reveals to him that his family is at The Armory and his father was the founder of it. She then reveals to him her full name and that they are family.

In I Would for You, she meets Bonnie and then takes her to where the Eight Everlasting is at, explaining to her about how they gathered Rayna's lineage, victims and the shamans who gave her their lives. Bonnie makes a remark about two everlastings instead and Alex starts to get slightly angry. She talks to Enzo and she asks where Bonnie is, and he tells her he let her go, to which Alex says that they need her too.

In Days of Future Past, after Nora awakens from her sleep, Alex enters the cell and tells her about Mary Louise's current state - she's been poisoned by Rayna's blood, which is lethal to witches. However, Alex offered Nora a deal that if she brings Enzo back to The Armory, she'll find a way to cure her fiancé. After Nora returned from her journey, Alex revealed that there's no antidote to Rayna's poisonous blood and that Mary Louise has barely a week left to live.

In Somebody That I Used to Know, Alex encountered Enzo, who was hunting down vampires released from the Phoenix Stone. She asked him what was he doing in an abandoned building all alone, hoping to find out about Bonnie's current location, a question which Enzo refused to answer. Alex said that she knows about the incident between Bonnie and Virginia which occurred in the psych ward the day before and revealed that the reason why Virginia was committed to a hospital was due to her having violent episodes which led her to kill Lucy Bennett, after she sealed the sacred vault inside the Armory's basement while Alex's and Virginia's other sister, Yvette, was still inside.

In Kill 'Em All, Alex successfully has Bonnie Bennett open the vault to rescue her sister, Yvette after luring her over by using Caroline and Alaric. Alex then heartbreakingly discovers her sister's corpse and flees from inside the vault only to find that Bonnie magically trapped her and the rest of the Armory inside the building with the opened vault. Alex begs Bonnie to release her, but Bonnie leaves Alex for dead.

Alex has a calm exterior to her, but can be shown to be prone to anger as when she didn't know what was happening to the Eight Everlasting and when Bonnie was let go.

Alex has long, wavy black hair and dark brown eyes. She was mostly seen wearing a lighter shirt underneath a black jacket. 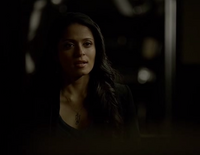 Retrieved from "https://vampirediaries.fandom.com/wiki/Alexandria_St._John?oldid=2781931"
Community content is available under CC-BY-SA unless otherwise noted.