There is nothing known about her early life.

Rose and Elena find Alice hiding shortly after reaching Slater's house. She was dating Slater, hoping that he would turn her. And when Slater was killed, she was the first to discover his body. Elena then tricks her into giving her Slater's password for his computer and access to all the information that he knows in return for Rose turning her into a vampire. Rose and Elena later used her to try and send a message to Klaus. When Damon came, he compelled her and told Rose and Elena that Alice was sleeping and that she's not going to remember a moment of this day.

She desperately wants to be a vampire. According to Rose, she only dated Slater so he would turn her. If this is true, it shows that she is willing to lie to people to get what she wants. When Elena tells her she could convince Rose to make her a vampire she immediately agrees to help them get in touch with Elijah, which shows that she is somewhat naive because she believes Elena and Rose without proof. She gets very excited when she meets Damon, which is probably because she's heard of him.

She has long, somewhat wavy black hair and hazel eyes with heavy eyeliner around them. She wore dark red-pink lipstick and a sleeveless black tank-top. She also wore a long necklace. 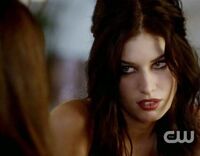