A FLIP OF THE COIN — After starting her day with a startling discovery of Damon's latest indiscretion, Elena is frustrated to find that none of her friends agree with her on how they should react to the Original family's internal power struggle. Once again caught up in the destiny of the Bennett witches, Bonnie and Abby find themselves playing a part in a ritual to appease the spirits of Nature. When Elijah gives Damon and Stefan a dangerous ultimatum that puts Elena in danger, they turn to Alaric and Meredith for help with a plan that leads them to a terrible choice.

The episode starts with Elena waking up. She calls Stefan, with whom she needs to discuss about Esther's plans and how she is against it for her remorse of the collateral damage (mostly for Elijah since he was the one that at least made an effort in saving her past season). The call is ignored by Stefan. She then calls Damon to confront him about the misunderstanding last night, for him to only ignore it as well. Damon is in fact revealed to be sleeping with Rebekah. Elena goes to the Salvatore's Boarding House to further make sure since neither of the brothers were answering her calls. She discovers Damon's discretion and is upset because of it. However, Damon persists to boast and seems nonchalant about the matter.

Rebekah returns back to the Original's manor, being teased by her brothers, mostly Kol, about her one night stand. Irritated, she sharply comes back. Kol persuades Klaus to have some quality time together in the good will of making up his act for sticking a dagger through his heart. Klaus reluctantly obliges. After they left, Elijah, whom is suspicious of his mother as he finds her used privacy spell ingredients, asks Rebekah whether Esther has been acting strange. Rebekah rebuffs Elijah reasoning Esther didn't have bad intentions as all she has been doing ever since she came back to life was rebuilding their family. Still unconvinced, Elijah decides to take matters into his own hands.

Bonnie, Caroline and Elena are trying to replicate Esther's privacy spell to no avail. Bonnie reveals that Esther has approached both her and Abby for help in performing the sacrificial ritual of the Originals. Unnerved to decline and that the fact she nor her mother had inadequate powers to go against an original witch as well as feeling guilty for having been a part of upsetting the balance of nature, Bonnie and Abby agree. Elena, who is still unwilling, feels at odds with this revelation.

Elijah visits Elena and asks her to accompany him. He brings her to the forest area correlating with the Lockwood's land, explaining his world prior to the modern change. Elena tries to compose herself. Elijah however points out he knew that she was lying the whole time. Unable to lie anymore, she confesses the truth and her guilt expressing that she'd do anything to help. Elijah, who has planned everything, grabs her and shatters the ground, trapping her in the underground cellars. Rebekah is the one last card as she is there, able to kill Elena at any moment necessary.

Damon, Stefan and Alaric notice her disappearance and inform Caroline. She allies with them and agrees to distract Klaus for the time being who is hanging with Kol at the grill. The distraction proves successful and the ritual begins. Alaric stabs Kol for forcefully hitting on Meredith, and all the Original offspring feel the pain simultaneously. Klaus gets to his senses, abandons Caroline and helps Kol, albeit injuring Alaric. This buys time for Elena to escape from Rebekah's clutches and she stumbles upon Esther's coffin in the cave where all vampires can not enter. Getting creative, Rebekah returns with a tank of gasoline and a box of matches, more than willing to end Elena. Elena however stalls her under the guise that Rebekah has always wanted to see her suffer so what would it be for her if she were to end it right in the present.

Damon and Stefan reach the old ancestral witches manor where Esther, Finn, Bonnie and Abby are at. Understanding the equation, they have to remove one of the witches. The brother's flip coins to decide who gets to take the shot. Stefan approaches Bonnie and tells her to stop. She explains she can't as she has no control over Esther channeling the Bennett bloodline. This puts the ultimatum into action. Damon feeds Abby his blood and kills her, turning her into a vampire. The originals unite, coming together to Esther and Finn who are performing the ritual, unable to stop them until the Salvatore's intervention. Esther and Finn unknowingly disappear, leaving the family in shambles despite that all the children survived. Rebekah lets Elena go, claiming that she does prefer to watch her suffer slowly as it is much more satisfying.

Elena hears the news and the price of saving her, leading her to seek Bonnie who is watching over Abby who is in transition. Caroline asks her to better leave, because even though Bonnie is alright since the goal was to save her friend, it seems that Bonnie is the one who always gets hurt. Elena decides to leave, but asks Caroline to tell Bonnie her gratitude and love.

"Elena, today I did things I abhor to protect the one thing I value most, my family. If anyone can understand it, it's you. Your compassion is a gift, Elena. Carry it with you, as I will carry my regret.

Elijah leaves Elena a letter of apology saying that his actions were to preserve the one thing that matters most to him: family. He tells Elena that her compassion is a gift and that he truly regrets what he has done. Rebekah returns home to find no one there and asks Elijah. Elijah explains that everyone fled, he expresses that Esther wasn't all wrong because she only created vampires and they were the ones who turned themselves into monsters. Even him, the most moral of them had committed actions so cruel, using an innocent as bargain. He presumes to leave as well. Stefan and Damon chat, with Stefan asking why Damon chose to be the one to kill Abby. He insists that it should be his role and that Stefan is the one who belongs with Elena. Stefan shrugs and remarks Damon is still in love with her. Likewise, Damon points out that Stefan is well on his way back to the "old Stefan", challenging him to spill when he last had human blood. Stefan confesses that the last time was when he threatened Elena over the Wickery bridge, proving his brother's point.

Rebekah approaches Klaus, and she tells him that he's the only one who hasn't left her side despite the fact that she despised him after knowing the truth about their mother's death. Klaus is seen burning his drawings of Caroline. Rebekah alerts him of the video she shot of Elena's supposedly last minutes, the walls of the Lockwood caves, the symbol, chronological legends of the originals has something she just recognized. The White Oak Tree, the one that could bring peril to them, still exists. Rebekah tells Klaus that the battle isn't over.

Back at Dr. Meredith Fells apartment, we see Alaric waking up and walking around. He finds one of the blades that belongs to Elena's family, along with files and information pertaining to the death of the medical examiner (her ex). While Alaric is seeing everything, Meredith walks in on him. She tells him that "he wasn't supposed to see that," aims a gun at him and fires.

Elijah: "I admire you, Elena. You remind me of qualities I valued long before my mother turned us. It's not in your nature to be deceitful, and yet, when I asked about your meeting with my mother the other night, you lied to my face."
Elena: "It's not true. I told you that all your mother wanted was a new start."
Elijah: "I can hear your heartbeat. It jumps when you're being dishonest with me."

Damon: "She's not gonna listen to anything I say."
Stefan: "Is it because of your little sleepover?"
Damon: "It's not my fault she decided to get jealous."

Elijah: (to Damon and Stefan) "You help us now, or Elena dies screaming in agony. The choice is yours."

Elijah: "All my talk of virtue. When it suits my needs, I kill, maim and torment. Even today, I terrorized an innocent."
Rebekah: "Elena is hardly innocent."
Elijah: "And I used your hatred of her to get what I wanted. Wielded you like I would a sword. My sister."
Rebekah: "You did it to protect us, Elijah, and rightly so. We deserve to live. We are better than they are."
Elijah: "Are we? Mother made us vampires. She didn't make us monsters. We did that to ourselves."

Damon: "I'm better at being the bad guy anyway."

Damon: "Spend 146 years with someone, you sort of start to pick up on their tells."

Klaus: "End this now, Mother, or I'll send you back to Hell."

Elena: "Are you insane?"
Rebekah: "I prefer spontaneous. That's probably why Damon likes me so much."

Stefan: "Awful lot of effort for someone who pretends not to care about her anymore."
Damon: "Pot, kettle, brother."

Klaus: "Join us for a drink."
Caroline: "I'd rather die of thirst, but thanks!"

Rebekah: "You know, I don't know what I want more, to find out we're saved or to find out it's all right to kill you."
Elena: "This isn't my fault. I wanted to get rid of Klaus. At one point, so did you. I didn't know that your mom was planning on killing all of you."
Rebekah: "Do you think I wanna spend what could be the last few hours of my life having idle chit-chat with the girl who literally stabbed me in the back? Of course not. But for some reason, everybody seems to want to bend over backwards to save your life. Which is incredibly annoying, but makes you the perfect hostage. So why don't you sit down and shut up before I ruin everything by ripping your head off."

Elena: "What are you doing here?"
Rebekah: "Not much. Unless you try to run, in which case I get to kill you."

Alaric: "I haven't seen Elena since this morning."
Damon: "Well, she's not answering her phone."
Alaric: "Well, I'm surprised you have time to call, what with all this Original sex you've been having."

Rebekah: "This house has enough men rolling around in it."
Kol: "Just like you, 'Bekah."

Elena: "I wish there was something I could do to help."
Elijah: "You know, one thing I've learned in my time on this earth? Be careful what you wish for."

Elena: "You should know that Esther's planning on killing her entire family. She's linked them all together with a spell. What happens to one, happens to all of them.
Damon: " That's great. Klaus will finally be dead. We win. Why do you look like someone just shot a panda bear?"
Elena: "Because to kill Klaus, she has to kill all of them. Including Elijah and he doesn't deserve this.
Damon: "I'm supposed to care about Elijah?"
Elena: "Shouldn't you at least care about Rebekah?"
Damon: "Two seconds ago you were pissed that she attacked you. It's a win-win. Don't do anything to screw this up, Elena."
Elena: "Why are you doing this?"
Stefan: "He's right, you know. Klaus has to die. They all do."
Damon: "See? It's democracy in action." 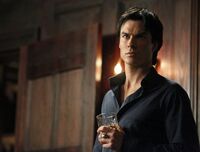 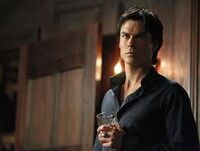 Behind the scenes - Bar scene

Retrieved from "https://vampirediaries.fandom.com/wiki/All_My_Children?oldid=2785261"
Community content is available under CC-BY-SA unless otherwise noted.