Après Moi, Le Déluge is the eleventh episode of the first season of The Originals and the series overall.

WITCH BUSINESS — When Davina becomes violently ill and the repercussions soon begin to affect the entire French Quarter, Marcel, Klaus, Elijah and Rebekah rush to find out what is going on. Sophie approaches the others with some startling information about the Harvest ritual and presents a drastic plan to save Davina. Elsewhere, Hayley is racked with guilt as she comes clean to Elijah about her role in Sophie's plan. Last, a sequence of unforeseen events sends shockwaves through the French Quarter.

{{Hide/Show|content = Davina grows seriously ill, putting the entire city in peril. Hayley and Elijah are at an impasse. Sophie's plan hits a snag, and she receives help from an unexpected source. Marcel mourns the loss of someone close. And amidst chaos, Klaus is surprisingly affable.

Teenage tantrums reach a whole new level when the teen in question is one heartbroken, rebellious, all-powerful, hormonal female witch. Davina may be tucked snugly back into the compound, but she's making quite the spectacle about how unhappy she is to be there. In addition to throwing things, she's tossing Marcel around like an old teddy bear. He's trying to soothe her, but she can't understand how he can be "friends" with Klaus, especially after the Original killed her first crush, Tim.

Her sketches of Celeste have Elijah out of sorts as well. He can't figure out why she would call his ex evil. Elijah thinks Davina may be mistaking power for evil since, in her day (200 years ago to be exact), Celeste was quite powerful. While Marcel promises that Klaus will pay one way or another and that all he wants is to make peace with her, her response is the shattering of more bric-a-brac against the wall. As Klaus barges in, probably to try and broker peace and quiet more than actual harmony, Davina doubles over and begins to cough up dirt. The entire house begins to shake, and there's no doubt that whatever has taken hold of Davina is affecting her surroundings as well. Sweaty and out of sorts, Davina gets a visit from Rebekah. The two have aligned and it's the Original sister who has instructed Davina to be a pain in the a**. I'm guessing she didn't need much prodding. Rebekah tells her to dial it back a bit, but the young witch says she didn't do it on purpose. Car alarms in the background suggest that Davina's episode created havoc all over the French Quarter.

It's not surprising the men of the house are scratching their heads wondering how to solve a problem like Davina. Klaus questions how Marcel kept her in line, and Marcel says he never had to, but then again, he never killed someone she cared about. Klaus is finding out he got more than he bargained for since Davina isn't currently serving a purpose that benefits him. Elijah is convinced she's crumbling underneath the weight of her power but doesn't understand why her lack of discipline regarding her power is manifesting in such an aggressive way.

With Elijah on his way to see Sophie, Hayley decides to come clean and tell him about her deal with Sophie and how she invaded his privacy by looking through his journals to locate Celeste's body. Even misty eyes and a quivering lip does little to soften Elijah. He informs Hayley that Celeste did not want her remains consecrated and made him promise to bury her where she could never be found. He says that not only did she betray him, but she is responsible for breaking a promise he made to Celeste so long ago. Hey, genius, maybe if something is supposed to be so top secret, you don't write it down.

Sophie reveals her plan to become an elder to Sabine. Sabine says that you can't just declare yourself one, the title has to be bestowed upon you by other elders, of which there are currently none. Sophie cites a massacre that occurred in the early 18th century that wiped out all the elders. The remaining members of the coven decided that whoever consecrated the most powerful dead witch in the community became an elder. Sophie dumps Celeste's bones out of her backpack, and even Sabine comments that Sophie's actions are disrespectful. But time is running out before the harvest, so anything goes.

Elijah overhears Sophie's plan and brings her back to the compound. He questions her as to why Davina is drawing pictures of the woman whose bones Sophie stole. She hasn't got a clue. Davina has another episode, and after hearing about some of the girl's other symptoms, she tells Elijah, Klaus and Rebekah that they have to complete the harvest ritual now. The disturbances they've experienced up until now are nothing compared to what lies ahead. The brothers are distrustful, but Sophie explains that Davina was never meant to hold all that power and that, in addition to destroying her, she'll take a large portion of the population of New Orleans with her. Davina's self-destruction will be broken down into four stages that represent the elements of the harvest: earth, wind, water and fire. Each stage is worse than the last. Rebekah has been tasked with explaining all of this to Davina and breaking the news that the only cure is to complete the harvest. She reassures the girl she'll be resurrected. Davina's convinced that everybody is lying to her. Also not convinced are Marcel and Elijah. The second stage begins, but Rebekah is able to delay any further destruction by giving Davina a sedative. The gusts appear to sway Elijah that what Sophie is saying is true. Marcel is the last hold-out; he does not want Davina to be sacrificed. Elijah explains that, either way, she's going to die and if the once cynical Sophie believes in the process, he too is now a believer. And Elijah has always been clear that he wants no harm to come to Davina. Klaus isn't thrilled because the witches are going to regain their power, and he's losing his weapon against them. Klaus' primary concern is the city. After all, what good is a king without a kingdom?. As Sophie prepares for what lies ahead, Rebekah chatters in her ear continuing her secret campaign to amass a small but effective alliance against Marcel and Klaus.

Haunted by the memories of what he witnessed during the aborted harvest, Marcel disobeys Klaus and takes Davina from the house and, in his mind, out of harm's way. Sabine tries a locator spell, but Davina's condition makes it impossible to pinpoint her location. Elijah, always unflappable, exerts a calming influence on Sabine, and she's eventually able to determine Davina is somewhere near the river. When Davina first awakens, she's not exactly oozing gratitude towards Marcel. She tosses him around again, but he pleads his case. He tells her about the protection spell he put on her that saved her life and swears that if he knew Klaus' plans for Tim, he would have stopped it. He even admits that he let his guardianship over her go to his head. He swears he will keep her alive, and the two are besties once again.

Sophie's plan isn't coming together as she had hoped. The spell to absorb Celeste's power isn't working. It's possible someone has already taken it. They need a super powerful dead witch's bones fast. Not something you can get at the local Piggly Wiggly. Elijah knows just where to get his hands on one—his mother, who is being kept in her coffin in the basement. The whole thing is very reminiscent of Psycho. At least Klaus doesn't dress up like a woman or prop the old gal up in a rocking chair. A bunch of details are quickly and conveniently squared away. Rebekah points out how much power they are handing over to the witches by offering up their mother, but Elijah makes it clear that they don't have much choice. Secretly, things couldn't be working out any better for Beks. If she has been successful in going all girl power with the witches, this development definitely works in her favor.

The only thing standing in the way of this mini-apocalypse is Davina. Rebekah calls on frenemy and piece of architecture Thierry for Intel on where Marcel would take the girl to hide. Rebekah tracks them down in time to watch Davina vomit up a non-stop stream of water. Rebekah uses her powers of diplomacy, and Marcel is officially getting freaked out to convince him that he's not breaking his promise to protect her if he hands her over to Sophie. Everybody has time to find umbrellas and consecrate their mother's bones. Davina absolves Marcel, realizing her fate. All the key players are finally in place, and Sophie slits Davina's throat. New Orleans is saved as the magic passes out of Davina as it was supposed to. Her body is placed with the other girls, and Sophie starts to perform the reaping. She pleads for the spirits of the elders to resurrect the chosen ones, but to no avail. What she had feared from the beginning has come to pass.

This triggers a nasty blow-up from Marcel directed at Klaus. He holds him accountable for Davina and isn't interested in hearing Klaus spew propaganda about their community of vampires. Klaus embraces his old friend and comforts him, a very un-Klaus-like move. Hayley apologizes to Elijah, but he continues to fight his feelings for her and this incident has given him an excuse.

Klaus questions Rebekah about her resources in finding Marcel, and Rebekah tells him he's not the only one with spies.

Rebekah wonders where all the power that was in Davina went, as four girls were supposed to rise from the dead but none did.

Bastianna, one of the Elders, is shown alive, as Sabine (possessed by Celeste) brings her and three other powerful witches up from the dead. She reveals she has had to endure people calling her "Sabine" for almost a year.

Elijah: "The Italians call them strega. The Yoruba of West Africa call them aje, meaning mother. Where my mother was from, they called them häxa, and here we call them witch. Over the centuries, vampires have fought them and fought beside them, bedded them and burned them. Whether adversary or ally, they have been a force to be reckoned with. Their ancestral magic anchors this city. There's never been one all-powerful witch until Davina."

(noise in the background)
Klaus: "Well, that's going well."
Elijah: "If you were trying to win the girl's trust, perhaps poisoning her one true love was not the most splendid idea?"
Klaus: "Well, are there any more inopportune deaths you'd like to wave in my face?"
Elijah: "Give me a month. I'll get you a list."
(noise in the background)
Klaus: (sighs) "Young, old, dead, or alive, witches are a pain in the ass."
(Klaus leaves)

Davina: "Go away!"
Marcel: "You gotta be starving. You haven't eaten since..."
Davina: "Since your best friend killed my best friend."
Marcel: "Davina, I'm sorry about what happened to this kid, Tim."
Davina: "I'm sorry you don't hate Klaus for what he did."

Sophie: (about Davina) "One person was never meant to hold that much power. It's tearing her apart and it will take us down with it."

"Hard To Find" – The National 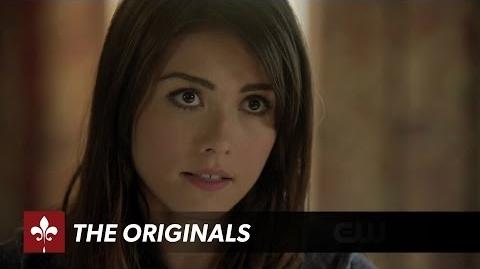 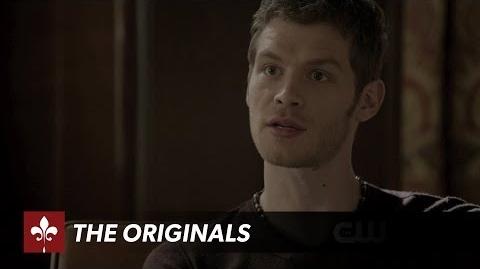 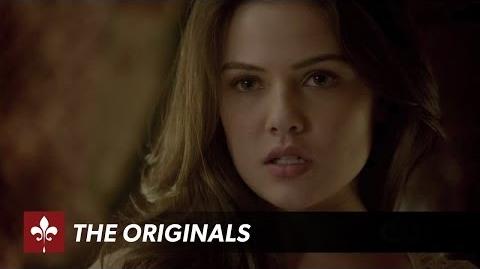 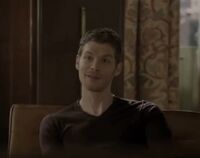 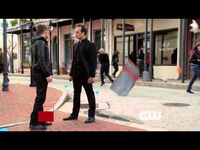