Beatrice Bennett was a a character who first appeared in the twelfth episode of the eighth season of The Vampire Diaries. She was a very powerful witch who lived during the 18th century and was a member of the Bennett Coven and Family.

In the 1690s, Beatrice's family migrated from Salem to Virginia to avoid the persecution of the witch trials. In the new area, her family and others built a new community and grew their coven.

Sometime in the mid 18th century, she was born to the current coven leader and grew up learning about magic. As a young adult, she met Ethan Maxwell, with whom she shared a close bond.

In What Are You?, Matt Donovan tells of her story as he, psychically, relives his ancestor's life in 1790, during the creation of the Maxwell bell through a series of flashbacks.

She tells Ethan that her mother, and coven leader, is pleased to know of the completion of the bell with the hopes of driving out the "depraved beasts" from their community. Unknown to Beatrice, Ethan is sirened to corrupt the bell's magic with the Staff of Arcadius and to use it against the witches. Unable to speak to Beatrice about what he must do, he writes her a letter for her to decode. She manages to do so as the bell is being rung. Gathered together, she and her coven use their collective magic to save the community from the unleashed hellfire, though her coven is destroyed in the process. She is the only one present from her coven to survive.

She devises a plan and, with Ethan, sets out to entrap the sirens. They lure the sisters through the underground tunnels to the Armory's vault, where she uses her magic and traps them. Angered, they siren Ethan to kill Beatrice since she will not free them or their master, Arcadius, though she protects herself with a Motus spell, seemingly, locking him inside the secret room. Unable to remove the siren's control, she leaves them all behind and her bloodline is continued through her.

In I Was Feeling Epic, Beatrice appears alongside Bonnie and Sheila Bennett, as she fought back Hellfire, taking Bonnie's hand as she chanted with her descendants. Moments pass and other Bennett witches across time unite all around them, casting their spell in unison to prevent the destruction of Mystic Falls. Together, with a final push of their magic, they succeeded in repelling Hellfire back to Hell, destroying the dimension, sparing Mystic Fall, and saving Bonnie. With the task completed, she disappears, returning to peace.

Presumably born in the area that would become Mystic Falls, Beatrice was a level-headed and strong-willed sorceress that cared deeply for her family, friends, and community. She also seemed to have harbored a bit of jealousy towards Ethan's involvement with Sybil (who, unbeknownst to her that she was one of the "vile, faceless monsters") and expressed anger when he told her that he could not say what Sybil wanted.

Even with the death of her coven and family, she persevered and did what was right by the community: trapping the sirens and preventing Arcadius from being freed. Her strong will allowed her to make tough choices, such as pushing away a sirened Ethan, when he was forced to attempt to kill her, to protect herself.

Beatrice possessed all the standard powers and abilities of a witch.

Descended from a powerful bloodline of witches, as well as having been raised in a strong witch community, Beatrice was well-established in the magical arts. She was shown to possess a high resistance to pain which enabled her to cast potent spells despite being in agony. Along with her coven, they imbued the Mystical Falls Founders bell with enough magical power to make it indestructible as well as to drive out the sirens as well as preventing the blast of hellfire with the final ring of the Maxwell bell when it was subsequently corrupted.

Her quick mind enabled her to develop new spells one of which she concocted a unique plan to trap the siren sisters within the caves that would later be known as the Armory's vault. Last but not least, she returned from Peace to help Bonnie contain and drive back the hellfire attack, that would have destroyed Mystic Falls, redirecting it to hell.

Beatrice had the typical weaknesses of a witch.

(To Ethan): "Hmm. My mother was glad to receive your letter announcing the bell's completion. But not as glad as I was to decipher the information you had so cleverly hidden within. Your courage will save us all."

(To Ethan): "By this time tomorrow, the ringing of your bell will drive those depraved beasts from our lands."

(To Ethan): "No! We cannot allow the devil to walk the Earth. Motus!" 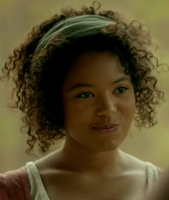 Retrieved from "https://vampirediaries.fandom.com/wiki/Beatrice_Bennett?oldid=2783145"
Community content is available under CC-BY-SA unless otherwise noted.