A DAY WITHOUT A VAMPIRE — Klaus acts on his intentions to leave town with Elena, but finds resistance from a surprising new enemy. Bonnie calls Abby to help her with a difficult spell. As events spiral out of control, Elena is determined to protect Caroline. Damon and Stefan enlist Klaus' help, while Bonnie and Jeremy take a terrifying risk to make sure her spell is effective. Damon and Stefan have a surprisingly candid conversation about the Future.

Caroline and Rebekah bond briefly while cleaning up from the decade dance, until they run into Vampire Alaric. Driving the White Oak Stake through his heart has no effect, so they both make a run for the exit. Alaric catches Caroline, snaps her neck and drags her back into the school. Stefan checks in on Elena and Jeremy at home, where they are already repainting Alaric's bedroom, needing to move on. This visit is interrupted by Damon, who bears a bite-marked Bonnie. Rebekah begs Klaus to leave town with her, but he refuses to leave Elena behind. Rebekah leaves in a huff. Bonnie claims that a witch can't make an immortal creature, and there will be a way to undo the spell Esther cast on Alaric. Elena is disturbed to get a phone call from Alaric demanding she come to the school or he will kill Caroline. Klaus arrives at the Gilbert house, looking for Elena, but Stefan and Damon stop him at the door. Elena, of course, is already gone by then. Elena finds Caroline and Alaric. In a disturbing move, he has pinned Caroline to a desk by driving pencils through both of her hands. Alaric demands that Klaus turn himself in or he will kill both Caroline and Elena. They are all going to have to work together against this new common enemy. Bonnie is sure she can use a spell to bind Alaric the way Abby bound Mikael, but it will require all of their power combined. Alaric takes pleasure in torturing Caroline, gagging her with a vervain-laced rag that forces the poison into her system. He taunts Elena, saying she wanted to learn to kill vampires, and here's a vampire to kill.

Abby arrives, and points out the usual "the spell is too dangerous" warning before folding and telling Bonnie the directions. The spell would stop Alaric's heart and Abby says in order to perform it, Bonnie has to also stop a human's heart. Jeremy volunteers since he has the Gilbert Ring to bring him back. Klaus, Damon and Stefan all drink Bonnie's blood, which joins them together. One of them needs to make blood contact with Alaric's heart, and when Bonnie stops Jeremy's heart, it will also channel through her blood and stop Alaric's. Except spells never go off without a hitch. Elena throws the vervain in Alaric's face and frees Caroline, who runs into Klaus as she leaves. Klaus promises to save Elena and tells Caroline to go home and stay safe. Bonnie begins the spell, but Klaus loses contact with Alaric, breaking the connection. Elena realizes that Esther used her blood in the creation of Vampire Alaric to tie him to her human life – when she dies, he dies too, guaranteeing that he won't be immortal. She tests her theory by slicing her own neck. Alaric cries for her to stop, and in this moment of distraction, Klaus and Elena vanish. Elena wakes up at Klaus' house, where he is collecting all of her blood in bags. He plans to bleed her out until she dies, which would take care of Alaric as well. Tyler sees her there, as he's still pretending to be sired. Alaric wakes up Stefan and Damon and fills them in on the latest, sending them to save Elena. Tyler returns to Elena, who has been left alone, and starts to untie her. This is clearly a trap, and Klaus shows up to prove it right.

As Tyler and Klaus struggle, Elena hits her head on the floor. Stefan and Damon arrive, and Stefan slows Klaus' heart as Bonnie finishes her spell. Jeremy's heart stops, but he comes back to life after Bonnie says something in Latin and then repeatedly slaps his chest. She was really wailing on him, too. Soon it will be sundown and Alaric will be out stalking vampires. So Stefan and Damon plan to leave town for the night and drop Klaus' body somewhere remote. Elena apologizes to the brothers for stringing them both along, but choosing one would mean losing the other, and she doesn't want to lose anyone else. She finds a surprise in her own kitchen – a victory gathering of her friends celebrating Klaus' defeat. Meanwhile, across town, Alaric has called a Council meeting and outs the children of Carol Lockwood and Sheriff Forbes as supernaturals. The other council members are all a-murmur. Stefan and Damon agree that whichever brother Elena doesn't choose will leave town until she dies. Alone in Alaric's old room, Elena suddenly falls to the ground, bleeding from her nose.

Alaric: (to Elena) "You don't even deserve to live."
Damon: (to Stefan and Klaus) "I'll take those odds."
Rebekah (to Klaus): "He's strong Nik! He's too strong! We need to leave! Now!"
Rebekah: (to Alaric) "You're supposed to be dead!"
Alaric: (to Rebekah) "I am."
Jeremy: (to Klaus) "What the hell do you want?"
Klaus: (to Damon and Stefan) "I'm leaving town. Just need to pick up a few road trip necessities: spare tire, flashlight, doppelgänger."
Damon: "Can't help you there."
Damon: (to Stefan) "We have a problem." 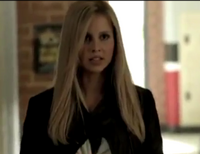 "You're supposed to be dead"

Retrieved from "https://vampirediaries.fandom.com/wiki/Before_Sunset?oldid=2787411"
Community content is available under CC-BY-SA unless otherwise noted.