DAMON AND STEFAN COME FACE-TO-FACE WITH JULIAN — After being reunited with her former love Julian, Lily hosts a dinner party to introduce him to Damon and Stefan and to declare peace between her family of Heretics and the residents of Mystic Falls. Damon and Stefan find themselves at an impasse when they realize they have differing views on how to handle Julian's arrival. At the party, Bonnie and Matt uncover a strange mystery involving some unsuspecting residents, while a devastating revelation causes Alaric to reach his breaking point. Caroline and Enzo also appear.

Flashforward: 3 years from now on, Damon arrives at Rick's home to talk about his twins. While they are in deep conversation, Caroline, who is now a production manager at a news channel and engaged to Alaric, appears on television bloodied announcing there is a message for Stefan Salvatore.

In the present, Stefan is dreaming about taking a kid named Jacob hunting and losing him. This seems very much like a flashback, and it could be a memory, but Stefan losing a son he never had feels way too much like a metaphoric dream. We don't get to see the end of the dream/memory, though, because Caroline wakes him up. She wants to know why he's sleeping on the couch, but Valerie in a towel soon solves that mystery.

Caroline doesn't even know about the child Stefan and Valerie created, but she's ready for this here-bitch to be gone. She offers to drive Stefan's first lover to the airport, but Valerie says she has to get rid of Julian before she can go anywhere. See, turns out being locked in the Phoenix Stone turns people mad, and Julian has been in there for more than 100 years. She doesn't want to stick around and see how he retaliates to her setting him on fire.

He's not mad at the moment; he's just fighting with Beau in the house. Lily tells them to stop it because they have to get the Boarding House ready for a peace party. She's inviting the whole town, which means Stefan, Damon, Bonnie, Matt, and Enzo. But that wouldn't be a real peace party, so Lily compels a few locals from nearby towns to liven up the shindig. Damon doesn't want to go. He wants Lily to enjoy her life with Julian — for exactly six months, when maximum happiness has set in, so then he can kill Julian and really hurt his mother. Lily's other loving son wants to kill her boyfriend tonight. What a family.

Damon decides to attend the party simply to stop his brother from killing Julian so that he can kill him himself six months later. (This is getting complicated.) Also, he missed his stash of bourbon. Damon prods Stefan repeatedly throughout the party to explain why he needs Julian dead so quickly, but he never gives the full answer… He keeps saying it's not his secret to tell. Stefan doesn't want to deal with battling his brother, so he enlists the help of the one and only Matt Donovan.

Matt takes out Damon with his own bourbon: He vervains it and then vervains him even more with a syringe to the neck. With Damon out of the way, Stefan goes to the kitchen to stab Julian and throw him in the fire. But when Lily comes in and saves him, Stefan loses his nerve. Damon comes to just in time to get the fallout from the attempted murder on Julian: The crazy vamp says how in the Phoenix Stone he dreamed every day that he killed Lily. And then he attacks her sons in real life because they don't respect her… or something like that. She tries to stop him, but he almost ends up staking her in the process.

Back at the Lockwood mansion,Stefan finally tells Damon why he's so eager for Julian to die posthaste: He killed his unborn son. Like any good brother would, Damon agrees to help Stefan kill Julian now, and abandon the six-months-from-now plan.

The person inside Jo's body remembers her name is Florence. She's learned how to use WebMD, so she knows she has amnesia, but luckily for her, when she starts bleeding from the nose and dying, she doesn't have the energy to check the website anymore. (WebMD is a truly scary place. You go to look up how to relieve a cough naturally and end up thinking you have lung cancer…or maybe that's just me?)

Valerie is with Caroline, and she quickly identifies the problem: The vampire soul from the Phoenix Stone is not merging with Jo's human body. The never-tactful Valerie says so callously that Jo is dying that Caroline pulls her away and yells at her. She informs her that Ric lost Jo and their unborn twins when Kai killed them on their wedding day. Obviously, this hits Valerie harder than Caroline knows.

As Florence/Jo is dying, she spends her last moments allowing Ric to say goodbye. He says how nice it was to hear his wife's voice again. And she says, "I'm sorry I'm not her. I wish I was. She was a lucky woman." And she dies. I'm not crying, YOU'RE crying.

It's a beautifully tragic moment, so obviously Valerie uses this time to watch Ric's wedding video, post-explosion. Caroline thinks she's just being a dick, but Valerie tells them she needed it to prove her theory: That Geminis have a way of saving the next generation. In Jo's death, the twins were actually protected and placed in someone else. There's a lot of witch mumbo-jumbo here that I don't fully understand, but basically with a drop of Ric's blood and a map, Valerie can tell where the twins are now. Wherever the blood ignites on the map is where the twins are…

The blood travels all over the world, starting in Indonesia, across Africa, across the Southern U.S. (the general area of Mystic Falls), across America, all the way across the map, onto the floor, where Caroline tries to clean it up and it ignites. Caroline says the spell didn't work, but Valerie says what we're all thinking, "They're inside of you.".

Bonnie and Enzo fake date and "fake" flirt at the party to make Lily jealous — I think we just saw where their future romance started. And a standing ovation for Bonnie getting a love interest, am I right?

Nora teaches Julian how to play Candy Crush, a truly useful skill in 2015. Julian asks Beau to find something of his from Oscar's car. Enzo overhears it, but we don't know what it is yet.

Valerie lets slip that Stefan didn't tell Caroline a big secret, which means it's only a matter of time until she finds out about the baby…and likely very soon because Caroline doesn't like to let secrets lie.

Julian helps Mary Louise get her mojo back. Who knew feeding from the help could be so invigorating?

One of the "guests" leaving the party asks Bonnie three times where the high school is, so she and Matt follow him. They find a room full of people hooked to IVs.

Damon (to Stefan): "Looks like mom raised her man crush from the dead."

Lily (to Julian): "We have enemies here."

Stefan (to Damon): "You need to help me kill him."

Damon (to Stefan): "Looks like mom raised her man crush from the dead."

Lily (to Julian): "We have enemies here."

Stefan (to Damon): "You need to help me kill him."

Bonnie: "Lily Salvatore's having some party."

Stefan: "I plan on killing the bastard tonight."
Damon: "I'm in."

Caroline: "Silly. What are you doing down here?"
Valerie: "That would be my fault. I...I just..wanted to let you know that I used the last of the shampoo."
Caroline: "Valerie! I didn't...know that you were staying here."
Stefan: "Stayed. Past tense. Um..Just one night."
Valerie: "I should go...put some clothes on."
Caroline: "Yeah you do that."
Valerie: "Alright."
Caroline: "Okay." (to Stefan): "Explain!"
Stefan: "Okay. Lily wants to raise Julian from the dead. Valerie tired to scorch his body before she could get her hands on him and that did not work out so well."
Caroline: "Now following how...that's our problem."
Stefan: "Okay. If and when Lily welcomes Julian back into his body, he will find out what Valerie did and he'll come after her."
Caroline: "Yeah just not connecting those dots."
Stefan: "Well maybe you can just trust me that I know what I'm doing."

Bonnie: "Oh. Do you what animal they're serving for dinner for their plus one?"
Enzo: "Hilarious. I was invited."
Bonnie: "You're scooping the competition."
Enzo: "No competition to scoop."

Enzo: "Since you're here, if anyone was wondering, you're my date."
Bonnie: "Sorry?"
Lily: "Lorenzo. I'm so glad you came."
Enzo: "Wouldn't miss it."
Lily: "Bonnie I know that we've had a rocky past but I hope this means that you're willing to start fresh."
Bonnie: "You're the reason I'm never gonna see my best friend again so...I hope you're joking."

Lily (to Beau and Julian): "Gentlemen. The back yard's not big enough."

Lily: "I have another idea."
Julian: "And I like it already."

Damon: "Julian makes her happy Stefan. More time they spend together, the happier she gets, the more tragic it'll be in six months when I hand deliver his heart to her."
Stefan: "That might be a bit of a problem brother because I plan on killing the bastard... tonight."

Alaric (to Valerie): "What are you doing?"

"Let It All Go" – Birdy and Rhodes

The Vampire Diaries 7x06 Extended Promo - Live Through This HD 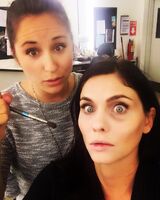 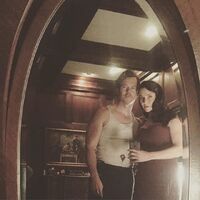 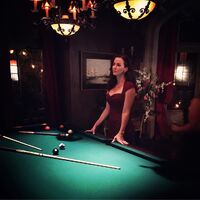 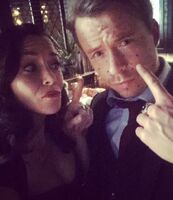 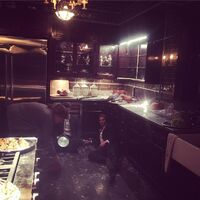 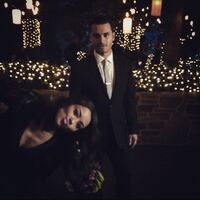 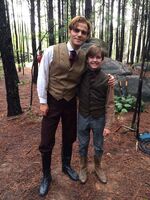 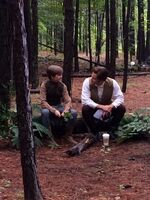 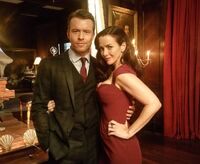 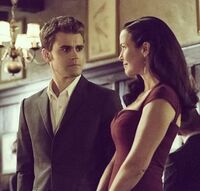 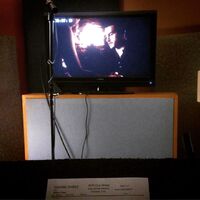 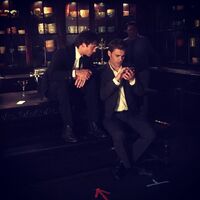 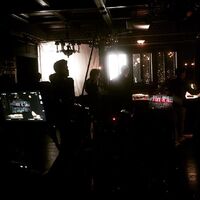 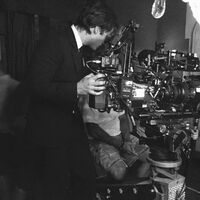 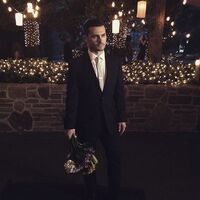 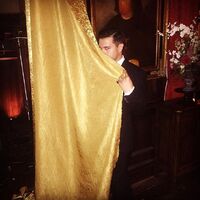 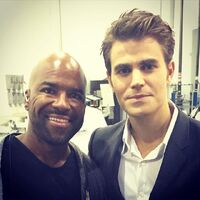 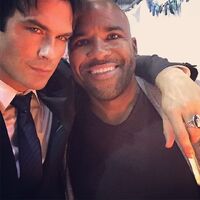 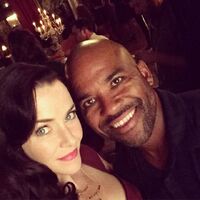 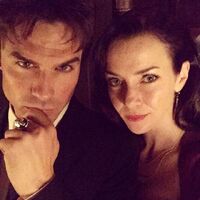 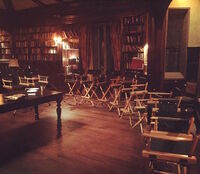 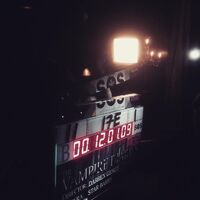 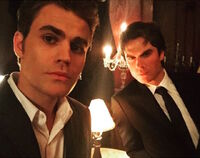 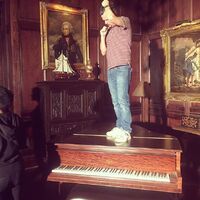 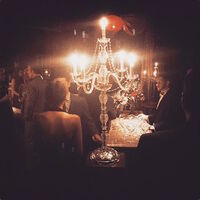 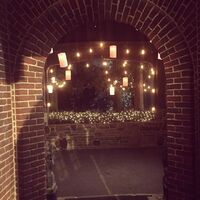 Retrieved from "https://vampirediaries.fandom.com/wiki/Best_Served_Cold?oldid=2785355"
Community content is available under CC-BY-SA unless otherwise noted.