A memorial held for Bonnie Bennett.

Bonnie Bennett's Funeral was held for Bonnie Bennett in For Whom the Bell Tolls after Jeremy finally confessed that Bonnie had died in The Walking Dead.

Elena, Damon, Caroline, Jeremy and Matt gathered around a tree stump in an open clearing in the woods. In their hands, each attendee carried a memento that held special meaning to their relationship with Bonnie and that reminded them of her. Jeremy gently laid down a beautiful photo of Bonnie laughing with Elena, Jeremy and Matt. Caroline followed suit and laid down black and red pom-poms from their high school cheerleading days. Matt placed a whistle that signifies the summers he and Bonnie used to lifeguard together on the stump. Elena released a handful of white feathers to honor the moment in season one when Bonnie revealed that was a witch. A grieving Damon offered Bonnie's grimoire. Caroline and Elena, unable to cope with their despair, clung to each other for support. Their faces were stricken with utter desolation.

Bonnie, in ghost form, observed her friends openly grieving for her, which made the event even more heartbreaking for her. She fought the natural impulse to cry, but assured Jeremy that she would be fine. "It's okay. They need this. I need this." Although he was still concerned about how Bonnie was handling the funeral and coming to terms with her death, he walked over to the stump, retrieved the bell, and then rang it. "We ring this bell in Bonnie's honor. In remembrance of her…" He paused, at a loss of how to do his beloved justice, but Bonnie, seeing how overwhelmed he was, stepped up to make her own speech for Jeremy to translate for her loved ones "Say I'm not going anywhere," she told him. "Say that even though they couldn't see me, I've been there all along." Jeremy obliged and repeated her statement.

Bonnie then moved from friend to friend and delivered a special message for each of them. Her first stop was Elena. "I watched you have the summer of your life. I saw you happy. And I know you think now that you can't have a normal life, that you have to be here for everyone, but you don't. Everyone will find their own way. So, you are gonna repack your things and you are going to college, and you are going to live it up." Bonnie's reassuring words made Elena miss her even more, and she wilted into Damon's open arms.

Bonnie then walked over to Matt and smiled at him. "You didn't do anything wrong, Matt. I would have sent you 300 emails back if I could. I miss you." Matt struggled to keep from breaking down, but Bonnie's soothing words made him so overwhelmed he was unable to keep himself from crying.

Bonnie then approached Caroline. "Caroline, I watched you decorate that dorm room like your life depended on it." Caroline burst out laughing for just a moment before she began to sob. Bonnie also had difficulty composing herself to continue. "And I know college isn't everything you expected, and that you feel like something's missing, but…."

Suddenly, she glanced up, and she was surprised to see Tyler Lockwood, dressed in a dark suit, making his way through the clearing. In his hand was a single white rose. Bonnie and Jeremy both shouted "Tyler!" in unison, alerting Caroline to his presence. She ran toward him and hugged him tightly as he pulled her close to him. He seemed relieved by her reaction to his presence at the funeral. He then placed the flower down upon the tree stump.

At the sight of her friends reunited, Bonnie was overcome with tenderness towards them, causing her face to light up. "This is good," she pointed out to Jeremy. "This is all I wanted. I'll be okay. We'll all be okay." While she tried to stay strong in the middle of her funeral, Jeremy reached out and grabbed her hand, though neither of them could feel the other's touch. 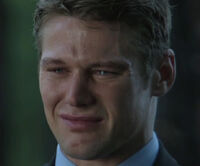 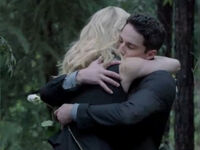 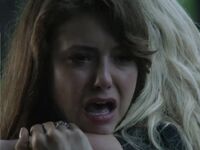 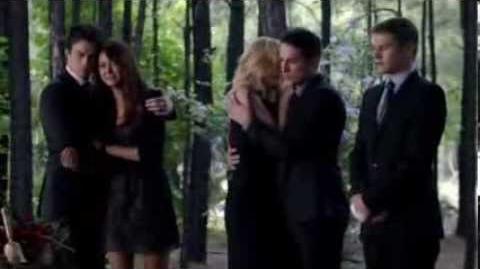 Retrieved from "https://vampirediaries.fandom.com/wiki/Bonnie_Bennett%27s_Funeral?oldid=2778371"
Community content is available under CC-BY-SA unless otherwise noted.