The Vampire Diaries Wiki
Register
Don't have an account?
Sign In
Advertisement
in: Help Needed, Relationships, Enemy Relationship,
and 2 more

Dated, Sexual, Former Boyfriend and Girlfriend; They lived together, They are in love with each other, They care for each other, Enzo said that she is his world; Former Frenemies, Former Allies; They have saved each other's lives both in the past and in the present, They worked together to be safe from the Armory, Enzo left her against his will, Bonnie managed to get Enzo's humanity back on, Bonnie tried to contact him after his death, She saved his soul from Hell by pulling it into her own personal dimension, He continues to watch over her as she lives out her life.

Total Eclipse of the Heart

Dated, Former Boyfriend and Girlfriend; Ended (Enzo is dead, but watches over her.)

The romantic relationship between the witch, Bonnie Bennett and the vampire, Enzo St. John.

Their relationship began in Total Eclipse of the Heart, when Enzo, who was working with Damon to track down the remaining Augustine members, decided that the best way to get Bonnie to help them find Wes was to threaten her boyfriend, Jeremy, with death. This set their relationship off to a rocky and antagonistic start, but they were ultimately able to set aside their dislike of each other to focus on bringing Enzo and many of Bonnie's friends back from the Other Side before its collapse.

In Season Seven, we see the pair in a romantic relationship, but in a flash forward, after Bonnie gets in trouble with the Armory, three years ago, and Enzo stepped up to keep them away from her. Enzo moves Bonnie up in a cabin, and over the years the two began to grow close. Two years later, after their romantic feelings had build up, the two started a romantic relationship and fell in love. After dating for three years, they have been separated due to the Armory's Monster mentally incapacitating him to do the creature's biding (along with Bonnie and Enzo's best friend, Damon). Bonnie, along with their friends, have tried to find and save Enzo and Damon from their mental hijacking by the Armory's unknown and mysterious creature. They are officially reunited in Coming Home Was a Mistake, after Bonnie managed to get Enzo's humanity back on.

They are known as "Bonenzo" or "Benzo" (unofficially) by fans.

In I'll Wed You in the Golden Summertime, Enzo is seen knocking at the door of the Salvatore boarding house. Bonnie is the one who answers the door only to close it immediately when she sees him. He holds it open and explains that he's there to visit Lily who must be lonely and hungry. When Bonnie refuses to let him in, he gives her an iPod, asking her to give it to Lily and telling her that it contains loads of songs from the last era she knew.

In Hello, Brother, the season opens up with revealing that it's been months since Bonnie has last been with Enzo. Bonnie and Stefan have been searching for Enzo and Damon for months while knowing that the Armory's monster was mentally controlling them. When they finally get another lead on them, Bonnie refuses to have hope on finding them, but Stefan convinces her to come along for searching their supposed location anyway.

When Bonnie and Stefan do find Enzo and Damon, they tell Bonnie and Stefan that it was a bad idea to find them. When Bonnie refuses to leave because of trying to find Enzo, this puts Stefan and Bonnie in more danger. When Enzo finally appears, Damon puts Bonnie into a chokehold, which she cannot defend herself against being she has no more magic. Stefan finally convinces Damon to let her go. Eventually, Bonnie and Stefan decide to leave, while leaving Enzo and Damon behind. After leaving them, Bonnie exclaims how Enzo was trying to help them with information regarding the creature from the vault. Bonnie now has hope again that she can rescue Enzo and Damon from the Armory's monster's clutches, which is later revealed to be a Siren.

In Today Will Be Different, in an another attempt to free Enzo from Sybil's mind control, Bonnie tracks him down and they share a passionate moment together. While in tears, Bonnie begs Enzo to come back to her. However, Enzo promises that he will find his way back to her, but he cannot risk Sybil seeing Bonnie in his mind.

Enzo decides to go back to Sybil in an attempt to keep fighting her mind control, also to protect Bonnie from being discovered in his mind by Sybil. Also, earlier in the episode, Enzo pushes the memories of Sarah Nelson (a final family member to the Salvatore family) into his mind when Sybil tries to find what he has to keep control over himself. It was an attempt to protect Bonnie, but it also cost Sarah her life. In You Decided That I Was Worth Saving, Bonnie is held hostage by Sybil, with Caroline, and Bonnie is forced to rush to Enzo's aid when Sybil forces Damon and Enzo to fight to the death. Bonnie first sends Caroline to defend Enzo against Damon and Stefan, but Enzo and Damon break the necks of Caroline and Stefan and continue to fight brutally. Bonnie finally rushes to Enzo's side and they embrace passionately. Sybil then impatiently states that Enzo must turn his humanity off to save himself and Bonnie. Bonnie begs Enzo in tears not to turn his humanity off, but Enzo says he will do it anyway to save Bonnie and he is certain that Bonnie could bring him back to himself again. So Bonnie is forced to watch Enzo turn his humanity off and he submits himself to Sybil. Sybil then asks Damon to kill Bonnie and asks Enzo if he has a problem with that, to which Enzo responds 'no' twice. In tears, Bonnie is forced to run for her life as Sybil counts down from ten to have Damon kill Bonnie. When Damon catches Bonnie and nearly kills her, Alaric comes in to save her from Damon, Enzo and Sybil.

In An Eternity of Misery, although unseen, it was mentioned that Bonnie took care of Enzo after he was knocked out in front of the Armory, with Sybil. According to Caroline, Bonnie is trying to get Enzo's humanity back on even though Enzo is saying hurtful things to Bonnie while she is trying to get through to him.

In Coming Home Was a Mistake, Bonnie is still trying to get through to Enzo, as she uses a magical object to keep him trapped inside their cabin. After receiving the news about Tyler Lockwood's death this motivates Bonnie to fight harder for Enzo. Skipping out on Tyler's funeral to help Enzo, Bonnie calls Caroline to see if she could give her any advice to help Enzo. Caroline tells Bonnie that facing her fears was how she got her humanity back on. Bonnie has one last talk with Enzo before getting an idea, leaving him at the cabin for a couple of hours. Once she returns Bonnie notice Enzo decorated the cabin like their first New Years Eve night, pretending as though he remembers their date night together. Though Bonnie ignores his banter as she begins to throw gasoline all over the cabin. She tells Enzo she knows his biggest fear is being abandon, so she promises him that she isn't leaving him as she lights the cabin on fire. As the cabin begins to burn down, Enzo lets her know he isn't falling for it, refusing to switch his humanity on still. Bonnie refuses to leave him as the cabin burns down with them inside. The smoke gets in her lungs causing her to collapse onto the floor. After awhile she's no longer responding, Enzo notices and begins to get worried, as he realizes Bonnie could be dying, Enzo finally turns his humanity back on and rescues her.

Once Bonnie awakes outside, she notice Enzo is back but trapped inside the burning cabin. He tells Bonnie it's his time and that she loved him more than anyone, and that it was enough. In a panic Bonnie rushes back inside and burns herself onto the candle to stop the spell. Enzo sees that she's hurt and gets them both of the cabin. He then apologizes for almost killing her, she tells him it's okay, Bonnie lets him know that he's stuck with her forever and that she'll never leave him. They have kiss as their home burns down. Later on the two meet up with the gang to honor Tyler Lockwood.

In Detoured On Some Random Backwoods Path to Hell, Bonnie and Enzo are seen together in Bonnie's bed, after a night of passion. They have a conversation about missing each other while they cuddle on her bed. However, Enzo gets up to grab his phone and suddenly collapses to the floor, cringing in pain from Sybil's siren song as Bonnie worryingly comforts him.

Later on, Bonnie asks Stefan and Matt for help in saving Enzo from whatever is crippling him. Enzo explains that Sybil is mentally incapacitating him as revenge for escaping Sybil's clutches. Enzo is seen lying on a couch in pain and distress with Bonnie by his side as Stefan works to help Enzo by going inside his head. By doing this, Stefan explains that it is only making matters worse for Enzo, but he continues to do so with Alaric's insistence being Damon, Sybil and Seline kidnapped his siphoner twins. After some time, Stefan and the others find where Alaric and Caroline's children are being held. They go to rescue the twins while Bonnie stays with an unconscious Enzo and Matt. Matt insists that Enzo is strong and will get through this, but Bonnie is almost out of hope, until Enzo awakens shortly after Bonnie and Matt's conversation and makes a playful jab that he could kiss them both. Bonnie is overjoyed to see that he broke from Sybil's mental song and hugged him tightly with happy tears following from her eyes.

In The Next Time I Hurt Somebody, It Could Be You,

In The Simple Intimacy of the Near Touch,

In You Made a Choice to Be Good,

In The Lies Will Catch Up To You,

In It's Been a Hell of a Ride,

In We're Planning a June Wedding,

In I Was Feeling Epic, Enzo comes to Bonnie as she is fighting back the Hellfire that was summoned from the Founder's Bell. She's tells herself that she can do it and that it's not her time. He appears to her and asks her that now she's willing to fight? She believes that she's losing it and that it's too strong for her. He encourages her that she can to anything that she sets her mind to and reminds her that she's never along. He departs with those encouraging words and countless other Bennett witches, beginning with Shelia comes to her aid.

Once Mystic Falls is saved from destruction, she plans to fulfill Enzo's wish and live out the rest of her life, beginning with traveling abroad. As she packs a bag, Enzo continues to watch over her reminding her of her passport, though it's clear that she can no longer communicate with her love. He attempts to caress her check and for a moment believes that a presences was with her, though she dismisses it and sets off for a new adventure. 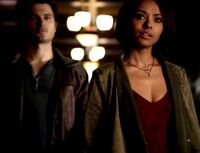