It has been suggested that this article be merged with Bonnie Bennett/Relationships. If you disagree, leave a message here.

Enemies; They have both physically fought with each other, They have rarely interacted but their moments were antagonistic, Bonnie was ready to put Kol down so that Jeremy could stake him.

Enemies; Separated (They lost touch over the years)

The relationship between the Witch, Bonnie Bennett and the Original Vampire, Kol Mikaelson.

In All My Children, Bonnie and her mother, Abby, assisted Esther in her ritual to kill the Originals. Bonnie briefly saw Kol and his brothers approaching to stop the spell, where Esther told her and her mother to quickly hide. She was next seen fleeing into the witches house with Abby.

In The Murder of One, Bonnie is forced to do a ritual that unlinks all the Originals from the binding spell, in which Klaus threatens her with the safety of Jeremy. Kol is waiting for his brother's signal in Denver to attack Jeremy from a simple message over the phone. Klaus gives Kol his thanks, saying they will be in touch.Bonnie is aware of this, and agrees to perform the spell so Kol won't kill Jeremy.

In After School Special, after Bonnie had been visiting her mentor, Atticus Shane, she left his office and casually walked down the hall, passing Kol as she did. She glanced at the Original curiously while he simply returned her gaze with a smile. She turned the corner to realize that she'd seen him somewhere before. Finally recognizing who he was, Bonnie rushed back into Shane's office. He however, had already been taken by Kol who found out that Shane knew the location of the supposed cure for vampirism.

Kol then tortured Shane by drowning him for information. Bonnie knew how much danger her mentor was in, thus casting a spell that would protect him from any harm. This proved successful when Kol impaled Shane, hoping to murder him after discovering he was trying to awaken the immortal, Silas. Her spell protected Shane without Kol's knowledge, allowing him to live despite being stabbed through the chest with a metal pipe. Bonnie effectively stopped Kol from succeeding with his own plans.

In A View to a Kill, Kol ambushed Bonnie at the school, desperate to stop her and her friends' search for the cure. He grabbed her by the throat, telling her that they wouldn't be able to get to the cure if she was too dead to find it. Showing her his fangs, he tried to kill her but Bonnie, despite extreme fear and surprise, defended herself with her newly learned expression. Her magic hurt Kol, sending him crumbling to his knees and letting out shouts of agony. However, she began to lose control of the magic and ran, scared not only by Kol but of her own abilities, leaving Kol in a heap on the floor.

Kol continued his attempts to stop their hunt for the cure, being led into a trap by the Gilberts, who allowed him into their home. The plan was to have Bonnie immobilize him with her expression long enough for Jeremy to stake him. However, due to interference by her parents, Bonnie couldn't get there but after a violent struggle, Kol was killed by Jeremy with the white oak stake. Bonnie arrived only minutes later, stopping Kol's brother Klaus from murdering Elena and Jeremy in revenge, trapping him in the home with Kol's charred body.

In Graduation, after Bonnie had dropped the veil to The Other Side, Kol confronted her at her graduation. He told her that the graduation was filled with the vengeful spirits of the dead hybrids and witches that had been sacrificed in the Silas massacres. He also explained that he wanted the veil to The Other Side to be brought down permanently so he can live again. Bonnie brought him to her body and showed him that she was dead, telling him that she wanted to live again too. However, she trapped him behind a magical barrier, telling him he'd be stuck there until the veil went back up, explaining that they don't always get what they want.

Kol: "Greetings, little witch."
Bonnie: "I thought Stefan got rid of you."
Kol: " He did, and I spent the night crawling out of a cement grave. Isn't that the witch your friend Caroline killed? And over there, that's my hybrid friend, Adrian. Also dead. In fact, these seats are scattered with two dozen supernatural faces, all of whom have reason to lash out since their lives were sacrificed in order to make your Expression triangle. All they're waiting on is word from me."
Bonnie: "The veil goes back up tonight. Don't you have anything better to do than harass me and my friends?"
Kol: "Well, that's the thing. I don't want the veil to go back up. In fact, I want you to drop it completely, so I and my fallen friends can live, Bonnie. It's time to pay the piper."

Bonnie: "The Kol I remember was adamantly against hell on earth."
Kol: " I was, till I was in hell. Now I would very much like to be back on earth. What's this?"
Bonnie: "It's me. I died last night. I'm a ghost, and I want the same thing you want. I don't want to be on the Other Side with unfinished business. I want my parents to see me off to college, I want to decorate my dorm room with my best friends. I want to stay here, Kol. More than anything."
Kol: "Then what are we waiting for? Let's do it together. What have you done?"
Bonnie: "This will hold you till dark. Then, when the veil is back up, this town will be rid of you for good."
Kol: "But everything you just said–"
Bonnie: "It was true. But we don't always get what we want, do we?" 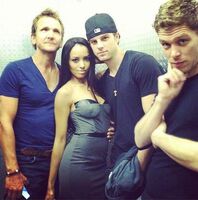 Retrieved from "https://vampirediaries.fandom.com/wiki/Bonnie_and_Kol?oldid=2778465"
Community content is available under CC-BY-SA unless otherwise noted.