THE NEW NORMAL — Elena's new outlook has everyone concerned, leading Stefan and Damon to agree that going back to the normal routine of high school would be the best thing for her. Caroline is pleasantly surprised when Elena decides to rejoin the cheerleading squad, but her pleasure turns to shock when Elena's behavior proves dangerous. Not giving up on their search for the cure, Damon and Rebekah work together until his unwanted advice catches her off-guard. Klaus tries to use Hayley to get the information he's after and makes an intriguing discovery in the process. Meanwhile, a bored Elena throws a wild party and gets into an ugly fight.

Damon: (about Elena) "That's the plan? You're gonna take her back to school?"
Stefan: "Well the fun route didn't actually pay off, did it?"
Damon: "I don't know... (He smirks) Got a free meal out of it."
Stefan: "Look, you think I want to go to school and play chaperone? You can't go because you're not a student. Besides you have to look for Katherine. I mean, Elena needs this cure now more than ever."

Klaus: (to Hayley) "You were foolish enough to make a deal with Katerina Petrova. She used you to find the cure, and now you're just a loose end. You'll be lucky if she lets you live."

Klaus: "I can't help you, mate. Hayley's off-limits. Although, I did have a run in with a vampire who may know where Katerina is."

Sheriff Forbes: "The entire blood supply from the hospital? All of a sudden just gone. Vanished."
Stefan: "I don't understand... Are you accusing us?"
Sheriff Forbes: "No, I'm not accusing you, but this town is at a tipping point. Any more unexplained house fires and things are going to boil over. (Stefan looks guilty and apologetic) I'm sorry. I know it's not your fault. It's been a rough week. Miranda Gilbert was one of my best friends in high school. To see what's happened to her family is just..."

Stefan: "Elena's sire bond stems from her feelings for you. With her humanity off, she has no feelings."
Damon: "All I wanted to do was break that damn bond. You're telling me now this whole time all she had to do was turn it off? What happens if she turns it back on?"

Klaus: "If I simply killed Tyler, my revenge would be over in a moment. Sentencing him to a lifetime of paranoia and fear-- that's Tyler's true punishment."

Stefan: (to Caroline about Elena) "Alright listen, you search the woods. I'll check the road. If you see her... Don't hesitate, just snap her neck. Got it?"

Caroline: (on phone) "Hey Tyler. It's me. You'll never believe the crazy day I've had. Look, I know that you said you wouldn't, but I really wish that you would answer. It'd be great to talk to you."

Klaus: (upon seeing Hayley's crescent-moon birthmark on her shoulder) "That mark... I've seen it before."
Hayley: (rolls her eyes) "Yeah, it's a birthmark. People have those."
Klaus: "In my considerable lifetime, I've only seen that mark on a handful of others, all from the same bloodline. A werewolf clan that once thrived through of what we now call Louisiana."

Stefan: "Well, we got a little problem. You said blood was stolen from Grove Hills Hospital? Sheriff says there's been reports of 6 other blood bank thefts all within thirty miles of Mystic Falls. Somebody's stockpiling blood. It wasn't Elena. It's not us."
Damon: "Okay, so...?"
Stefan: "I think Silas followed us back from that island. He hasn't fed in two thousand years, so he'd need to gorge on blood."

Stefan: "Her humanity is switched off. She's numb to everything that makes her who she is."
Damon: "Fine. We'll show her a good time."
Stefan: "You really think that's gonna work?"
Damon: "There's only one way to find out."
Caroline: "You're feeding on the competition!"
Damon: "Show a little restraint."
Elena: (Elena walks in naked) "What? It's nothing you guys haven't seen before."

Caroline: "Elena!"
Caroline: "I think taking her back to school is a great idea."
Damon: "Don't eat anyone." 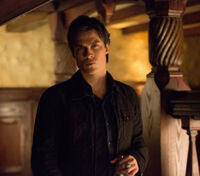 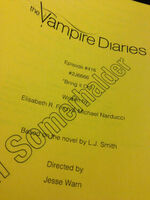 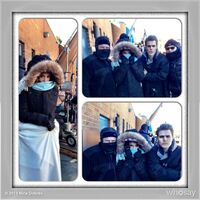 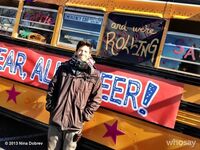 Stefan talking with Damon about Elena 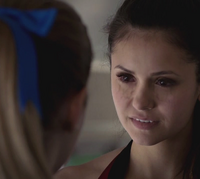 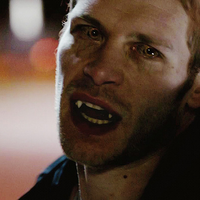 Retrieved from "https://vampirediaries.fandom.com/wiki/Bring_It_On?oldid=2787253"
Community content is available under CC-BY-SA unless otherwise noted.