Bringing Out The Dead

A FAMILY DINNER — Sheriff Forbes delivers some disturbing news to Alaric and Elena about a weapon used in a recent murder. In the Salvatore brothers' escalating quest to kill Klaus, Stefan turns to Bonnie and Abby, while Damon reaches out to an old acquaintance for help in setting up an elaborate plan. Intent on a plan of his own, Klaus hosts a strange dinner party, where he reveals another story from his family's violent past until an unexpected guest brings the party to an end. Meanwhile, Caroline is heartbroken when she is unable to stop a tragedy from unfolding.

After Elijah has killed the hybrid, Klaus being surprised, makes him understand that he wasn't the one who undaggered him. After Klaus indicates that he did keep his promise and reunited him with his family, Elijah attacks Klaus out of anger. Klaus tells him that Mikael is dead, and that calms him down. But he is curious about why Finn is still in a coffin after 900 years, and Kol after over a century. Klaus says he needs his help to destroy Stefan, and once they have the coffin back from him, he will make their family whole again.

The next morning Sheriff Forbes visits Elena and Alaric, and informs them that Elena's fingerprints are on the weapon that was used to kill Brian Walters, the medical examiner, also a member of the council. Meanwhile, Damon is meeting with Elijah, who found the note that he left in his jacket pocket when he undaggered him. Damon asks him if he knows who or what might be in the coffin that is sealed with a spell, while Stefan is taking Abby and Bonnie to the secret Lockwood cave where they keep the coffin, so they can open it.

Back in the hospital, Meredith complains to Caroline that her dad should be more grateful for saving his life. Caroline says he always hated vampires so he hates the idea that vampire blood had saved him. Meredith tells her that she signed his discharge papers last night to shut him up, but Caroline says he didn't call her. So she calls him, but is surprised to hear his phone ringing somewhere in the hospital. She follows the ringing, only to find her father stabbed and murdered violently by the serial killer. She is devastated, but kind of relieved when she remembers he had vampire blood in his system so he will come back to life.

Back in the Lockwood cave, Bonnie tries to find the correct spell by searching the grimoire. Abby asks what all these carvings mean, and Bonnie tells her the genesis of vampirism. Later they find that in order to unseal the coffin, 2 generations are needed, like parent and child. If Abby can unlock her powers, they can open the coffin.

To buy them enough time, Stefan and Damon are prepared to visit Elijah and Klaus to negotiate a fake truce. When they arrive, after some conversation, Elijah and Klaus tell them about Tatia, who is the originator of the Petrova line, also known as the Original Petrova. Stefan is humored to learn both Elijah and Klaus loved the same girl. Meanwhile, Bill wakes up at the hospital, but to Caroline and Elena's surprise, he says he won't drink human blood and become a vampire. They take him home, and Elena calls Elizabeth and tells her what happened.

When she and Bill are inside, Elena tries to console her friend. Later, Matt comes and they hug. Elena and Matt leave and Matt walks her home. Caroline tries to convince her father that he can handle being a vampire, and says that she can't lose him, and begs him not to leave her. But he consoles her, and eventually dies. When Elena arrives home, she sees blood on the kitchen floor and then realizes that blood is everywhere. She follows the blood, and is shocked to find that Alaric has also been stabbed by the serial killer. Luckily, Alaric isn't dead yet, and tells Elena that she has to kill him, trusting that Elena being a doppelgänger, meaning supernatural species, that his ring will revive and heal him. She reluctantly agrees and kills him. Luckily, a few hours later he wakes up, healed. Back in the Lockwood cave, Bonnie realizes her mother's powers are blocked due to fear.

She tries to make her embrace her powers, as she is the only person who can help her, and they give one last try. They succeed, and the coffin is opened. After Damon gets the news from Bonnie by message, he offers Klaus his coffin back and in exchange asks him and his family to leave Mystic Falls forever. But Klaus has no intention to leave Elena behind. He suggests that it will not take time until one of the brothers turns her into a vampire, but Klaus needs her bloodline continue in order to have doppelgängers every few centuries, so he offers them her happy human life with Matt. Stefan is annoyed by the idea and says there is no deal, which makes Klaus angry.

He threatens Stefan, which makes Damon give up and agree to bring the coffin. But to everyone's surprise, him and Elijah undaggered the remaining originals. After Finn, Kol and Rebekah arrive, Elijah tells Stefan and Damon that they are free to leave. Damon and Stefan visit Bonnie and Abby only to find them on the ground, passed out. They are still alive, but Damon is not happy with seeing whatever inside the coffin is gone and will be no good to them. In Klaus' house, Rebekah, Elijah, Finn and Kol tell Klaus that they are leaving him forever. Their heated argument ends as Esther , their mother walks in to everyone's surprise. Klaus is scared that she is here to kill him, but she tells that she is here to forgive him, and it is about time for them to be a family again.

Elijah: (to Klaus) You seem surprised to see me? So it wasn't you who removed the dagger from my chest?

Klaus: (to Elijah) "Help me destroy Stefan, and I promise you that our family will be whole again!"

Damon: "Elijah, my favorite Original, back from the dead."
Elijah: "You left something in my jacket pocket."
Damon: "Yeah; "Dear Elijah, let's get together over the destruction of your brother. XOXO..."
Elijah: "...Damon."
Damon: "We're not gonna have a problem, are we?"
Elijah: "Well, I'm here, so let's talk."

Damon: "Get dressed, we're going out."
Stefan: "Yeah, sorry, I'm not interested."
Damon: "I didn't ask. Elijah and I have scheduled a very old-fashioned sit-down with you and Klaus. I was thinking the black. Makes you look all villain-y."
Stefan: "Klaus won't make a deal, Damon."
Damon: "He doesn't have to. All we're doing is buying a little time to give our wicked witches a chance to pop the top of the coffin."
Stefan: "So that's your, uh, plan? Stall Klaus?"
Damon: "If you didn't go postal on his hybrids, then maybe we'd have some options."
Stefan: "So you unleash an Original to help him out?"
Damon: "Undaggering Elijah was smart, Stefan! Are you kidding me? After what Klaus did to him, he's in vengeance mode! Perfect."
Stefan: "Nothing smart about trusting Elijah, Damon. He screwed us over the last time he promised to kill Klaus."
Damon: "And the way you've been acting, I trust him about as much as I trust you."
Stefan: "Hm.. Well I guess that goes both ways, doesn't it?"
Damon: "Oh yes, this is about me kissing Elena. Just remember if it wasn't for Klaus, you wouldn't become such a dick and that kiss would never have happened. So get ready, and get happy, we are going to negotiate a fake truce, and I don't want your attitude screwing it up."

Klaus: (to Damon) "Bring me my coffin before I burn him alive."

Elena: "I'm a doppelgänger... That makes me supernatural."

Finn: (to Klaus) "You're staying behind."
Rebekah: (to Klaus) "We're leaving you, Nik. Right after I kill that doppelgänger wench. Then, you will be alone-- always and forever." 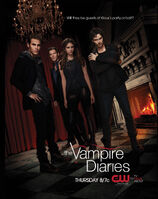 The return of Elijah. 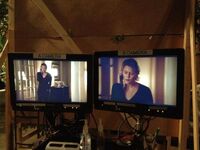 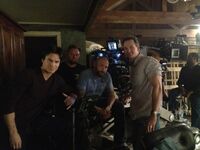 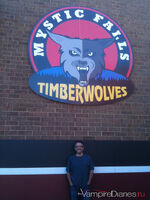 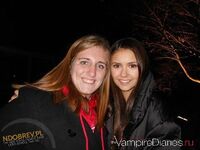 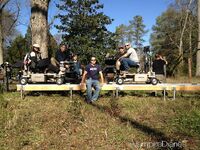 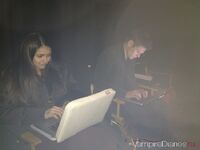 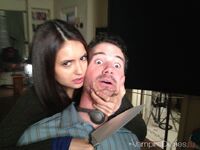 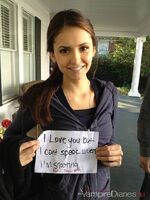 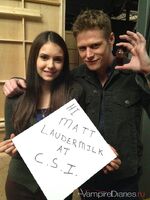 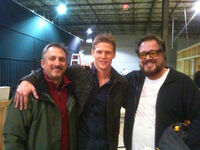 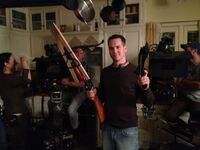 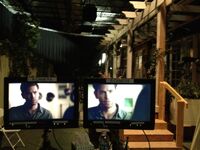 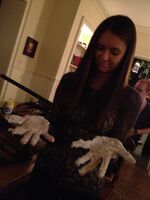 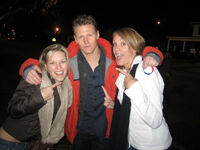 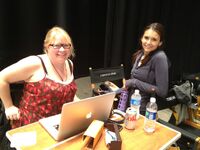 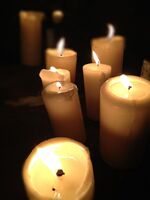 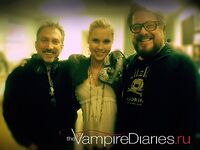 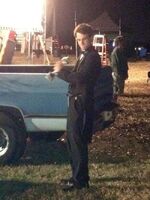 First look at Nathaniel Buzolic (as Kol) On Set 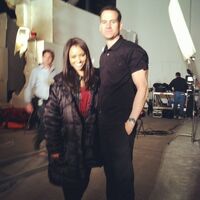 Behind the Scenes - Kat Graham "Bringing Out The Dead."

First look at Finn and Kol