Candice King (née Accola, born May 13, 1987) is an American actress, singer and songwriter who plays Caroline Forbes on the TV show, The Vampire Diaries. Accola is married to musician Joe King.

Accola was born in Houston, Texas, the daughter of Carolyn (Clark), who was an environmental engineer before becoming a homemaker, and Kevin Accola, a cardiothoracic surgeon. [2] [3] She has Romansh-Swiss, French, and Norwegian ancestry. [4] She grew up in Edgewood, Florida and attended Lake Highland Preparatory School. [5] Both her parents are active members of the local Republican political party. [6] [7]

Along with her The Vampire Diaries co-stars Michael Trevino and Ian Somerhalder, Accola is a supporter of the It Gets Better Project, which aims to prevent Suicide among LGBT youth.

Candice and other individuals (including TVD’s Kayla Ewell and Kat Graham) are participating in the fight to raise awareness regarding Lyme Disease, a disease that many people suffer from but many more are uneducated about.

On October 18, 2014, Candice and Joe got married in New Orleans. She also became a stepmother to her new husband Joe King's two daughters. On August 31, 2015, she announced that she and Joe are expecting their first child together. [9]

On January 15, 2016, Candice gave birth to her firstborn child, Florence May King.

In December 2006 Accola released her debut album, It's Always the Innocent Ones, independently in the United States. Accola co-wrote thirteen of the fourteen tracks on the record. The album failed to make an impact. In 2008 the album was re-released in Japan and achieved greater success. Accola toured as a backing singer for Miley Cyrus' Best of Both Worlds Tour. Accola appeared as herself in the 2008 3D concert film Hannah Montana and Miley Cyrus: Best of Both Worlds Concert. In February 2011, Accola performed a cover of The Bangles' "Eternal Flame", on The Vampire Diaries. [10] [11] Accola has yet to announce plans for a sophomore album. She has a younger brother. 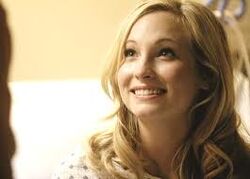 Accola has guest appeared in a number of television series such as How I Met Your Mother, Supernatural and Drop Dead Diva. In July 2009 Accola starred in the Independent Horror film Deadgirl, which centers on two high school boys who discover an immortal woman in an abandoned asylum. That same year again Accola had a bit-role in the Hannah Montana: The Movie. In 2009 Accola was cast in The CW television series The Vampire Diaries as Caroline Forbes a teenage vampire. The series was an immediate success with the series premiere reaching 4.91 million viewers. [12] Critical reception was positive. In June 2012 Accola joined the Dramedy YouTube series Dating Rules From My Future Self as Chloe Cunningham, a 26-year old girl who believes love does not exist. [13] The series centers on a girl receiving romance advices from herself ten years in the future via text message. [14] The first season of the series went on to receive over 14 million views.

Note: * Candice is uncredited while appearing in voice only.

It's Always The Innocent Ones

Retrieved from "https://vampirediaries.fandom.com/wiki/Candice_Accola?oldid=2722299"
Community content is available under CC-BY-SA unless otherwise noted.