The first car accident happened on May 23, 2009. Miranda Sommers-Gilbert and Grayson Gilbert drowned, while their adoptive daughter, Elena Gilbert, survived thanks to Stefan Salvatore.

The second car accident occured in October 3, 2010. Matt and Elena were driving in his truck, on their way back to Mystic Falls. However, Rebekah was in their way and Matt swerved, driving over the bridge. Matt was unconscious, and Elena tried to wake him up. Soon, Stefan came and wanted to save Elena first, but she insisted that he had to save Matt, just like Grayson had said to him during their accident. He saved Matt, but was too late to save Elena and she died with vampire blood in her system.

Elena was at a school party and called her mom, telling her that she needed to come home. Matt was talking to her about marriage, having children, and thinking that she might break up with him. Her dad was driving the car, when suddenly he drove off the Wickery Bridge. Stefan was nearby and he wanted to save Elena's dad first, but he insisted that Stefan save Elena first. Stefan carried her to the shore and when he came back for Elena's parents, it was already too late and they had drowned.

In Stay, it was revealed that Grayson planned a surprise trip to their Lake House. However they never made it due to taking the bridge after an storm took down an tree on the most direct route. This explains why they took Wickery Bridge that night. The storm also explains why there was no brake marks on the road. While attempting to clear some of her cases before her death, Sheriff Forbes initiately suspected Damon Salvatore to be involved in the Gilbert's car accident. However, he reassured her that he wasn't. Two hours before the accident, Miranda left her an urgent message, though didn't specify why. She would eventually learn that it was because Miranda wanted Sheriff Forbes to bust Jeremy for smoking pot. She believed had there been a supernatural reason they died, it would've been easier. Despite everything, it was just a "stupid" accident. 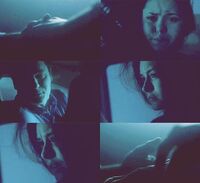