Cassie was a witch who first appeared in the fifth episode of the first season of The Originals. She was chosen by the French Quarter Coven Elder Bastianna Natale as one of Harvest girls to participate in the Harvest ritual. However, the ritual was delayed and she spent over a year with the Ancestors on the Ancestral Plane. She was eventually resurrected after the completion of the Harvest with Genevieve's death, but her body was possessed by Esther Mikaelson. Following the possession, she was sent to the Dowager Fauline's Cottage, an asylum for insane witches. While confined there, she briefly interacted with Rebekah Mikaelson but quickly became involved with the Kindred, a coven of dark witches practicing dark magic. After betraying Rebekah, she was murdered by Freya Mikaelson.

Nothing is known about Cassie’s history prior to being selected as the French Quarter Coven’s Harvest witch. She was friends with Monique Deveraux and Abigail. During the Harvest Ritual, she and her friends were sacrificed and the three of them spent their time with the Ancestors on the Ancestral Plane.

In From a Cradle to a Grave, Monique planned to kill Genevieve to complete the Harvest so that Cassie would be resurrected from the dead. After Genevieve, Monique, and Abigail are killed, in the confrontation with the Mikaelsons, Cassie rose from her grave. However, she is possessed by Esther Mikaelson. She was joined by another witch, who is possessed by her son, Finn.

Cassie was Esther’s vessel from Rebirth to Every Mother's Son, where Esther voluntarily left her body for a new host. After regaining her freedom during the Mikaelson's family dinner, Klaus questioned her as to Esther's whereabouts. Cassie, however, was confused as to what was going on and did not know Elijah nro Klaus. Elijah convinces Klaus to leave her be.

In Gonna Set Your Flag On Fire, Cassie now resides in the witch asylum and found the new imprisoned Rebekah, possessing Eva Sinclair. She was the only one who believed Rebekah, as she knew what it was like for a Mikaelson to possess her body. She explained to Rebekah that the witch asylum began with Astrid Malchance and Mary-Alice Claire over a century prior. The asylum was where the covens placed witches, such as herself, who were broken by magic. She also explains to Rebekah about the witches that have put themselves in charge. They’re known as the Kindred, witches who were banished from their coven for practicing dark magic and necromancy. They also force the other imprisoned witches to take special pills that contain Lobelia flower which makes it impossible for them to concentrate and cast magic. Despite this, she still helps Rebekah, who wanted to send a message to her brothers. They are nearly successful in casting the spell before one of the Kindred interrupts them and orders them to come for dinner.

In Sanctuary, she meets with Rebekah, commenting on her lack of cooperation with the Kindred. Rebekah has a stolen apple and means to share it with her, but Cassie refuses. She doesn’t want to get caught breaking the Kindred's rules. Rebekah is a free spirit and doesn’t intend to stay any longer. She tells Cassie about a girl in one of the locked rooms in the asylum. She is powerful enough for them to channel and to break out. Cassie likes the plan and accepts the apple.

Cassie, however, turns to the only people who she thought she could trust - the Kindred. When Rebekah finally does go to free herself, she finds the corpse of one of the Kindred, and Cassie approaches her with a newly formed scar on her cheek. She angrily tells Rebekah that she regrets not having stopped her sooner before she had killed one of their own. Her new friends then attack Rebekah, and gain the upper hand. They are quickly dealt with by Freya. Cassie attempts to flee, but Freya leaves her for last. Freya tells her that others were ignorant bullies, but she was a smart and powerful girl. And yet, she still betrayed a friend. Despising traitors, Freya places her hands on her face and shrieks in pain as she bleeds from her eyes and nose. Freya finishes the spell and kills her.

Much of Cassie's personality remains unexplored. However she was an intelligent and powerful individual as she was chosen to become her coven's Harvest witch. After her resurrection, Cassie seemed to be scared and nervous, not remembering anything about what happened during the four months Esther had her as a host. During her time being dead and being Esther's vessel, seemingly, caused her to have a nervous breakdown which led her coven to place her into the witch asylum, believing her to be 'broken'. After some time in the asylum, she appeared to be less confident in her abilities and reluctantly helped Rebekah after she reminded her that she was a Harvest witch. Believing that Rebekah wouldn't be able to free them, she turned to the Kindred, joining them and placing her trust in them.

Cassie had short, brown hair which is pixie styled and has a somewhat pale complexion. She stood at 5'2", and her frame was slim and petite. Also, like most of the other Harvest Girls, her eyes were blue.

Cassie possessed the standard powers and abilities of a witch and was chosen to become a Harvest witch by the Elders of the French Quarter Coven for her great potential. According to Freya, she was 'powerful'; this is also exemplified as Esther had chosen her as her vessel upon her resurrection.

Cassie had the typical weaknesses of a witch. 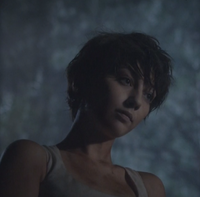 Retrieved from "https://vampirediaries.fandom.com/wiki/Cassie?oldid=2785810"
Community content is available under CC-BY-SA unless otherwise noted.