Charlotte is a vampire, whom Damon Salvatore turned back in the 1940s. She first appeared in We'll Always Have Bourbon Street, which was also her only appearance. She was sired to Damon, until he let her go in the same episode. Charlotte has not been seen since then.

It is unknown how exactly Charlotte and Damon met, but it is assumed that they met in New Orleans. In 1942, after she found out Damon was a vampire, she begged him to turn her into a vampire to be with him forever. He turned her and she became sired to him. She was madly in love with him. He asked Valerie LaMarche to help him break Charlotte's sire bond. Valerie proposed to help him with expression, but obviously failed as Charlotte still felt loyal to Damon in 2010. It is unclear if Valerie really tried anything to help to break the sire bond or if she only used the sacrifice to tap into expression for her own ends. The last time Charlotte saw Damon in 1942, he told her to wait for him on a street corner and to count every single brick that made the buildings in New Orleans until he returned.

When she saw Damon for the first time in decades, she surprised him with a kiss. Apparently, Charlotte helped the brothers recall the events that took place that could help them find out what is going on with Elena. When Damon found out how to break the sire bond, he broke up with Charlotte for good to encourage her to let things go, move on with her life, and more importantly to forget about him. This left Charlotte heartbroken even if she forgot what had just happened.

Her personality before becoming a vampire is unknown, but she was madly in love with Damon. When Damon turned her into a vampire, she became sired to him, doing everything he asked, even if he was being sarcastic or ironic. She did seem to be caring by always protecting and trying to please Damon. Sadly, she loved Damon more than he could ever love her. She was aggressive when she wanted to drink blood and towards humans in general; this actually troubled Damon as he was trying to bond with his brother before his leave.

She is of medium height, curvy figure, pale skin, beautiful, with brown/hazel eyes, and a light brown hair, however in the daylight, she has a different hair color, bright auburn red.

Charlotte possessed all the standard powers and abilities of a non-original vampire.

Charlotte had the typical weaknesses of a non-Original vampire.

Damon was the stronger romance than Charlotte had in her whole life. As a human, Charlotte felt a great attraction and loyalty to Damon, when she turned vampire, loyalty is returned devotion, and the attraction in obsession. This love, caused serious problems for Damon, as Charlotte became a puppet, unable to identify sarcasm, or indirect. Eventually, Damon tried to break the sire bond with Charlotte, but she was still devoted to him. Decades later, Charlotte becomes mentally unstable but continued her love for Damon. Damon breaks up with Charlotte with the intention that she continues to existence, without more obsession and false hopes. 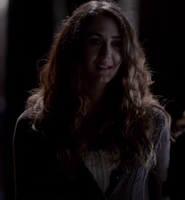 Retrieved from "https://vampirediaries.fandom.com/wiki/Charlotte?oldid=2780549"
Community content is available under CC-BY-SA unless otherwise noted.