THE SALVATORES ARE COMING TO TOWN — With the holidays in full swing, a search for Julian leads Damon and Stefan to a small town outside of Mystic Falls. While managing a holiday toy drive at Whitmore College, Bonnie seeks help from Nora and the two strike up an unlikely friendship. Elsewhere, Caroline does her best to navigate her new life as a pregnant vampire, while Alaric grows concerned that the pregnancy is effecting her more than she's letting on. Finally, after finding himself at odds with Damon, Stefan is forced to take matters into his own hands, setting off a tragic chain of events that leaves their lives changed forever.

Damon, Stefan, Nora and Valerie put Lily to rest. Later, as Christmas rings in the air, Stefan and Damon's search for Julian leads them to a town outside Mystic Falls. While they search based on Bonnie's locator spell-given address, they end their search at a bar filled with dead Santa's. After a while, Julian appears and there is a tiff between the brothers and him which later aggravates back home. Meanwhile, Nora becomes friendly with Bonnie during a toy drive. Alaric fears that Caroline is struggling with her pregnancy as her blood feeding urges keep her on the edge. Caroline shares a heart-to-heart talk with Sheriff Forbes's gravestone. Valerie teams with Stefan to abduct Mary Louise in order to force Julian to come out in the open and fight. Later, an unseen being whisks the unconsious Mary Louise away. The Salvatore brothers-Julian fight finally leads to Damon being staked by the Phoenix stone-dagger and getting trapped inside his hell. The same happens for Stefan as a revenge-seeking Nora pushes the dagger inside him, after siphoning out Bonnie's magic. It is shown that Damon is reliving his Civil War days while being trapped in the Phoenix stone - where he is gravely injured and scared.

Flashforward: Three years from now in Chicago, Stefan is picking up some stuff from Valerie's place. He burned his Porsche so he has to borrow her car to travel to Dallas to rescue Damon. She wants to go with him, but he refuses to let her come along. Valerie says that if something should happen to him, she will rain hell down on anyone responsible and they part with a kiss.

Damon: "We have a lot of disappointed faces Christmas morning."

Caroline (to Stefan): "Wait till you see me. I popped this week."

Damon: "We have a lot of disappointed faces Christmas morning."

Damon: "Just so we're clear, me helping you kill Julian is your Christmas present, so don't be expecting any socks or a TV or anything."
Stefan: "Yeah, be we gotta find him to kill him."
Damon: "We will. Bonnie did a locator spell and she said Sunberry. We're in Sunberry so....Oops. I'm dry. Pit Stop."

Mary: "Julian's not here. If that's what you're worried about."
Valerie: "Is he coming back?"
Mary: "None of your concern."
Valerie: "I left a few things. I'll just...grab them and be on my way."
Mary: "Have you seen her?"
Valerie: "Which wagon? "
Mary: "This is your fault, you know. This...fracturing."
Valerie: "Yeah if only I hadn't fallen in love and place my pregnant womb in front of Julian's boot."
Mary: "Sticking to your story are you?"
Valerie: "It's not a story."
Mary: "If by some stretch of the imagination it's not, the timing if awfully suspect isn't it?"
Valerie: "What's that supposed to mean?"
Mary: "Well, you had over a hundred years to tell this story. And you only did once you were back in Stefan's life. Till it served you. Gained you sympathy."
Valerie: "I always thought you were the nice one. That you had a heart deep down Guess I was wrong. Nora will blossom without you."

Damon (to Lily): "One swift stab straight through the heart. Let's get this over with."

Damon: "Just so we're clear, me helping you kill Julian is your Christmas present, so don't be expecting any socks or a TV or anything."
Stefan: "Yeah."

Bonnie: "You and Mary Louise... broke up. You need to move on and become your own person."

"I Can Almost See You" – Hammock

"A Great Big Sled" – The Killers

"When The Snow Falls Down" – Amy Stroup

"Home For The Holiday" – Sugar & The Hi Lows

"A Way To You Again" – Peter Bradley Adams

The Vampire Diaries Cold as Ice Scene The CW

The Vampire Diaries - Inside Cold as Ice HD 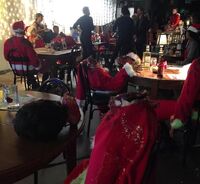 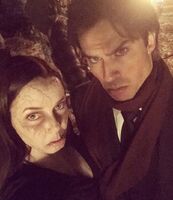 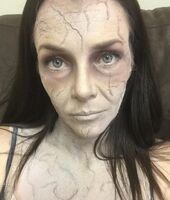 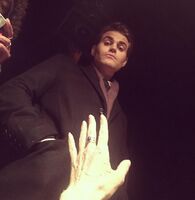 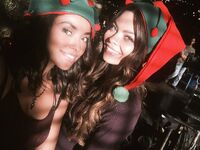 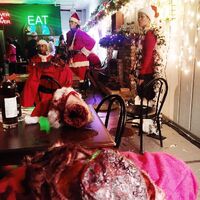 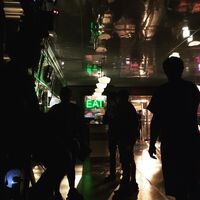 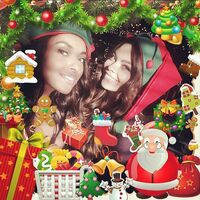 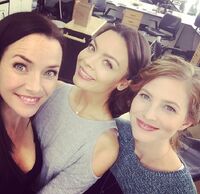 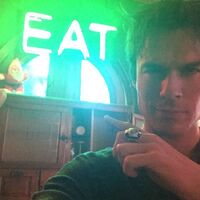 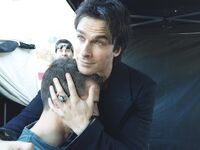 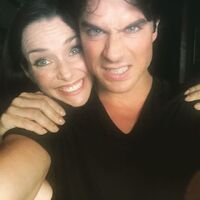 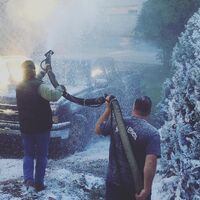 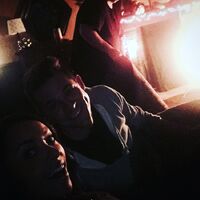 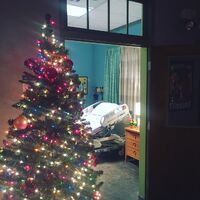 Retrieved from "https://vampirediaries.fandom.com/wiki/Cold_as_Ice?oldid=2785718"
Community content is available under CC-BY-SA unless otherwise noted.