The Council Memorial was the first event of Season Four, and was meant to commemorate the lives of all the active members of the newly-created Town Council. The service was held in Mystic Falls Church after Pastor Young blew up himself and the other eleven members of the council.

Pastor McGinnis was in charge of giving the homily. During his speech, Connor Jordan, a supernatural vampire hunter, stabbed April Young, Pastor Young's daughter, and bound and gagged her before leaving her in the balcony as bait to identify the vampires present at the ceremony. Connor aimed his stake-shooting sniper rifle while Elena gave her own speech, not knowing whether or not she was a vampire, but lost his chance to shoot her when Stefan helped her off the stage. When Tyler, who Connor had previously identified as a vampire/hybrid, went up to speak to distract the hunter, Connor shot at him with his sniper rifle and hit him in the heart, though Tyler's hybrid nature kept him from dying. The service then ended in chaos as Tyler was sent to the hospital in an ambulance by Mayor Lockwood to maintain appearances. 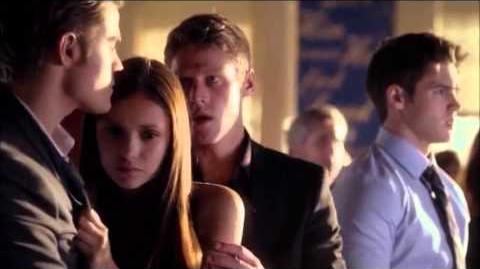 The Vampire Diaries 4x02 Connor tries to trap all the vampires at the Memorial.

Retrieved from "https://vampirediaries.fandom.com/wiki/Council_Memorial?oldid=2636435"
Community content is available under CC-BY-SA unless otherwise noted.