It has been suggested that this article be merged with Damon Salvatore/Relationships. If you disagree, leave a message here.

This is the relationship between the Vampire, Damon Salvatore and the Original Vampire, Kol Mikaelson. They were enemies who each had a particular disliking for the other. Every interaction they had usually ended up with one of them getting assaulted by the other.

In Dangerous Liaisons, Kol introduces himself to Damon and Carol Lockwood. Damon hints at knowing him and Kol states that he knows a lot of people and that Damon hadn't made much of an impression. Damon later saved Matt from Kol, who crushed his hand. Damon pushed Kol off the balcony, after struggling with him until he managed to break his neck; the majority of the people at the party saw this fight occur, which angered and embarrassed Esther.

In Heart of Darkness, after Kol "befriends" Jeremy in Colorado, he attacks Damon with a baseball bat for interfering with his and Klaus' plans. The wooden bat breaks, so he attempts to hit Damon again, this time with an aluminum bat. Fortunately for Damon, he impaled Kol with a piece of the broken wooden baseball bat. This gives Damon, Elena and Jeremy enough time to escape before Kol could recover. Later on, Kol killed Mary Porter, the only vampire who could tell them who created the bloodline the Salvatores and Caroline descend from. Kol teases Damon as to which Original created the bloodline. He assures Damon that he doesn't want to kill him or Elena, and that he just wants to make them even, as Damon had killed his brother Finn, embarrassed Kol at the party, and staked him with the bat earlier. Kol then hits Damon with yet another baseball bat, and takes off running.

In Catch Me If You Can, Kol slaughtered the group of vampires that Klaus and Damon had prepared for Jeremy to kill in order to complete his Hunter's Mark. He revealed himself to Damon and Jeremy, ordering them to stop their search for the cure, but Damon resisted, stating how he just simply doesn't like Kol. Kol threatened to tear off Jeremy's limbs, so Damon attacked him to protect Jeremy. Damon managed to land a few clean punches on Kol, who simply smiled at the assault before blocking and regaining the upper hand, taking Damon captive. He tortured Damon by compelling him to stab himself with a large piece of wood, which also served to prove that Damon wasn't on vervain (although the town's supply of vervain had been gone for quite a while). Damon told him to kill him like a man, but Kol didn't want to kill Damon. He had promised his brother that he, personally, wouldn't go after Jeremy again so he decided to compel Damon to kill Jeremy instead, and let him loose on the young Gilbert boy. Damon's compulsion to kill Jeremy by Kol's hand upset Klaus and Rebekah and nearly got Jeremy killed, forcing Stefan to lock Damon up in the cellar, until they could neutralize Kol and lift the compulsion. This was the last time Kol and Damon meet.

In A View to a Kill, Kol was killed by Jeremy and Elena. His compulsion over Damon has been lifted after his demise.

Damon: Damon Salvatore. Have we met?
Kol: I've met a lot of people. And you don't particularly stand out.
Damon: Easy on the hand. Guy's a quarterback.

Damon: Mary.
Kol: Quite contrary.
Damon: Don't touch her!
Kol: Oh, dear, I've hit a nerve. Relax, darling! I just want us to be even. You snapped my neck. You killed my brother. Then, you humiliated me. There. Now we're even.

Kol: Care for a drink?
Damon: He's underage and I don't like you, so let's just cut to it.
Damon: Oh, you must be talking about Silas.
Kol: What do you know of him?
Damon: Nothing. Don't want to. Not our problem.
Kol: Isn't it?
Damon: Uh-uh.
Damon: Well, we're not going to back off from the cure because you were told one too many scary bedtime stories, you idiot.
Kol: Very good, darling. Now stab yourself a little bit further.
Damon: If you're going to kill me, do it like a man.
Kol: I don't want to kill you. I just wanted to make sure you can be compelled.
Damon: I'm gonna rip out your spleen.
Kol: You ought to be thanking me. I mean, you don't really want the cure found. You fancy Elena! Even more now that she's a vampire. Admit it. The last vestige of her humanity is her annoying little brother, Jeremy. And deep, deep down...I bet you want him dead. Don't you?
Damon: Nope.
Kol: You're lying. I bet you'd love to rip his head right off. And I'm going to give you your wish. You're not going to remember what I say, but you are going to find Jeremy Gilbert, and when you do...you're going to kill him.

--Catch Me If You Can 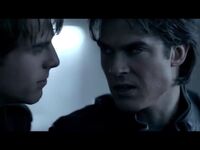 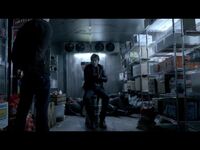 Retrieved from "https://vampirediaries.fandom.com/wiki/Damon_and_Kol?oldid=2778477"
Community content is available under CC-BY-SA unless otherwise noted.