Ex-Fling, Sexual (One Night Stand); Frenemies; Damon pretended to be in love with Lexi (decades ago), Lexi cared about Damon (before he lied to her decades ago), Damon set Lexi up as being the vampire in Mystic Falls killing its residents and killed her as a result, Lexi resented Damon for killing her during her time as a ghost on the Other Side, Damon admitted to feeling remorse for hurting Lexi (decades ago) and for even killing Lexi, Lexi skipped her chance at being resurrected so that Damon could be resurrected (for Stefan's sake).

The relationship between the cured vampire Damon Salvatore and the deceased vampire Lexi Branson.

They originally met in 1864, after he and his brother Stefan had just turned into vampires. Stefan, overwhelmed with the bloodlust that comes from being a new vampire, was killing his way through Mystic Falls when he eventually met Lexi. She agreed to help Stefan learn to control his hunger, but Damon, who was appalled by Stefan's behavior, decided to leave town without Stefan, but not before asking Lexi to take care of his little brother.

In the end, it was Damon who killed Lexi. He mainly did it in order to prevent the Founder's Council from finding out that he and Stefan were vampires, but he has admitted that it also served to help him deal with his guilt of his past actions against her. However, he has shown some remorse for it on several occasions. Their relationship could be classified as that of "frenemies."

Lexi, who had been helping Stefan control his bloodlust for several decades now, insisted it was time for Stefan to make peace with his brother. She accompanied Stefan to New Orleans, and watched as he approached Damon at the bar and admitted that he wanted to bury the hatchet. Damon and Stefan hugged and have a couple of drinks together, where Stefan mentioned that he was being deployed to Egypt to help fight in the war. Damon, interested in reconnecting with his brother, volunteered to join him. When Stefan left to order another round of drinks for all of them, Lexi urged Damon not to go with him, as their difference in lifestyle would only be a bad influence for Stefan, as Stefan has difficulties controlling himself on human blood.

In the end, just as Damon was about to join Stefan in the war effort, Lexi appeared and she argued that if Stefan knew that Damon had just killed twelve people to break his Sire Bond with Charlotte with little remorse, Stefan would want to learn how to cope with it as well and would eventually return to being a Ripper. Damon insisted that he had no ulterior motives and that he just missed his baby brother, but she told him he needed to put Stefan's needs before his own and let him go. As much as he didn't want to do so, he decided to listen to Lexi and bailed on his intent to join the war effort. Shortly after this, Damon flipped off his humanity switch after being held in captivity and tortured by the Augustine Society at Whitmore College.

In Because the Night, it was revealed that Damon kept his humanity turned off until the late 70s. He spent most of the decade in New York City, where he was living recklessly and feeding on/killing many people. Stefan got word of his brother's behavior in Mystic Falls, and sent Lexi to save him. For six months, she tried to get him to flip his switch back on by partying with him and getting him to enjoy life again. After a while, Damon admitted that he had turned his humanity switch back on as a result of him developing feelings for her. Lexi, having grown fond of Damon, ended up having a night of wild sex with him. However, it turned out that Damon had lied about having feelings for her, and only pretended to in order to get her off his back regarding his bad behavior. Before dawn, Damon had barricaded the club's rooftop exit so that she couldn't get back inside and would burn when the sun rose, since she didn't have a daylight ring. As she cowered in the doorway to avoid the sunlight, he made it clear that he didn't care about her, need her, or want her around to help him, before leaving her alone on the rooftop.

It was confirmed in Because the Night by Damon that he had succeeded in avoiding Lexi for several decades until 162 Candles, when she paid a visit to Stefan for his birthday. According to him, all the guilt he felt for how he treated her came rushing back all at once. In the end, he killed a boy at the Grill, and compelled the boy's girlfriend into identifying Lexi to the Sheriff as the vampire who attacked her. Damon then staked her in front of the Sheriff to prevent the Council from figuring out that he and his brother, Stefan were the vampires in town, as well as to gain their trust in order to infiltrate their organization.

As Lexi died, her last words were "Why?" in a betrayed tone, to which Damon replied "It's part of the plan."

In Home, when Lexi had the chance to come back to life from the Other Side, she gave it up for Damon, as she didn't want to be a horrible friend for coming back before her best friend Stefan's brother.

Damon: It's all part of the plan. (Before driving a stake through her heart) 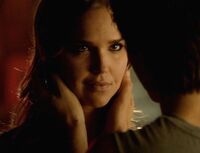 Retrieved from "https://vampirediaries.fandom.com/wiki/Damon_and_Lexi?oldid=2780581"
Community content is available under CC-BY-SA unless otherwise noted.