It has been suggested that this article be merged with Damon Salvatore/Relationships. If you disagree, leave a message here.

Former Friends, Former Allies, Former Enemies; Kissed, Sexual; Sage taught him how to be the vampire he is today, Sage betrayed Damon by siding with Finn.

The relationship between the vampires, Damon Salvatore and Sage.

Damon Salvatore watches a boxing match where a woman was beating up her opponent badly. After Sage knocks out her opponent, she walks over to Damon and asks for his name; however, Damon claims that he is not interested. She gives him some money, putting it in his pants and walks off.

In the episode 1912, Stefan tells Damon that Sage could be the killer, but it turns out that it is Samantha. Damon remembers how great sex with Sage was.

In Break On Through, Sage comes to Mystic Falls (in the present day) and helps Damon discover the secret of Rebekah by tricking her and having sex with her. This was so Rebekah would feel comfortable and Sage would read her thoughts more easily. Sage discovers the intentions of Damon and she betrays him to save Finn. Sage tells Rebekah that the Wickery Bridge was built with the White Oak and Rebekah burned down the bridge in an attempt to prevent the wood from her being used as stakes against her family. When Damon Salvatore leaves, he grabs the Wickery Bridge sign and tells Stefan that it is made of wood from the White Oak Tree, giving them the chance to kill The Originals once and for all. But they fail, as Klaus, Rebekah and Elijah are still alive.

Damon: "Sage showed me how to have a good time"
Sage: (To Damon) "A woman isn't just for food, she's for pleasure" 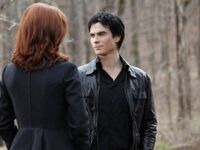 Sage in the Salvatore Boarding House 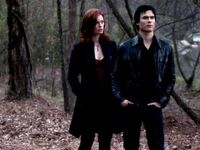 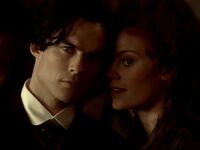 Retrieved from "https://vampirediaries.fandom.com/wiki/Damon_and_Sage?oldid=2778479"
Community content is available under CC-BY-SA unless otherwise noted.