SOME ENCHANTED EVENING — Elena is surprised to receive an invitation to a formal ball, and when Damon and Stefan hear the party is being hosted at Klaus' newly renovated mansion, they both insist on attending the event with her. Caroline and Matt also receive invitations to the ball from unexpected admirers. At the elegant party, Elena learns of a horrifying plan that could lead to numerous deaths and she must decide who she can trust with her new information. Caroline discovers a side of Klaus no one would have suspected. Finally, after an evening of violence and dashed hopes, Damon finds a new way to cope.

Alaric spends the night in the hospital for observation. Bonnie and her mom are ok. Someone watches Elena with Matt. He says goodnight and drives off. Elena gets in her car and backs up, but stops when she hits something. She gets out. Rebekah grabs her, angry about Elena staking her through the back yet Elijah intervenes between them. Back at the house, Elena tells Damon and Stefan that Esther was the one in the locked coffin.

She doesn't want Klaus dead. Elijah promises Elena his family wouldn't hurt any of them. She believes him. The doorbell rings. Elena finds a hand addressed invitation to join the "Mikaelson Family" for dancing, drinks and celebration. It's the Originals. There's a note on the back of the invitation: "Elena, I think it's time that we finally meet, Esther." Rebekah and Kol prepare for the dance when Klaus comes home, angry that Rebekah went after Elena.

His mom intervenes, essentially telling him to go easy on his family. She had 1,000 years on the Other Side to make peace with what he did. She tells him the ball will be a "magical" evening. Stefan thinks there's more to the situation than a family reunion. Elena wants to find out what Esther wants. Damon insists on going to the ball with her. Caroline gets a voice mail from Tyler, who says he freaked out and left. He tells her he's out doing what her dad said and is trying to "fix" himself and then come home to her. Caroline answers the knock at her door. She has received an invitation and a ball gown in a box. The note on her invite says "Save me a dance, Klaus." At the Grill, Elena wants Caroline to go to the ball with her, saying she can't handle the Salvatore drama. Caroline is hurt she had to hear from Bonnie about Elena kissing Damon.

Rebekah interrupts and they watch with irritation as she hands Matt an invitation to the ball. At the ball, Carol defends befriending the Mikaelsons in the name of town peace. Damon is distracted when Elena arrives looking radiant in her ball gown. Both Salvatores are there. Still at home, Caroline looks in her closet for something other than the dress Klaus gave her to wear. She gives up and puts it on. At the ball, Klaus approves. Finn chats up Elena. If she wants to see his mother, it'll have to be alone. Elijah calls everyone's attention by announcing a waltz in the other room. Damon tries to stop Elena from going to see Esther alone, instead inviting her to dance. Stefan watches. They waltz, Caroline with Klaus, Matt with Rebekah. Caroline stops Klaus from talking about her dad. Instead, he compliments her on her dress and dancing. Stefan cuts in with Elena. Elena whispers to Stefan she wants to talk him alone. Outside, she says Damon won't let her near Esther. She needs to know if Esther is secretly on their side. She knows there's nothing more Stefan cares about than killing Klaus. She asks him to intervene. Inside, Rebekah tells her brother she only invited Matt to kill him, to punish Elena. She wants Kol's help. He's up for going against their mother.

Damon responds to Elena's text and meets her in the study. Stefan swoops in and snaps his neck, then tells her to hurry — Damon won't be out for long. Elena goes to find Esther. Elijah intercepts, telling her he's suspicious about his mother saying she's forgiven Klaus. Elena promises to tell Elijah what she says. In a private room, Finn sharpens a dagger. Esther prepares incense. Elena knocks. Esther excuses Finn, then explains the incense is sage she's spelled so no one will hear them. Esther explains the witch Ayana preserved her body. Bonnie and her mom could open the coffin because they're Ayana's descendants. Esther says there's a way to undo the evil she created. "You're going to help us kill Klaus, aren't you?" "One thing at a time, Elena. For now, I simply need your help," Esther says.

Klaus finds Caroline outside with the horse and carriage. He tells her he likes her. She says she's spoken for. He tells her horses are more loyal than people. His father hunted him for 1,000 years and the closest he got was when he killed Klaus's favorite horse. Esther tells Elena about turning her children into vampires to protect them from the werewolves, but how they turned and began feeding on people. Elena asks again how to kill Klaus. Esther says it'll take time, and Elena's help. Esther says the purpose of the ball was to gather all her children together. She needs a drop of Elena's blood for the champagne toast. Elena lets her prick her finger. Esther warns Elijah will be the most suspicious. If they all drink from the toast, they'll be linked. If one dies, they all die. "I love my family, but they are an abomination. I betrayed nature when I created them, it's my duty to kill them," Esther says. Kol is ready for some killing. Rebekah tells him to be patient. Damon comes back to life angry. Stefan tells Damon his emotions are getting in the way of their plan. Matt strolls outside with Rebekah. He lends her his coat. She's touched. She wants to go back inside.

Elena tells Elijah his mother really has forgiven Klaus. Elijah takes the champagne toast. Esther makes the toast. All the Mikaelson kids drink. Klaus shows Caroline a Monet he stole. The bracelet he gave her once belonged to a princess. She notices his sketches. He brags, offering to show her the world. She asks why he needs his hybrid servant army and asks why he doesn't give Tyler his life back. Klaus has had enough and tells her to go. Caroline lectures him, telling him it's clear because his father didn't love him, he doesn't try to connect with anyone, just compelling them or siring them instead.

But that's not how it works. She takes off the bracelet and leaves it. Rebekah tells Kol she changed her mind about Matt, saying she doesn't want to ruin their mother's night. Kol is irritated. Damon tries to manhandle Elena to leave. She tells him she's worried he'd try to be a hero and ruin everything. He tells her he loves her. She says that might be part of the problem. Caroline comes looking for Matt. Kol lures him outside and squeezes his hand.

Damon finds them and intervenes. He throws Kol off the balcony and beats on him. Everyone runs out and Stefan asks if he's crazy. He just might be, Damon says, looking at Elena. Caroline leaves Tyler a message, saying she's grateful for what he's doing, but she wishes he was there. She sees a present on her bed. She's irritated, but opens it and sees it's a sketch of her with the horse. There's a note from Klaus, thanking her for her honesty. Elijah promises his mother he'll deal with Rebekah and Kol. She wishes her other kids were more like him.

Elijah leaves. Finn checks his mother's not losing her will. He knows about the spell binding them and says when it's time, he'll be ready to die. Esther writes her children's names on a piece of paper, slices Finn's hand and lets the blood run over the paper to each of their names. The link is complete. Stefan escorts Elena home. She feels guilty about lying to Elijah. Stefan thinks the rest are just collateral damage to Klaus. Stefan asks why Damon went after Kol and she says she said something she didn't mean. Stefan says he did, too.

Elena asks how he acts like he doesn't care. He feels awful for biting her, but she tells him showing any emotion would be better than pretending he doesn't care. He says if he cares, all he feels is pain. Rebekah tries to buy Matt an apology drink at the Grill, saying Kol is a lunatic. Matt calls her pretty and fun, but tells her he wants to be left alone with his broken fingers. Damon slides up and pours them shots. He suggests she would have broken Matt in a second and she should find someone more durable. He has a suggestion. Cut to them making out ferociously and ripping each other's clothes off.

Esther: "For a thousand years, it's been my dream that this family could be as one."

Elena: "The Originals are throwing a ball. Like, an actual ball."
Caroline: "It's some twisted Cinderella fetish, that's what it is."

Stefan: "I think that there is more to this than some family reunion."

Damon: "It would be rude not to dance, y'know."

Elena: "I can't deal with either of the Salvatores right now."

Elena: (reading from card) "'Please join the Mikaelson family this evening at seven o'clock for dancing, cocktails and celebration...'"
Stefan: "Who the hell are the Mikaelsons?"
Elena: "The Original family."
Damon: "It's not bad enough they're moving into town, now they want a housewarming gift?"

Esther: "It's going to be a magical evening."

Klaus: "You went after Elena? What is wrong with you?"
Rebekah: "Here we go."
Klaus: "Do you want another dagger in your heart?"
Kol: "Again with the dagger threats? Don't you have any other tricks?"
Klaus: "Oh, go back to staring at yourself."
Kol: "And who are you? My father?"
Klaus: "No, Kol. But you're in my house."
Kol: "Then perhaps we should go outside."

Elena: "I'm not leaving until I know what Esther wants."

Caroline: "What are you doing here with the she-devil?"

Rebekah: "Hi. What are you doing?"
Matt: "Well, let's see. I, I went to a dance and got my hand crushed, found out that I don't have health insurance, so I just needed a minute to myself."
Rebekah: "Well, I thought maybe I'd buy you an apology drink."
Matt: "Maybe you could just leave me alone."
Rebekah: "Look, I'm, I'm really sorry about Kol. He's a lunatic."
Matt: "Look, Rebekah, you're really fun and pretty and all... but I really need you to leave me alone."

Damon: (to Rebekah) "Burn. Rejected by the captain of the football team. Welcome to adolescence."

Damon: "You would've broken him in a second."
Rebekah: "Are you suggesting that I can't be gentle?"
Damon: " Nope. Just that you should be with someone more durable."
Rebekah: (smirks) " And who would that be?" 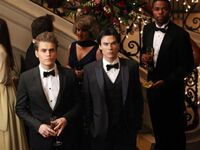 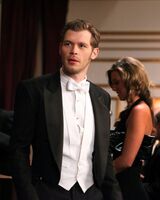 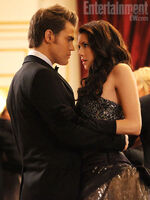 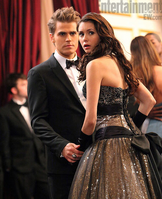 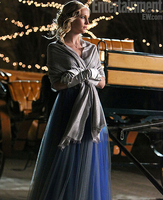 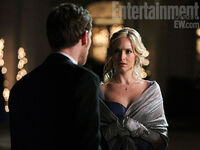 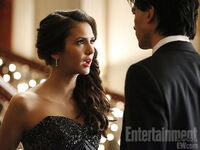 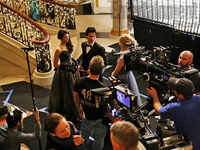 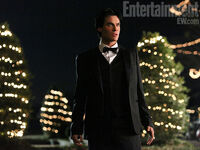 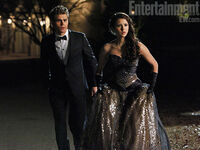 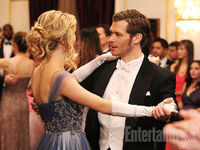 Esther in a dress 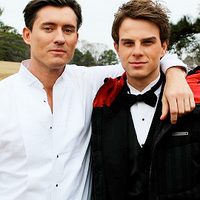 Finn got a hair cut for the ball 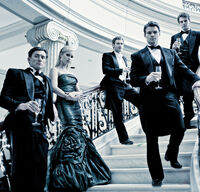 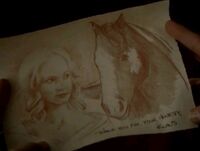 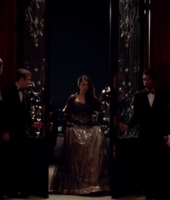 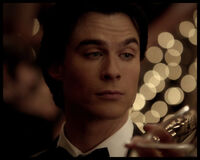 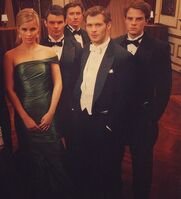 Retrieved from "https://vampirediaries.fandom.com/wiki/Dangerous_Liaisons?oldid=2785666"
Community content is available under CC-BY-SA unless otherwise noted.