David Anders Holt (born March 11, 1981) is an American television and stage actor who played John Gilbert on The Vampire Diaries TV series. He is best known for his roles on TV series, Alias as Julian Sark and Heroes, as Adam Monroe. Although Anders is American, both of these noted roles required him to use a British Home counties accent.

Anders was born on March 11, 1981 in Grants Pass, Oregon. He is the son of Dr. Tony and Jeri Holt. He has three siblings; his biological brother Arik, his adopted brother Jason and adopted sister Maili. Anders began acting in school plays at a young age but spent most of high school playing sports such as basketball and tennis. When he was a senior in high school, at 17, he played Philip the Apostle in a regional theater production of Jesus Christ Superstar. When he was 18 Anders won the part of George in his high school's production of Our Town; following that, he went on to portray Freddy Eynsford-Hill in a production of My Fair Lady. David played Philip the Apostle in a regional theater production of Jesus Christ Superstar when he was 17. He was accepted at the American Academy of Dramatic Arts in Pasadena, California, but decided to head to Los Angeles instead. After moving to Los Angeles, he took the stage name of David Anders due to another actor using the name David Holt. In 2001 Anders took a role playing a high school senior in the Olsen twins' series So Little Time. Later in 2001 Anders landed the role of Julian Sark in Alias; originally a guest star, Anders was made a regular and lasted until 2006. Before his acting debut in Alias, Anders worked at The Gap and taught tennis. Between 2001 and 2006 while working on Alias Anders made guest appearances on television shows such as Charmed, CSI and Grey's Anatomy, worked on an independent film, and was involved in several plays. In 2002 Anders played in the independent film, The Surge. In December 2001 he appeared in The Source magazine in an ad for the rapper Canibus, in which Anders doubles as Eminem. In 2005 Anders joined the cast of Beautiful, an Off-Broadway rock musical, as the lead. Beautiful was shown during the New York International Fringe Festival. In the same year he participated in the film Circadian Rhythm. In 2006 Anders worked on the horror film Left in Darkness alongside actress Monica Keena. In 2007 Anders played the role of ELI in the film of the same name, ELI. He went on to be cast in a regular role in the second season of NBC's hit Heroes as Adam Monroe/Takezo Kensei, a new character with the ability to regenerate. Anders was once again asked to use his British accent from Alias, despite being an American actor. He is also working in two other movies; Into the Blue 2: The Reef and The Revenant. He recently joined the eighth season of 24. Anders has guest starred in the TV series The Vampire Diaries in 2010 as John Gilbert. As of late 2011, Anders has a recurring role on ABC's Once Upon A Time. On stage Anders has played the lead role in the world premiere of Rockne: The Musical. He also appeared in The Diary of Anne Frank, in 2001, which received an award for Best Ensemble performance at the Back Stage West Garland Awards.

In 2006, David became a part of Alias (and in 2007 Heroes) co-star Greg Grunberg's band, Band From TV. He sings main vocals alongside Bonnie Somerville. Other than Grunberg, Hugh Laurie (House) on keyboards and James Denton (Desperate Housewives) on guitar will be a part of the project. The band's main goal is to raise money for major charities. According to Grunberg they "charge an incredible amount of money to play corporate events, but if it's all going to charity, then it's worth every dime". 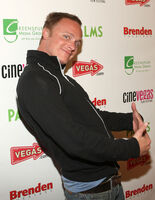 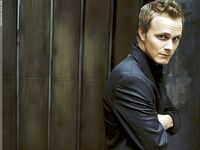 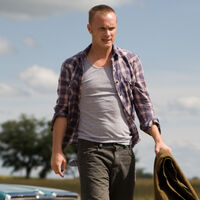 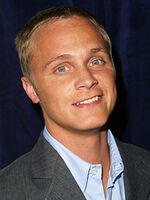 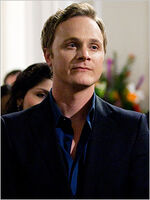 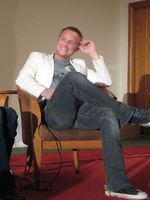 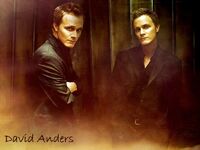 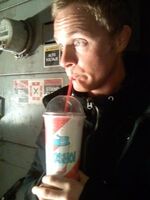 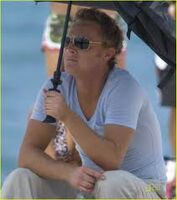 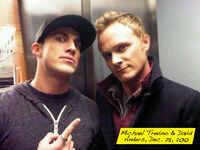 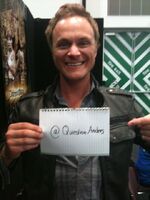 David Anders in Once Upon A Time as Dr. Whale 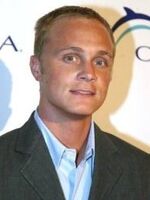 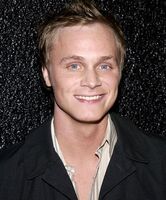 Retrieved from "https://vampirediaries.fandom.com/wiki/David_Anders?oldid=2780586"
Community content is available under CC-BY-SA unless otherwise noted.