It has been suggested that this article be merged with Davina/Cami/Relatonships. If you disagree, leave a message here.

Friends, Former Allies; They worked together to stop outside enemies from hurting their friends, They cared about each other, Davina freed Cami from Klaus' compulsion, Davina attempted to save Camille's life.

The relationship between the witch, Davina Claire and the vampire, Camille O'Connell.

In Girl in New Orleans, Marcel asks Cami to help look after Davina while she attends the Dauphine Street Music Festival. Cami, at first, declines, but Klaus compels her change her mind so that she can spy on Marcel and Davina for him. They bond during this and Cami helps Davina reconnect with her former friend Tim.

In Reigning Pain in New Orleans, Davina goes to Cami for help as she felt that she couldn't trust Marcel anymore. When Cami fails to recognize her, Davina deduces that Cami has been compelled. She then tells Cami that she can fix her, but that it will hurt. Davina begins and Cami starts to hurt and scream.

In The Casket Girls, Davina continues to undo Klaus' compulsion on Cami. Afterwards, Davina senses that someone is using magic to find her and Cami tries to help her escape from the Quater. When Cami suggest that they go to her uncle for help, she is shocked when Davina tells her that Kieran is aware of the supernatural and has been hiding it from her. Later, at St. Anne's Church, they get a call from Josh telling them that Klaus has Davina's friend Timothy and that he'll kill him if Davina doesn't come to the compound. Davina then senses that the witches have found them just before they enter the sanctuary and start chanting. Cami tries to shield Davina and gets knocked unconscious. Angry at this, Davina magically lifts the witches in the air, snaps their necks, and lets them fall to the ground. After checking to make sure that Cami is all right, Davina heads off to face Klaus. Later, Cami sees Klaus and warns him that if he ever hurts Davina or Josh, she will expose him to the world.

In Dance Back from the Grave, Camille is visited by a mourning Marcel and learns that Davina was sacrificed.

In Farewell to Storyville, Camille is reunited with Davina whom is visibly shaken by her past death. Cami tries to help, but Davina is cynical, aware that Cami wants something from her. Cami admits it and tells her about Kirean's hex. Davina informs she cannot help her. Later Marcel informs Cami that Davina needs to be sent back to her former coven and she expresses concern over this while Davina is sleeping on her bed.

In From a Cradle to a Grave, Davina accompanies Marcel and Camille to a storage room where Kieran had stored many dark objects and other tools that he could use as weapons against the supernatural. Recognizing several objects as having been spelled by witches, Davina takes some to use in her ritual to revive Mikael.

In Live and Let Die, Cami calls Davina and asks her where she had gone to. Davina tells her that things are complicated, tells her that she is happy to hear her voice and hangs up. Klaus listens in on a phone call between them and when Cami is off the phone, He informs her that Davina brought back his father from the dead. Cami realizes that this the reason Davina fled the city and she points out to Klaus that his actions towards Davina made her more willing to bring back Mikeal. Klaus promises Cami he wont kill Davina now and after he leaves. Cami frantically texts a warning to Davina that Klaus is on his way to her cabin.

In Red Door, With Davina still knocked out unconscious Cami suggests they take her to the hosptail, but she's kidnapped by Mikeal when she goes outside. Davina along with Kol help contribute to Cami's rescue party.

In The Brothers That Care Forgot, Davina learns that Esther is the bigger problem than Klaus is when she selected Cami to be Rebekah's host and calls an ceasefire with Klaus to help her. Davina becomes very worried about her.

In The Map of Moments, Davina and Kol prepare spells to protect Cami from Esther. Just before the spell is started, Davina infoms her about what's going to happen after Esther starts the spell. After the spell is performed, Davina is seen waiting for her to wake up. When Cami regains consciousness, the two share a hug.

In Brotherhood of the Damned, They briefly talk on the phone where Davina realizes it was Finn's magic that made Klaus, Elijah with Kol passed out so that he could talk to them. They are shocked by this, not knowing what to do.

In Behind the Black Horizon, Davina pays Cami an visit to find a dark object to help her with a spell while Cami recognizes that Kol was cursed and tells Davina about it who later uses her magic to confirm the fact.

In No More Heartbreaks, Davina attempted to help save Cami from Lucien Castle's deadly bite. However, due to complications, Davina was killed by Kol Mikaelson because he could not control his bloodlust and Cami died as a result of her deadly bite.

Marcel: "It's good to see you. I was worried you thought I was some hothead after that display at the Masquerade."
Cami: "We all have our hot-headed moments! Anyway, I'm almost done here until clean-up, so the two of us girls can hang out if you need to go shmooze, or whatever."

Davina: "You know, he was supposed to stop hovering like, ten minutes ago."
Marcel: "See what I mean? Authority issues! I'll go talk to the mayor—he actually knows how to show some respect!"

Cami: "Soooo, what's his name? Hot guy with the fiddle?"
Davina: "Tim. I knew he would be here, he always performs at these kinda things."
Cami: "How long have you two known each other?"
Davina: "Since we were ten. I had to leave school, and I didn't get to say goodbye. So, I was just hoping to talk to him tonight."

Davina: "I'm sorry, Cami. It's the only way to break Klaus' compulsion."
Josh: "Believe me, I know what it's like. You're okay. And hey—all these notes that you made? It's very Momento of you. Nice work."
Cami: "We've been at this all night. I don't understand what's happening to me, I don't understand any of this—"
Davina: "But you will. I will unlock every stolen memory, undo every piece of mind control that any vampire has ever done to you. When I'm done, you will understand all of it, and you'll be free. I can stop, if you want me to."
Cami: "No, don't stop. I want to remember everything."
Davina: "You should start to feel, like, a weight lifting."
Cami: "I remember why I wrote this. I found a picture of Klaus and Marcel from 1919. Klaus compelled me to go out with Marcel, to spy on him. That's what he said yesterday, before he told me to forget. I'm remembering."
Davina: "Let's take you back more."

Davina: "Keep drinking. You need the vervain in your system so you can't be compelled again."

Cami: "Davina?"
Davina: "Someone's practicing magic. They're trying to find me."
Cami: "Then we have to run."
Davina: "There is no way to sneak me out of the Quarter. By now, everyone's looking for me– the witches, Marcel, Klaus."
Cami: "My uncle will know what to do."
Davina: "Cami..."
Cami: "I mean, he has to know some of what's going on in this town, right?"
Davina: "Cami, stop—"
Cami: "Unless he's been compelled..."
Davina: "He knows."
Cami: "What are you talking about?"
Davina: "He knows. He works with Marcel. They're practically friends. I hear them talk. He knows everything."
Cami: "No. He would've told me if he knew the witches put a hex on my brother."

Davina: "There's people everywhere."
Cami: "Just keep walking, no one knows it's you."
Davina: "Cami..."
Cami: "We have to get off this street!"

Davina: "We should keep moving. How long do we have to wait?"
Cami: "Give it a few minutes, then I'll check to see if the coast is clear."
Cami to Josh: "Josh, sorry I missed your calls."
Josh to Cami: "Look, I didn't want to tell you, but I know Klaus. If Davina doesn't show up, he'll kill Tim."
Cami to Josh: "We'll think of something. Make your way to the Quarter. Stay hidden. We'll text you when we have a plan."
Davina: "I have to go."
Cami: "Davina, wait."
Davina: "I can't let Tim die."
Cami: "What's wrong?"
Davina: "The witches."

Cami: "Davina? Marcel told me you were up here. Do you want to tell me what happened?"
Davina: "I died. And at first, I was alone, but then I heard them. Voices, whispering to me."
Cami: "Who?"
Davina: "The ancestors. They're so angry with me. I used my power against my own, and they said they'd do horrible things to me if I misuse my magic again."

Cami: "I've studied the effects of trauma and abuse. The witches that forced you into that ritual, they've lied to you. They hurt you."
Davina: "Cami There's nothing you've studied in some book that can help me."
Cami: "Okay, forget the books. Let me tell you what I know from experience. When my brother died, I never thought I'd be okay again. I cried for weeks. I blamed myself. I blamed him, and then I realized all that... sadness was swallowing me up. And I made a choice. I wasn't going to let it. You can make that choice, Davina."
Davina: "You say that like it's so simple, but the witches aren't just gonna let me go. They're not done with me."
Cami: "No one can control you unless you let them."
Davina: "How do I even know who to trust? Should I trust Marcel? The first thing he did when I came back was try to use me again to help Rebekah. Be honest, Cami. Isn't there something you want, too?"
Cami: "Yeah. My uncle is sick. I thought you could help him. That's not why I'm here. I care about you. I want to help you."
Davina: "What can you do? When I came back, the voices I heard, they said the only ones who could help me are the witches. But, after what I did to them, they hate me. So, how can I go back and ask for their help now?"

Cami: "Finally, you pick up your phone. I've been trying to get a hold of you for days. Way to leave a girl hanging."
Davina: "I know, I should have called you back. I didn't want you to worry. I just... things are complicated."
Cami: "Yeah, well, word on the streets—and, by streets, I mean Josh--is that you've gone totally M.I.A. Seriously, are you okay? Where are you?"
Davina: "I'm fine. I'll be back soon, I promise. And... thanks for calling. It's good to hear your voice."
Cami: "Davina? Davina?"

-- Brotherhood of the Damned

--Behind the Black Horizon 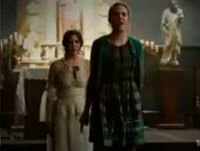 Retrieved from "https://vampirediaries.fandom.com/wiki/Davina_and_Camille?oldid=2766857"
Community content is available under CC-BY-SA unless otherwise noted.