Dean was a character who appeared in the fifth episode of the fourth season of The Vampire Diaries. He was a werewolf, who was turned into a hybrid by Klaus and was killed by Connor.

When Connor takes Jeremy, Matt & April as hostages in the Mystic Grill, Stefan asks the support of Hybrids from Klaus. Therefore Dean will be sent by Klaus to Connor. But Klaus orders Dean specifically not to kill Connor. Apparently Dean is a friend of Hayley whom she mentioned before. Tyler argues with Dean not to do what Klaus says since Connor can easily kill Dean. Hayley also says not to listen. But Dean says that Hayley is not a Hybrid and she doesn't know what will happen if he doesn't do Klaus' demands.

Then Tyler explains to Dean about himself and breaking the sire bond. But Dean challenges Tyler to go against Klaus and Tyler takes a call from Klaus who is in Italy. Klaus threatened Tyler that he will tell Tyler's secret about Hayley to Caroline. Then Tyler backs down and says Dean to do whatever he wishes. So Dean enters the Mystic Grill and gets into a bomb set by Connor. Finally, Connor shoots the injured Dean and kills him.

Because Dean was sired by Klaus, his personality was a mystery. Dean shows his contempt for his life as a werewolf, however, Hayley, and Tyler try to protect him, to go help Stefan against Connor, demonstrating that he had a friendly, loyal and honest personality.

Dean was handsome, tall and had an athletic build. He had off shot straight brown hair, and blue eyes.

Dean possessed all the standard powers and abilities of a non-Original werewolf-vampire hybrid.

Dean had the typical weaknesses of a non-Original werewolf-vampire hybrid. 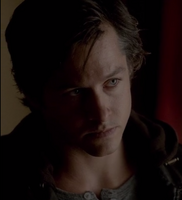 Retrieved from "https://vampirediaries.fandom.com/wiki/Dean?oldid=2766869"
Community content is available under CC-BY-SA unless otherwise noted.