REMEMBRANCE DAY — As Hope hit the books to learn more about the latest creature to arrive to the school, things take a dark and twisted turn leaving her to confront one of her darkest fears. Meanwhile, Alaric attempts to help Rafael cope after his past comes back to haunt him. MG also appears.[3]

The episode opens on remembrance day, an annual thing at the Salvatore Boarding School for the Young & Gifted wherein the students and staff remember those that they have lost over the years. Rafael is writing a letter to his deceased girlfriend, Cassie, as Hope narrates explaining the tradition of scattering the letters throughout the cemetery. Hope explains that she doesn't see the point in writing to the dead, and Rafael is surprised when Cassie comes walking through the halls of the school.

Alaric and Rafael question Cassie and what she remembers about the time prior to her death — although she is unaware of what happened or that she was dead. She explains that she remembers driving home and then darkness, before hearing a voice telling her to wake up. Alaric tells her that her memories are from two months ago as she died in the car accident, but has been resurrected from the dead.

After speaking with Dorian, Hope goes to speak with the Necromancer, who tells her that she smells of death. Hope reveals to the Necromancer that he no longer exists, but has been pulled from Malivore to search for the knife. The Necromancer laughs at the idea that the dragon and arachne are fairy tales, but is shocked to learn that he too is also a fairy tale. This infuriates the Necromancer, who questions who is responsible for making him disappear from history, and Hope asks him to help her figure that out; a notion to which he agrees. Hope questions who is communicating with the Necromancer, however he admits that there is nobody communicating with him, but he has instincts. The Necromancer reveals that he knows if he returns the knife to Malivore then he will be free of the eternal darkness.

Meanwhile, in Alaric's office, Cassie attempts to call her parents, before being interrupted by Alaric, who tells her that it isn't such a good idea. She tells Rafael that she wants to get to the bottom of how he killed her, despite it being an accident.

Back in the werewolf transition space — where the Necromancer is being held captive — he explains to Hope his history and what he remembers before dying. He explains, but then tells her that he doesn't know who killed him, but can find out with Hope's help and a powerful vampire. In the gym, MG is working out with Kaleb before they are interrupted by Hope, who asks if he is willing to help with a head dive. He agrees, despite having never done one before or not knowing how. Hope tells him to keep this from Alaric.

Rafael and Alaric talk about the Necromancer and Cassie. Rafael asks if it is possible for Cassie to stay alive, however Alaric tells him that when they have figured out what the Necromancer wants he is going to be stopped, and Cassie will more than likely go with him. He tells Rafael to make peace with Cassie and say goodbye.

MG is horrified by the Necromancer's appearance, comparing him to the Grim Reaper, which offends him greatly. They begin the deep dive inside his mind, which brings them to Rousseau's. Hope is confused as to why they are in New Orleans, with the Necromancer revealing that Klaus was good for business. The Necromancer admits that Hope only wants to know where her father is and whether he found peace. However he tells her that he will not reveal anything until they figure out who killed him. With this, the Necromancer jumps deeper into his mind, leaving Hope alone inside his mind, however she is pulled out by MG not long after. MG sends Hope back inside the Necromancer's mind, despite his dismay. She arrives yet again in New Orleans, but the Necromancer is nowhere to be seen. She descends a series of stairs, however into total darkness after hearing his laugh.

Rafael apologizes to Cassie for his part in the accident, however she insists that it wasn't an accident. She reveals that she has began remembering things, including that he took the turn (that killed her) too fast for a reason, however he refuses to admit it and furiously leaves the room. In the courtyard, Rafael reveals to Alaric that he now remembers that he picked a fight with Cassie because he thought she was flirting with another guy, which led to him taking the turn too fast, and the crash which killed her.

Meanwhile Hope is trapped in the endless darkness within the Necromancer's mind. She tries to tell him that she has come to terms with her father's death, she did want answers but no longer does. She begins to call for MG, however her attempts are futile and she is unable to escape, which leads to MG seeking Alaric for help.

By the lake, Rafael apologises again, admitting that he knows what happened. However Cassie admits that she doesn't want to punish him, just for him to come to terms with the accident. She forgives him, telling him he has a lot of work to do on himself, and she asks to be alone in the sun for a while.

Hope admits that she still wants to know her father's fate, as her family said he died with love in his heart and should have found peace, but she is not sure and wants to know that he is not alone. This gets the Necromancer's attention, who appears before her, pulling her from the darkness and back into reality. MG is clearly ashamed that he could not pull Hope out of the darkness, and seeks out Kaleb's help, telling him that he wants to be strong — even if he has to consume human blood to do so; a clear violation of the school's policies. In his office, Alaric is furious at Hope for taking matters into her own hands as he has it under control, however she points out the copious amounts of alcohol in his office, asking for an explanation. He warns Hope that the Necromancer could torment her with her dead family, or all of the people she killed in-between, which upsets her, and she warns that he should not be disappointed as he is not her father. The Necromancer reveals that he has found out that the knife was the thing to kill him, and now it is the thing he seeks. He reveals that the purpose of Malivore is to wipe the supernatural scourge off the Earth.

Kaleb shows MG how to feed on humans, including the Salvatore method of "snatch, eat, erase". MG is at first reluctant, but eventually finds enjoyment on feeding on a human, before they are interrupted by a furious Dorian Williams, who tranquillises MG with vervain to stop him feeding on the man.

Meanwhile, the Necromancer admits to Hope that he was stalling her long enough to allow Cassie to steal the supernatural knife, and is now stalling her whilst a Bennett witch returns to knife to Malivore using magic. He reveals that Klaus died with love in his heart and doesn't regret his choice, but has not and will not find peace until she does. With this, and the knife returned to Malivore, the Necromancer is freed from his duties, presumably returning to the dead.

Kaleb is lectured by Dorian over allowing MG to consume human blood. He points out that young, impressionable vampires like MG are susceptible to becoming rippers. He reveals that his father and little sister were murdered by Stefan Salvatore whilst he was a ripper.

Hope writes her letter to her father, admitting that she messed up, and he would be disappointed. She hopes that him never finding peace is a lie, but if it is true then she will do better, as she does not want to be alone. She writes that she is glad he is with her, but will look forward to the day he is not, as he will have found peace. As she is leaving the cemetery with Rafael, the bracelet she is wearing glows, signalling that Landon is in trouble.

Alaric: "Let's see how this feels."
The Necromancer: "Was that really necessary?"

Hope (to the Necromancer): "I thought maybe we could talk."

The Necromancer: "You want to take a walk through my subconscious? Just not sure you're quite tall enough to ride the scary rides."

"Walk With You" – Janelle Kroll

Legacies Death Keeps Knocking On My Door Scene The CW

Legacies Death Keeps Knocking On My Door Scene 2 The CW

Legacies Inside Legacies Death Keeps Knocking On My Door The CW 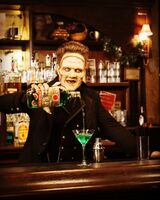 Retrieved from "https://vampirediaries.fandom.com/wiki/Death_Keeps_Knocking_On_My_Door?oldid=2785527"
Community content is available under CC-BY-SA unless otherwise noted.