Diego was a major recurring character of The Originals. He first appeared in the twentieth episode of the fourth season in The Vampire Diaries and in the first episode of the first season in The Originals. Diego was a vampire who was sired by Marcel Gerard. He was one of the members of Marcel's inner circle who gained daylight rings upon entry, and functioned as a member of Marcel's army. He was loyal to Marcel and many of his fellow high-ranking vampires, including Thierry Vanchure. Just like Thierry, Diego did not like or trust the Original vampires.

As of Moon Over Bourbon Street, Diego had become the leader of the vampires remaining in New Orleans after Elijah revoked their privileges in the Mikaelson compound. However, after the death of his friend Thierry, he agrees to join Marcel in his plan to overthrow the Originals from their place of power in the city.

Diego is mortally injured by the Guerrera werewolves after he and his vampires confront the Originals under Marcel's leadership. Although Marcel tries to find a way to save his friends from the bite of the werewolf, Diego and the other surviving vampires are killed by the resurrected Mikael, the vampire who hunts vampires.

According to Diego, he and his family were attacked by werewolves, and he watched his sister die in front of him from the wounds she sustained in the attack. Diego only survived because Marcel found him and turned him into a vampire before he could die naturally. From then on, Diego felt an intense hatred toward werewolves.

In The Originals, Diego seemed to be one of Marcel's closest associates, as Marcel came to his rescue when Klaus had lashed out at him. He stated that he only answered to Marcel, and his loyalty to Marcel was so strong that he dared to talk back to Klaus of all people, after Klaus approached him and demanded Marcel's whereabouts. Klaus was so angered by Diego's disrespectful behavior that he grabbed him in a choke-hold until Marcel finally arrived and stepped in to break up their confrontation, insisting to Klaus that Diego was just looking out for him.

Little was known about Diego's personality, but from what has been seen, he was incredibly loyal to Marcel. He also seemed to be very close friends with Thierry Vanchure, as he was indignant towards Marcel on Thierry's behalf when Marcel sent him to the Garden. He apparently had an intense hatred for werewolves, as his entire human family faced tragedy at their hands before he was turned into a vampire by Marcel. His transition into being a vampire seemed to only exaggerate this hatred, as vampires and werewolves have been natural enemies for over a millenia.

Diego had creamy brown skin, dark brown curly hair, and brown eyes. He had a very rocker-ish style, much like most of the vampires in New Orleans.

Diego possessed all the standard powers and abilities of a non-original vampire.

Diego had the typical weaknesses of a non-Original vampire.

Diego seemed to be loyal to Marcel and was a close friend and associate of his. He was loyal enough that Marcel gave him a daylight ring, which are only reserved for his inner circle, and he was willing to stand up to Klaus for him. However, he seemed to be angered by Marcel's treatment of Thierry after he was sent to the Garden. After Marcel lost his battle with Klaus in The River in Reverse and picked up the coin, Diego lost respect in Marcel, as he believed Marcel only picked the coin to save himself. In The Big Uneasy, Diego rejoined Marcel's team after coming to the conclusion that they must take the city back from the Mikaelson's control.

Based on Diego's anger at Thierry's sentence and the anger he expressed towards Marcel, it can be presumed that the two of them were close. He was also extremely saddened when he was killed, drinking for him at his impromptu funeral.

Diego did not seem to harbor any true ill will against the Mikaelson Family (though he, like many vampires in the Quarter, seemed to distrust them and often acted arrogantly around them). However, he rarely showed them any outward support unless it was to help solidify his own role as a leader of the vampires. Though he later became compliant to Klaus and Elijah's rule, he expressed a desire to see them leave New Orleans on several occasions.

Diego healing a human he has fed on 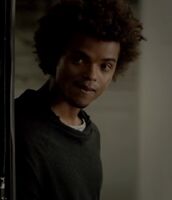 Diego coming to tell Marcel about Thierry killing a vampire. 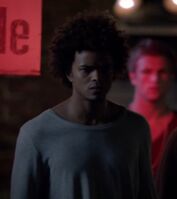 Diego getting mad at Josh. 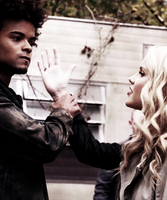 Marcel asking Diego to at least act loyal to Klaus.

Diego hunting werewolves in the bayou. 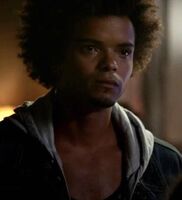 Retrieved from "https://vampirediaries.fandom.com/wiki/Diego?oldid=2778419"
Community content is available under CC-BY-SA unless otherwise noted.