FAMILY TIES — Still in Chicago, Klaus uses Gloria, who is a witch he knew long ago, to help him track down missing information that will explain why his plan isn't working. Gloria's spells reveal intriguing glimpses of the truth, but she soon realizes she needs Stefan's knowledge to complete the puzzle. When Stefan suddenly finds himself in danger, help comes from a surprising ally. Back in Mystic Falls, a frustrating new enemy pushes Damon over the brink and he lashes out in a way that will have lasting consequences. Caroline struggles with her own emotional issues, even as she tries to help Elena face her feelings. Jeremy makes a brief, but disturbing breakthrough with one of his ghostly visitors, leaving him more confused than ever. Finally, Bonnie has a strange encounter that will affect everyone.

The episode opens in Chicago where Stefan and Klaus are shopping with Rebekah for some 21st century clothing. Stefan steps outside for some air and sees Katherine waiting for him. He decides to go over to her and see what she wants and Katherine asks Stefan to tell her what he is planning. Stefan tells her that he has it under control and doesn't tell her anything else. Katherine warns Stefan to be careful as Klaus is smarter than him and will always be one step ahead.

Back in Mystic Falls, Elena and Damon are making chili for the founders party when Alaric walks in and notices that something must be going on between them. Upstairs Jeremy wakes up to find Anna lying next to him. Surprised, he jumps out of his bed and she asks him if he can hear her. Jeremy replies yes and Anna reveals that she has been trying to contact him for days. He says that he was dreaming about her and then Anna says that she can only appear to him when he's thinking about her.

Caroline shows up at the Gilbert house with Bonnie who has been with her dad's family during the summer vacation. She hugs Jeremy while he sees Anna in the mirror.

Sheriff Forbes brings Damon to where she is keeping Bill and asks him to check whether Bill has vervain in his system. Damon asks Bill why he thinks that he can control the basic instincts of a vampire and Bill replies that the mind is a powerful thing. Damon bites Bill and then compels him to leave town since he doesn't have vervain in his system.

Back in Chicago, Gloria is casting a spell to find the location of the necklace. At Elena's house, she is in the kitchen with Bonnie and Caroline when all of a sudden the necklace burns Elena's chest. Back with Gloria, she says that she saw a girl with her friends and Rebekah says that they will be a dead girl and dead friends if she doesn't get the necklace. Gloria tells Stefan, Klaus and Rebekah that she needs time and space and they head off to get lunch.

At the Founder's party, Bonnie brings her Grimoire to Elena and Caroline so they can find out what happened with the necklace. While Bonnie's researching, Caroline asks Elena if she is "switching Salvatores". Elena denies this and says that she and Damon are just friends. Bonnie interrupts them as the necklace has begun to start levitating on its own. Alaric approaches Damon and tells him to take a "beat from Elena" and Damon gets really annoyed that Alaric is telling him what to do. Before he can do anything, Sheriff Forbes calls Damon to a Council meeting.

Jeremy finds Anna and she reveals to him that she feels darkness whenever he lets her in. She tells him that she is on The Other Side and that she is lonely being trapped there. Jeremy and Anna then touch hands and they are surprised to see that they can touch each other.

Stefan leaves Klaus and Rebekah who are feeding on girls to find Gloria and find out what she knows. Gloria says that she doesn't like Klaus and is only helping him to get the necklace for herself. She then tells him that the girls she saw were talking about him and threatens to tell Klaus that he is hiding something if he doesn't tell her the information she needs.

Stefan makes a move to attack her, but she paralyses him with magic and decides to torture him. She performs a spell to connect with Stefan's "essence" to find out information. She sees a series of images involving Elena and Stefan. This confuses Gloria a little, but then she sees Klaus sacrificing Elena and figures out that she is the Doppelgänger and that Elena is alive and that is why Klaus' hybrids aren't working. Katherine then appears and stabs a knife in Gloria's neck and helps Stefan. She asks Stefan if he wants a "partner in crime" and he tells her no.

Back in Mystic Falls, Jeremy and Bonnie are looking through Grimoires to determine what happened with the necklace. Jeremy is asking Bonnie if she could asks the witches for help and Bonnie says that the witches cut her off after she used that spell to revive Jeremy. Anna then appears to Jeremy, warning him that the darkness is here. All of a sudden, all of the books burst into flames and Bonnie uses magic to stop it. Jeremy then goes to the bathroom to tell Anna to stop showing up when Bonnie is around. Jeremy then decides to shut Anna out and goes to tell Bonnie everything. Anna is very upset when this happens and starts crying, saying that she doesn't want to be alone anymore.

When the council meeting is about to end, Bill walks in and reveals that he has trained his mind against compulsion and that Damon compulsion technique is very weak. Damon steps outside and tells Elena and Alaric that they are considering putting vervain in the towns water system.

Elena says that might be a good idea so Damon can control himself more. Alaric then steps in between them arguing and so Damon breaks his neck, knowing Alaric is wearing the Gilbert ring. Damon goes back inside to torture Bill and then Caroline shows up and starts fighting Damon. He reminds her that he is older and stronger, then Caroline reminds him that she is angrier and breaks from Damon's hold and saves her father.

The next morning Alaric wakes up and Damon tells Alaric that he killed him. Alaric is angry at this and storms out of the Salvatore house and goes to find Sheriff Forbes and Carol Lockwood, saying he wants a place in the council. They tell him that it doesn't work that way and he tells them that he knows about Caroline and Tyler and invites himself to the next meeting.

Elena and Bonnie are over having lunch at the Grill when Bonnie tells Elena that Jeremy is seeing the ghosts of Anna and Vicki. Elena is surprised at this and as Bonnie is turning away, Elena vanishes from sight, leaving Bonnie confused.

Stefan goes into the warehouse where the Original siblings are in and from what it looks like he was planning to release the daggers from their bodies. Before he can do this however, Rebekah shows up and Stefan asks her why she doesn't un-dagger them. Rebekah replies that Klaus would hunt her down and kill her. She tells Stefan that she knows about Elena dying and asks if he could ever love again. Stefan says that maybe one day he will. Rebekah then kisses him and Stefan asks her about why they were running. Rebekah says that no one is truly fearless and Stefan interrogates her more. Klaus then appears and Rebekah says that something was wrong as Stefan was asking about Micheal. Klaus seems angered by this knocks Stefan out.

Back at the Salvatore house, Elena appears at the front door. She is revealed to be Katherine and she asks Damon if he is looking for a partner in crime and shows him that she has the necklace.

Stefan wakes up in the back of a truck and sees Klaus. Stefan tries to explain, but Klaus says that he isn't mad, just curious. Klaus says that Rebekah has sharp instincts and he thought it necessary to check things out. Klaus opens the truck door and says to Stefan; "Welcome back to Mystic Falls."

Elena: "I'm just going to keep making chili, and pretend like I didn't just spend the entire summer looking for someone who didn't wanna be found."
Damon: (to Alaric) "She's in denial."
Elena: "I'm not in denial."

Rebekah: "There has to be more to this dress."
Stefan: "There's not."
Rebekah: "So women in the 21st century dress like prostitutes, then? I got dirty looks for wearing trousers."
Klaus: "You wore trousers so women today could wear nothing."

Katherine: (to Stefan) "I've heard about that sister. Be careful. She'll ruin you."

Damon: (to Bill) "So, Bill, I hear you're into the whole daddy-daughter vampire-torture thing."

Rebekah: "I am not a brat!"
Klaus: "A thousand years of life experience says otherwise."

Tyler: "You want me to kick his ass?"
Caroline: "Yes. I mean, no. I bought him the shirt he's wearing and it was really expensive."

Stefan: (about the other Originals) "Why don't you un-dagger them?"
Rebekah: "Because he would hunt me down and kill me. He's a vindictive little bastard, my brother."

Bill: (to Caroline) "Don't worry. I'm going to go back home before somebody kills me."

Caroline: "Daddy. I'm going to be okay."
Bill: "You're a vampire, sweetheart. I don't think you'll ever be okay again."

Damon: "So, Mayor Lockwood called your gay ex-husband to torture your vampire daughter?"
Liz: "Yes. I've been keeping him detained to make sure the vervain's out of his system, so you can, you know..."
Damon: "Can't we just kill him?"
Liz: "No, Damon. He's Caroline's father."
Damon: "He sounds like a douchebag to me."
Liz: "Yeah, well, just 'cause you and I are on okay terms, doesn't mean I'm suddenly a big advocate for your lifestyle."
Damon: "Is that what you told him when you two got divorced?" 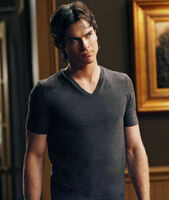 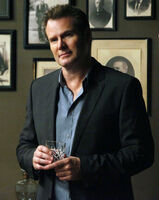 Katherine in a phone booth in Chicago. 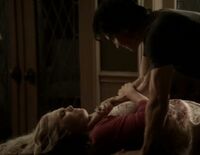 Gloria getting ready to torture Stefan 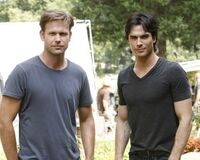 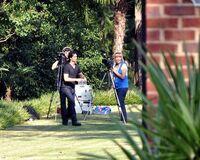 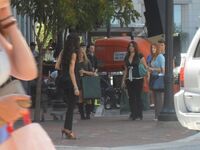 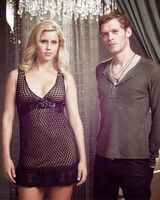