In Bring It On (in Season Four), a bored Elena threw a wild party and she later got into an ugly fight with her friends.

Throughout The Vampire Diaries

In Bring It On, after causing trouble at the cheerleading competition earlier, Stefan brought Elena back to the boarding house to try to talk sense into her. Having turned off her humanity, Elena was indifferent to his concerns and ignored his speech in favor of texting invitations to a party at the house to random people. The guests showed up unexpectedly for the party and Elena quickly joined in on the fun. At first, Stefan and Caroline were uneasy about the idea, but since the majority of the guests couldn't be compelled to leave due to the vervain in the town's water supply, they eventually gave in and started to enjoy themselves. The two shared a dance and talked to each other about Stefan's tense relationship with Elena, and Caroline assured him that he would be okay eventually. Elena seemed briefly perturbed to see them together, but she quickly got over it and referred to Caroline as Stefan's "rebound." Sheriff Forbes somehow caught wind of the party, and when she arrived to find evidence of underage drinking and drug use, she immediately informed Elena she was shutting the party down. Elena, who, without her humanity, had no regard for Liz or their history, callously threatened to feed on her until Caroline showed up to stop her. She then took advantage of Caroline and Stefan being preoccupied with Liz's condition and fled the house. Shortly afterward, Caroline and Stefan realized that the party was always intended to distract them so she could get out of the house and leave to go look for her.

Later on, Damon came home to find the party still going on and briefly joined in, but was interrupted by Rebekah, who had followed him to continue nagging him about finding Katherine and the cure. Damon questioned her on her reasons for wanting to be human, and pointed out many of the human guests at the party in order to demonstrate that humanity was simply ordinary, while Rebekah being an Original was extraordinary and something she shouldn't be so quick to give up. 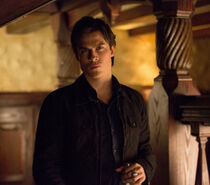 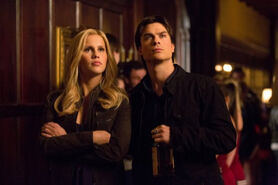 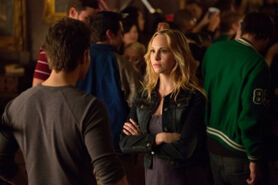 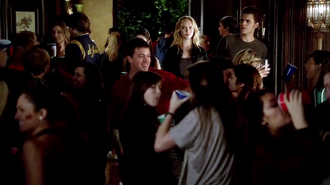 Retrieved from "https://vampirediaries.fandom.com/wiki/Elena%27s_Wild_Party?oldid=2646647"
Community content is available under CC-BY-SA unless otherwise noted.