Siblings (Strained Relationship), Former Allies/Enemies; They have always cared about each other because they are family despite not always being on good terms, Elijah thought Kol was too reckless and was a bad influence on Klaus, Kol was mad at Elijah for choosing to sacrifice Davina to kill Lucien and it appears he has not forgiven him for it entirely. Despite their differences, Kol was saddened at the prospect of Elijah's death.

The day Kol was born

This is the relationship between two Original Vampire brothers, Elijah Mikaelson and Kol Mikaelson. Elijah revived Kol in Bringing Out The Dead, after he had spent more than a century being dead. They have a difficult relationship. Kol looked up to him and Elijah seems to hold him in distaste. In Ashes to Ashes, Davina said that Kol hates Elijah. Despite their possible, original feelings for hatred for each other, after Kol's resurrection, they become allies and grow closer as siblings for the first time in centuries.

Throughout The Vampires Diaries Series

In Catch Me If You Can, during a tense confrontation between Kol and Rebekah, Rebekah threatened Kol with a dagger. Kol was infuriated by this, saying that the search for the cure was ripping their family apart and that Elijah was gone because he was disgusted by his family. Kol was visibly upset about his older brother's feelings toward them.

In American Gothic, Elijah heard about Kol's death and acknowledged that he knew what it was like to lose a brother, though his grief would mostly be directed towards Henrik, instead of either Finn or Kol as he was very forgiving and sympathetic towards Elena's own loss of her younger brother, despite the role she had in killing both Finn and Kol.

In Pictures of You, when Elijah wanted to hear his siblings' reasons for wanting the cure, Klaus mentioned that he wanted to give it to Silas so Silas would stop tormenting him. He explained that Silas wanted to destroy The Other Side, which would bring all supernatural creatures back from the dead. He specifically mentioned to Elijah, knowing how much Elijah loved family, that Finn and Kol would be brought back and reunited with them but despite this, Elijah still refused to help Klaus.

In Rebirth, Kol returned from the Other Side with the help of his mother, being put into the body of a witch named Kaleb. Elijah remained unaware that his brother was alive through the episode. In Alive and Kicking, Kol took Davina Claire on a date to learn information from her but they were attacked

by a group of werewolves. After Kol had been tossed aside with ease due to his new body not being strong, he watched as Davina summoned Mikael, who she had revived herself. His father slaughtered the werewolves before Elijah showed up. Elijah shared Kol's surprise at seeing their father alive. Once Mikael had fled, Elijah noticed Kol but didn't recognize him in his new body.

Elijah remained unaware that his brother was alive until Every Mother's Son, when Finn revealed that Esther had also brought Kol back to life, and that her plan for her children was so justified that it had caused even the wildest of the siblings to see the errors of his vampire ways. He still didn't know that he'd already met Kol in his new body.

In Chasing the Devil's Tail, Kol was taken captive by Marcel and brought to the compound. Elijah and Klaus arrived and saw that he was a prisoner, along with Finn. In The Brothers That Care Forgot, Elijah and Klaus tried to turn Finn and Kol to their side. Though Elijah had to leave in the middle of the interrogations, Kol eventually joined them against Esther.

In Brotherhood of the Damned, both Elijah and Kol were brought, along with Klaus, to Finn's magical astral

plane. While there, they talked about Kol's recent actions of putting Rebekah's spirit into an unknown body and keeping her from reuniting with her family. Elijah hypocritically displayed a great amount of resentment toward Kol for his action against Rebekah and actually seemed satisfied when Finn made Kol experience pain.

In I Love You, Goodbye, after Kol's condition worsened and Rebekah informed Elijah and Klaus that Kol wouldn't make it through the night, they together rushed to their dying brother.

They brought Kol back into their "always and forever" saying once again (Kol not having been included since becoming a Vampire) and stood with him in his final moments, mourning him. Kol told them that all he ever wanted was for them to care about him just before he died in Rebekah's arms.

In Ashes to Ashes, Elijah emotionlessly sabotaged Davina's plan to resurrect Kol so he could use her to resurrect Esther instead. Sacrificing Kol in the process.
In An Old Friend Calls, Elijah reunited with Kol, commenting that he hadn't aged a day. Later while Kol was helping his family with the letters, Elijah jokingly asked him if he missed being dead yet. Kol also agreed with Elijah about a statement he had made earlier, much to Elijah's amusement while Klaus remarked they both had no taste. In Alone with Everybody, Elijah tries many times to calm down Kol. However, they get into an argument on what they should do about Finn Mikaelson's (their eldest brother) return as an Original Vampire. After Elijah's numerous attempts to calm Kol down, something unexpected happens. Kol confesses to Elijah that he is feeling the heightened emotions of rage more so than ever before. Elijah gives Kol advice on how to handle Kol's bloodlust, rage, and his heightened longing for revenge against Finn, for Kol and for Davina's sake. In The Bloody Crown, Elijah and Kol ally together when Marcel threatens Klaus and the rest of the Mikaelson family. After fighting with Klaus' former sireline, both Elijah and Kol are bitten by Marcel and are suffering from the Beast bite. They bond together as well as suffer together as Hayley assists Freya in finding the cure to the Beast bite. Unfortunately, there wasn't enough time to find the cure and Klaus sacrifices himself to preserve all of their lives. Currently, Kol and Elijah are slumbering until Hayley finds a cure for them all.

In No Quarter, Elijah, Kol and Rebekah are feeding on prisoners and prison officers in order to regain their strength to save Klaus. Kol doesn't want to return to New Orleans right away because he doesn't want to die a third time. But Elijah makes the final decision that they will free Klaus that day, which Kol visibly disagrees with. Later, Elijah and Kol are seen with Freya and Hayley, forcing Josh to give them access to the tunnels. Elijah compliments Marcel for being a genius while also being sadistic, to which Kol immediately responds for Elijah to save his compliments until Marcel comes to kill them as they might please him, which Elijah found amusing. When Josh returns Elijah and Kol both agree that they need to do something about Josh. Kol recommends that they kill him, but Elijah says that he is important to Marcel so he asks Kol to watch Josh and Kol agrees. Kol later threatens Josh, after Josh received a coded message from Marcel, that if anything happens to his family, including Elijah, that he will burn the city to the ground. Kol is later seen with Rebekah waiting for Elijah and the rest of their family outside of a drainage pipe. When Elijah arrives with Klaus, Kol and Elijah slightly embrace and they begin to leave but Marcel gets in their way. Klaus makes a deal with Marcel to leave and never return and Elijah and Kol leave with the rest of their family.

In The Kindness of Strangers, it was revealed that Kol never tried to keep tabs with the amnesiac Elijah, as they never had much in common, when Elijah asked him about it, and it was shown that Kol still had not fully forgiven his brother for having sacrificed Davina, although compared to the last time he was angry at his brother, he acknowledged that Elijah's apology mattered when Elijah asked if he had apologized. Nevertheless, he looked sympathetic towards Elijah as he regained his memories. In Til the Day I Die, In When The Saints Go Marching In, as Elijah is about to die along with Klaus, Kol was visibly saddened by the fact that he would lose not only Klaus but also Elijah as well. Elijah asked Kol to take care of Hope or else he would haunt him, which Kol agreed to do.

Kol to Rebekah: "Look at what this family has become. I mean, Elijah won't even show his face; he's so disgusted by our bickering."

- Catch Me If You Can

Elijah to Kol : "Is there no limit to your violent imagination brother ?"

Kol to Elijah: "Oh bother Elijah, is all this truly necessary ?"

- For the Next Millennium

Elijah : Whatever it is your planning...? Don't.

Elijah : Perhaps . And perhaps the best revenge is simply to expel him from our lives altogether?

Kol : No. He doesn't get to live happily ever after.

Elijah : I haven't made my decision , i only ask that you stay your hand.

Kol : That's not your decision to make!

Elijah : Control yourself!.... Unless you can't.

Kol : Its worse than i remember . The rage ... the hunger . Id like to blame my anger on Finn , but its been growing worse since i came back . I never did learn to keep it in check . I never really cared to.

Elijah : But now you do.

Kol : I couldn't live with myself if i hurt Davina . But , hurting the ones we love , whether we mean to or not , That's just what we do . Isn't it? 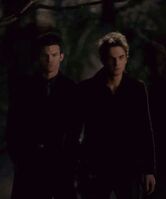 Retrieved from "https://vampirediaries.fandom.com/wiki/Elijah_and_Kol?oldid=2784398"
Community content is available under CC-BY-SA unless otherwise noted.