It has been suggested that this article be merged with Elijah Mikaelson/Relationships. If you disagree, leave a message here.

Red Door (In a flashback in the 10th Century)

Former Lovers; Ended (Both are dead)

The relationship between the Original Vampire, Elijah Mikaelson and the doppelgänger-human, Tatia.

Although not much is known about their early relationship or how their relationship developed, Tatia and Elijah lived in the same village, later to be known as Mystic Falls, in the 10th century. Tatia was originally married with a child, however some time after the death of her husband in battle, she formed a relationship with Elijah.

During a party, Tatia is first seen dancing around a fire while the village celebrates the Samhain, with Elijah watching her in the distance from a pig pen. Tatia takes away her mask to smile at Elijah, although Klaus, dancing beside her, swings her arm around and begins to kiss her. Elijah's smile drops as he turns away and begins to feed the pigs. Tatia soon breaks the kiss and stops dancing with Klaus as she realizes Elijah is no longer watching her, and she takes off her mask to search for him.

Finding him beside the pig pen, she playfully quizzes if he is to save Loki the pig from his fate. Smirking, Elijah responds Loki's fate is to become food, while admitting that her fate is to love another. She turns the tables and asks if his fate is to watch from the shadows, "the noble martyr", before explaining she does not let fate dictate her heart. After her husband died, she was expected to throw herself on the pyre, although she chose to live and open her heart again, to someone "strong, protective, fierce, yet noble and gentle" before announcing that she chooses Elijah. Elijah is elated and moves in to kiss her, she backs away laughing at their unromantic spot. He smiles and kisses her anyway. He breaks the kiss and tells her they should let Loki the pig free as fates change, before kissing her again.

The morning after Klaus first transformation into a werewolf, Tatia comes across the torn apart bodies of some of the villagers that Klaus had killed. Tatia runs after seeing Elijah as she's now afraid of him, telling him that she didn't think the blood she gave his mother would turn him into a monster. While running Tatia falls down and cuts her hand drawing blood. Elijah new to being a vampire and doesn't have the control to resist the scent of Tatia's blood. He begs her to run but before she can he attacks her and begins feeding on her as she screams.

Elijah later brings her lifeless body to his mother hoping that she can help Tatia but she's already dead. He's shocked and horrified that he killed her. So Esther takes away the memory of him killing Tatia and taking the blame herself and she tells him to clean himself up. Through the centuries due to his mother taking away his memory, he believed he had just compelled Tatia to forget what she saw.

In Bringing Out The Dead, Klaus and Elijah while having dinner with Damon and Stefan Salvatore, briefly recall their relationship with the original doppelgänger, Tatia, while conversing about the Salvatore's shared affections for Tatia's descendants, Elena Gilbert and Katerina Petrova.

Elijah firstly sees no purpose in discussing matters resolved and so far into the past, however begins to share information of the first doppelgänger. He shares that Tatia was an exquisite beauty, and every man her age desired to be her suitor, despite already mothering a child with another. After commenting "none loved her more than Klaus", Klaus interrupts that there was at least one other, while looking pointedly towards Elijah. Elijah then explains their mother, Esther's actions in using Tatia's blood and killing her, in order to end the feud caused by their shared affections, and negative impact it was having upon their relationship.

In Red Door, the details of their relationship are explained and the truth to how she really died is revealed.

In Chasing the Devil's Tail, Elijah has a flashback of Tatia as he remembers what he did to her. He cries and is clearly still in love with her.

In Gonna Set Your Flag On Fire, Elijah has another flash of Tatia and because of this flash he almost attacks Camille.

In Brotherhood of the Damned, Elijah tells Camille him and Tatia were in love. He also tells her he accidentally killed her.

Tatia : "Do not tell me you came to save Loki the pig from his fate?"

Elijah : "No. I'm afraid Loki the pig is fated to be food. Just as you are fated to love another."

Tatia : "And you? Fated to watch from the shadows? The noble martyr? Fate does not dictate my heart Elijah. I was fated to throw myself on a pyre after my husband died in battle but I did not. I chose to live and I chose to give my heart once more. To someone strong, protective fierce and yet noble, and gentle. I choose you Elijah."

Tatia : "And you choose to have our first kiss where your mother slaughters the pigs? Not very romantic."

Elijah : "Perhaps we should set Loki the pig free? It seems one's fate can change after all."

Tatia : "What have you become?"

Tatia : "Your mother asked for my blood. She said nothing of the dark magic that would turn you into a monster!"

Tatia and Elijah after she discovers his vampirism 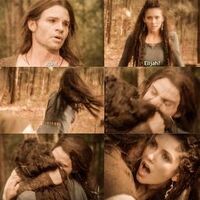 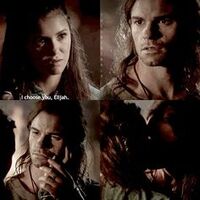