The Vampire Diaries Wiki
Register
Don't have an account?
Sign In
Advertisement
in: Supernatural, Objects, Enchanted Objects,
and 3 more

Esther's Talisman is a silver necklace which was created by Ayana, being passed down to her mentee, Esther. At some point before her death, Esther had handed the amulet down to her daughter, Rebekah, for safe-keeping.

During the early 1920s as Rebekah and Klaus tried to evade their vengeful father, Mikael, Rebekah had lost the talisman during their escape. Stefan Salvatore found it, not knowing it was Rebekah's due to Klaus' compulsion, and gave it to Elena Gilbert many decades later.

In Friday Night Bites, after filling the amulet with vervain, Stefan had later given the necklace to his girlfriend, Elena Gilbert, who had worn the necklace throughout most of the series. Stefan filled the necklace with vervain because he didn't want Damon, or any other vampires, to compel Elena.

In Rose, After being abducted by Rose and Trevor, the necklace was snatched off and thrown to the floor by Elijah so that he could compel her. It was later retrieved and returned to her by Damon Salvatore.

In Know Thy Enemy, when Katherine abducts Elena, she steals her necklace, and when she was kidnapped by Klaus' witch, she loses the necklace in Alaric's place.

After the necklace was stolen by Katherine Pierce, Damon Salvatore had once again returned the talisman to Elena as a birthday present.

In Disturbing Behavior, a powerful witch named Gloria attempted to locate the necklace by using Rebekah as ammunition. When the necklace burned Elena, Bonnie offers her help to find out what was wrong with it. Later, as Bonnie attempts to find the origin of the necklace, the amulet suddenly begins to float within mid-air revealing to Bonnie that it has its own magic. The following day, as Katherine masquerades as Elena, she cleverly swipes the necklace from Bonnie.

In Ghost World, Sheila Bennett returns through Bonnie's manifestation spell. Together, they perform a spell that would destroy the Original Witch's talisman. However, the talisman reconstructs the damage and appears intact and unharmed, though it was enough to break Esther's connection to the mortal plane.

In Ordinary People, in a flashback, Rebekah is slightly burned as she gently touches the necklace. Esther is then seen wearing the talisman while asking for Ayana's help to protect her children.

In Homecoming, the necklace was given by Elena to Rebekah, who she then stabs with the White Oak Ash Dagger, neutralizing her.

In The New Deal, the necklace appears in one of Bonnie's Dreams, in which it was in a coffin that was occupied by Klaus.

In All My Children, Rebekah threw the necklace in the cave so that neither she nor any vampire could take it.

In Yellow Ledbetter, Damon is stuck in 1994, and everything that was in 1994, was there, which means the necklace was there too. Damon went up to Stefan's room and took the necklace out of the box and held it in his hand.

In The Next Time I Hurt Somebody, It Could Be You, the 1994 prison world copy of the necklace is seen for the first time since Season Six when Caroline gives Damon the necklace as a Christmas gift. He didn't know what is was until he gave it to Sybil as her Christmas gift. She opened it and was mesmerized by it, and as Damon was putting the necklace on her, he remembered giving the necklace to Elena, and knew that it didn't belong on Sybil. He then kills Sybil and leaves Mystic Falls with his brother.

In We Have History Together, Damon continues to hold on to the necklace. Stefan tells him that It triggers his conscience (a connection to Elena) and that it's causing him to hold back against killing in Arcadius' name. After a brief argument with Stefan, Damon chunks it from the car window out into a field, pleasing his brother. The next day, he returns without Stefan and finds the necklace.

In We're Planning a June Wedding, Damon loaned the necklace to Caroline as "something borrowed" for her wedding and assured her that Elena would be happy for her.

In I Was Feeling Epic, Elena left the necklace on the tomb at Stefan's Memorial.

In For the Next Millennium, Rebekah was seen wearing the necklace in a flashback while the original siblings arrived in France in 1002.

Former Owners of the Necklace 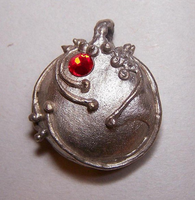