Sisters, Family, Former Allies/Enemies; They love and care about each other, Esther betrayed Dahlia by choosing to marry Mikael nearly over a thousand years ago (Dahlia went after Esther and her children as revenge for this), They made peace with each other in death and are currently at peace together as well.

When Esther was born

The sisterly relationship between the witches, Esther and Dahlia.

The sisters belonged to a powerful witch line and as they grew up very young learning the mystical arts. Esther felt insecure and jealous in her abilities in comparison to her prodigious sister and as a result did not take her practice of witchcraft as seriously. However its assume that sisters didn't have a rivalry and had an happy childhood. Between the late 960s and the early 970s A.D., when they were young adults or teenagers Viking warriors attacked their village and killed everyone in it. Dahlia and Esther then hid behind a wheelbarrow, the two sisters promised each other that they would remain together no matter what happened, "always and forever." When a Viking found the sisters and attempted to attack Esther, Dahlia used her magical telekinesis to shove him away from her, which led the Vikings to take both girls prisoner rather than killing them like the rest of the villagers. The girls were taken to a nearby hovel, where Dahlia agreed to do the dark magic that the Vikings wanted from her to ensure that Esther wouldn't be harmed; instead, Dahlia took the abuse from the Vikings in Esther's place to protect her from most of the horrors of their situation.

One day, while toiling in the hovel while Esther picked herbs for her outdoors, Dahlia managed to stealthily infuse potent sage with serpent's blood to give herself and Esther the magical strength necessary to escape their captivity. However, when Esther returned and Dahlia explained her plan, Esther instead confessed that she no longer wanted to practice witchcraft because she had fallen in love with one of their Viking captors, Mikael, with whom she planned to marry and start a family. Dahlia was emotionally devastated by this revelation and begged Esther to stay with her, reminding her of their promise to stay together forever, but though Esther assured her they would always be sisters, she left despite Dahlia's pleas and married Mikael in 971.

In 972, after a year of marriage Esther came to her sister because she was worried to not being able to bear children. She asked her sister for help but the latter was obviously disappointed of Esther's life choice as wife and mother and the fact that she never truly used her witch potential. She told her sister that she could help herself but Esther insisted - saying that she knew that Dahlia would never abandoned her. Finally, Dahlia accepted to make her sister fertile but warned Esther that it will require a high sacrifice. Some time later, Esther became pregnant and gave birth to the first of her seven children; Freya. Five years later, when Esther was pregnant with her third child, Dahlia came to take her payment and took her niece, Freya. When Esther tried to interpose herself Dahlia told that their deal work not only for this first born but for every first born of each Mikaelson generations so long as Esther's bloodline continues to live. Esther swore to her sister that she will come back to magic and will make her pay. Unimpressed, Dahlia merely mocked Esther and warned her to not come after her because if she would then Dahlia will take all her children. Dahlia then took Freya away while the latter screamed for her mother.

In Wheel Inside the Wheel, a young Esther comes to Dahlia to ask for her help. Despite being married for a full year, Esther has not conceived a child with her husband. Dahlia refuses at first but decides to help her after Esther begs and tells her that the price is heavy. Esther agrees and Dahlia embraces her, telling her she could never refuse her "precious little Esther."

At the end of the episode, after a confrontation with her son, Niklaus, Esther remembers back to when Dahlia had taken her firstborn child as payment for her newfound fertility and then cursed her bloodline. Her other son Finn comes in and she says that had Klaus' child had lived, Dahlia would come for them all, appearing terrified at the possibility of her sister's return.

In City Beneath The Sea, Dahlia shows Klaus her memories of his mother and her. Watching these memories makes Klaus realize that Freya's blood won't work for his siblings' plan. It's Esther's blood they need.

In Ashes to Ashes, Elijah arranges it for Esther to be brought back to life by manipulating Davina into using the wrong ashes as she planned on bringing Kol back to life. Esther and Dahlia see each other for the first time in centuries. They're shocked to see each other, and for a moment, it looks as though Dahlia's about to cry. However, in reality, she actually begins to laugh hysterically and mockingly asks if Esther was a gift to her, possibly in an attempt to cover up her true feelings about her sister. Dahlia then attempts to kill all of Esther's surviving children. After a short argument with Dahlia, Esther then lunges forward and wraps the long chain that connects her manacles around Dahlia's neck and chokes her with it. This forced Dahlia to release her magical hold on Freya, and she quickly uses her own magic to break the magic circle binding her and cure her siblings of their white-oak-induced sickness. They all begin to cough up blood and sawdust, but they seem to be healed. Esther is struggling to keep Dahlia at bay, and turns back toward her children, calling out to Elijah to finish off herself along with her sister. Klaus does the job and in Afterlife Norway the two sisters in their young adult forms finally make peace with each other after Esther makes amends to Dahlia. Back at the warehouse district, their bodies have both turned to ash, are still standing in an embrace, both looking more content as they've ever been.

Esther: "If you do this, if you take my daughter, I swear to you, I will return to the black arts. I will grow in power as a witch, and I will make you pay!"
-Wheel Inside the Wheel

Esther: (to Dahlia) "You'll always be my sister, Dahlia, but I wish for children of my own."

-City Beneath The Sea

Esther: "You still carry around so much anger for me? After all these years?"
Dahlia: "You broke your vow. We were to stand together, always and forever, but you left to marry that brutish Viking imbecile."

Dahlia: (to Esther): "You ended my family and they were the result."

Esther: (to Dahlia) "You have won, Dahlia. You have everything you've ever wanted, including the firstborn of a new generation. You have bested us all." 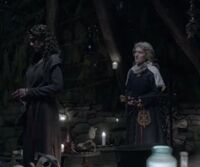 Retrieved from "https://vampirediaries.fandom.com/wiki/Esther_and_Dahlia?oldid=2766958"
Community content is available under CC-BY-SA unless otherwise noted.